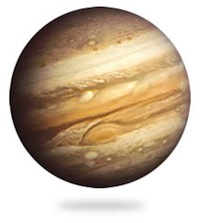 Turbulent Jupiter is a gas giant - meaning that it is not composed of rock or other solid matter. It is the third brightest object in the night sky after the Moon and sparkling Venus, and is the largest planet within the solar system. Jupiter's outer atmosphere is home to a massive storm called the "Great Red Spot" that has existed since at least the seventeenth century! Jupiter was named after the Roman God, and served as the patron deity of the Roman State. In other words, Jupiter ruled over laws and social order much like Zeus for the Greek State.

In astrology, Jupiter is the planet of faith, positivism, hope, and morality. It rules Sagittarius and is exalted in Cancer. Jupiter represents the principle of expansion, versus contraction (as represented by Saturn), and the aspirations of the higher self. This could include a sense of humor, good will, or mercy. On the flip side, Jupiter can also be associated with irresponsibility in the form of blind optimism and overindulgence. Its position in the chart indicates how one's faith, generosity, and tolerance will be expressed, as well as what modes of activity will stimulate self-confidence and wisdom.