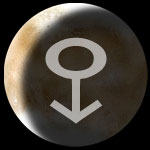 Notes on the new planet
by Henry Seltzer

If we take a look at the mythology of the newest planet in our Solar System (even though they are calling her a dwarf) and the events surrounding her discovery, from 2003 – 2006, the idea of potentially violent struggle is indeed paramount and as well the ideal of the vital female warrior. Before being officially named Eris last fall, after the Goddess of Strife and Discord, the new planet, designated 2003 UB313, was called Xena, and the name Persephone was considered. Since Persephone and Xena, the warrior princess of popular culture, are involved in the early naming of Eris, the archetypal image comes to the fore of a perhaps damaged and certainly militant feminism that does not shrink from violence. As for events, the time frame of the discovery matches that of the Iraq War, which can certainly be viewed as a violent struggle for resources.

When Pluto was found in the 1930's, its discovery introduced some dark notions regarding the human condition, of a depth and a power that were previously unacknowledged. It stands to reason that Eris, found even farther out into the dark void at the edge of the solar system, will also. Just as we have grown through our understanding of the astrological Pluto, so too we will grow as we come to integrate the Eris archetype into modern Western Astrology.

The astrology of Eris seems to be related to the no-holds-barred fight for continued existence that is fundamental in all natural process, and for making a stand for what one believes, even if violence is involved. As the sister of Mars, the God of War, Eris willingly sought the battle. There is a side of nature that is quite harsh, a struggle for survival, and this struggle is a fundamental part of the human condition as well, for we are still half animal. Nature can be viewed in a rosy light, as it was in the hippie movement of the sixties, Bambi drinking from a little stream, but underlying this beauty is the possibility of sudden death at any moment since all of nature's children need to eat. Eris is related to this principle, and to the concept of the female warrior that embodies it, and especially to the feminist struggle for rights in a patriarchal society.

In the charts that follow, I will introduce a provisional glyph for Eris, my contribution until one is officially accepted. This glyph:

is a combination of the glyphs for Pluto, Mars and Venus, as seems fitting for the sister of Mars and astrological cousin of Pluto.

A perusal of these charts confirms the idea of militant feminism as one keyword for Eris. Andrea Dworkin is known as one of the most militant and even violent of feminists, and she has a very strong placement of Eris, opposed to the rest of the planets (see chart 1 below). Betty Friedan and Gloria Steinem, although not thought of as violent at all, are other important figures in the history of feminism. Eris is conjunct Venus and opposite Saturn in Friedan's chart, while Gloria Steinem has it conjunct the Sun. Angela Davis, the revolutionary feminist, socialist, and U.C. professor, accused of smuggling a gun into the 1970's courtroom where Black Panther George Jackson was on trial, has the Sun trine a close Mars-Uranus conjunction, with Eris at the midpoint, in close sextile to both Sun and Mars (see chart 2).

Violence in cinema is another hallmark of our recent history, Kill Bill for one example among many, which features a strong and violent female protagonist played by Uma Thurman. The charts of filmmakers like Kill Bill creator Quentin Tarantino, and Luc Besson, who made La Femme Nikita with another woman warrior central character, do in fact show a prominent Eris (see charts 3 and 4). Tarantino has Eris conjunct the Sun and Mercury, in exact quincunx to Pluto and septile and parallel Saturn, while Besson has Eris near the top of the chart, in a T-square with Moon and Saturn, trine Uranus and quincunx Neptune. David Lynch, born in 1946, is another filmmaker whose career has also been marked with a penchant for violence portrayed as a twisted and yet perhaps natural consequence of life (he made Blue Velvet and Wild at Heart in the 90's). He also has a strong placement, with Eris in the fifth house of artistic production, sextile the Sun, exactly quincunx the Moon, parallel the Sun and Venus, contra-parallel Saturn and opposite Neptune (see chart 5). The archetypal connection between Eris and Neptune, here via the opposition, would logically be an indicator of violent filmmakers, but note that this is a long-lasting aspect, possessed by an entire generation of individuals born from about 1943 to 1950. Of course, this is the classic period of Film Noir, and the motif of violent death, the femme fatale, and the struggle for survival fits well with the astrology of Eris as we are coming to understand it.

The Eris archetype can manifest as a reaction to established authority, not necessarily violent, by those, especially women, who speak truth to power. The conjunction, parallel, or dynamic aspect with Saturn is of course one indication of this type of individual, as found in the charts of revolution-oriented singers Bruce Cockburn (square Saturn) and Tori Amos (exact parallel with Saturn). Cockburn, who famously penned "If I had a rocket launcher," and "Tie me to the crossroads when I die," has Eris also sextile Sun, and in a Grand Trine with Pluto and the Moon. Feminist and revolutionary Emma Goldman had Eris in partile square with Saturn. New Thought exponent Marianne Williamson, who is vocal in her opposition to the established patriarchy, has Eris in partile opposition to Saturn, while revolutionary spirit Jane Fonda has the conjunction. Noted revolutionary singer Ani DiFranco has Eris all over her chart, although not in aspect to Saturn (conjunct Chiron, opposite Uranus, square Moon, focus of Yod from Venus and Mars/Mercury, all close aspects).

Another individual who might typify the lust for violence as part of the struggle for survival was T.E. Lawrence. As portrayed in the movie Lawrence of Arabia, he could not help himself; he was seduced by the act of violence and also disdained any fear of it. We might expect a strong Eris placement, and indeed, it is the focal point of a Yod from Mercury and Uranus, and stands alone at the very top of the chart, conjunct the MC (see chart 6). Interestingly, the actor Peter O'Toole, who famously played Lawrence, has a fairly prominent Eris is his chart as well, with Eris quincunx Mercury and Neptune, trine the Moon and square Venus. Since Eris is in the Twelfth House in O'Toole's chart, and thus a hidden side of his nature, it might be more likely to come out in fantasy, or acting, rather than in 'real' life, as was indeed the case (see chart 7).

The Middle East that Lawrence was so involved with has of course its own long history with violence. Most recently, the Iraq war, so violent and so controversial, seems like the very embodiment of the Eris archetype. Transiting Eris has been sextile U.S. Mars, representing the military, and conjunct U.S. Chiron for the entire period of this war, suggesting the agony of the U.S. public reaction to the violence of the events surrounding the military at this time. And transiting Pluto will be in partile conjunction with U.S. Eris at 8+ degrees of Capricorn in June of 2012, just as its square with transiting Uranus perfects, suggesting that our troubles in this area are far from over.

Another individual who spoke of violence as a beautiful and terrible as well as an integral part of nature was the 18th century poet William Blake, who had Eris closely conjunct Pluto, trine Mars and square Uranus. He of course wrote the famous lines:

Tyger! Tyger! burning bright
In the forests of the night
What immortal hand or eye
Dare frame thy fearful symmetry?

In a particularly articulate expression of this dark side of nature and the struggle for survival, I offer the following quote from the artist Piet Mondrian, who was a philosopher and theosophist as well as a primary abstract painter of the 1920's and 30's. He had Eris conjunct Mercury and the Sun in the first house of his chart. He wrote (in 1920) that any intense involvement with living things is involvement with death. If you follow nature, you have to accept "whatever is capricious and twisted in nature." If the capricious is beautiful, it is also tragic:

If you follow nature you will not be able to vanquish the tragic to any real degree in your art. It is certainly true that naturalistic painting makes us feel a harmony which is beyond the tragic, but it does not express this in a clear and definite way, since it is not confined to expressing relations of equilibrium. Let us recognize the fact once and for all: the natural appearance, natural form, natural color, natural rhythm, natural relations most often express the tragic . . . We must free ourselves from our attachment to the external, for only then do we transcend the tragic, and are enabled consciously to contemplate the repose which is within all things.

Through all this it seems that while the lower expression of Eris might manifest as the lust for struggle and violence, there is also a more positive manifestation in the most basic defense of one's rights in standing up to established power, by violence if necessary (just as with the Mars archetype). By recognizing and coming to terms with this potentially violent factor in ourselves we can grow as humans and become more whole.

These intimations of meaning for this new planetary archetype will be fleshed out in the future, as more information and research comes to light. But already we have a start.