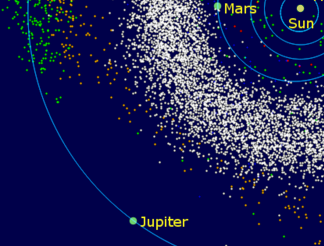 The four major asteroids, Ceres, Pallas, Juno and Vesta, were discovered within a few years of each other at the beginning of the 19th century, and named for female goddesses in the Roman pantheon. Their discovery has been synchronous with the rise of the women's movement in the West. These four asteroids seem to symbolize four different facets of the feminine and represent a fresh way of regarding the feminine principle in astrology, going beyond the relatively simple categories of wife and mother, as represented by Venus and the Moon. The major asteroids are the four largest asteroids in the asteroid belt (located between Mars and Jupiter shown in white) and their qualities are described below.