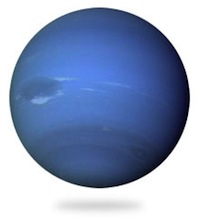 Neptune is the eighth planet from the Sun in the Solar System, and is seventeen times the mass of Earth. While Neptune boasts the strongest winds of any other planet in the solar system, it also has an intense bright blue appearance that is attributed to trace amounts of methane in its atmosphere. The planet is named after the Greek God of the Sea Poseidon, and its astrological symbol is a stylized version of Poseidon's mighty three pronged trident.

Both God of the sea and the ruler of Pisces, Neptune finds exaltation in Cancer. Neptune, associated with universal love, is said to be the higher octave of Venus, which rules individual love. Neptune represents the universal ocean of oneness with all beings. Therefore, Neptune is highly compassionate, idealistic, and imaginative. It is considered a planet of inspiration, dreams, and psychic receptivity. Neptune rules spirituality, and all things subtle. The more negative manifestations of Neptune include deception, trickery, deceit, guilt, and addiction associated with drugs, alcohol, or even media and fantasy. Its position in a person's chart would indicate where there may be confusion or illusion, and also great creativity in the poetic and musical fields.