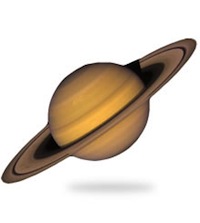 The beautiful and severely wind beaten Saturn is the sixth planet from the Sun and the seventh and last planet of ancient astrology. The celebrated day Saturday gets its name from the planet, and it is known for it's prominent and stunning ring system, consisting mostly of ice particles, rocky debris, and dust. Although the ancient order had no telescopes to see Saturn's famous rings, Saturn still became known as the planet of boundaries, which is symbolized by the ring. Saturn is the second largest planet in the Solar System, after Jupiter. It was named after the Roman god Saturnus, equated to the Greek Kronos, the Titan father of Jupiter (Zeus). Saturn's astrological symbol represents this god's sickle, as well as the elevation of the cross of Matter above the semi-circle and openness of Spirit.

Saturn is the ruler of Capricorn, and is the planet of limitation and restriction. This can include themes of responsibility such as self-discipline, punctuality, and the conservation of material resources. While Jupiter represents the notion of broadening and expansion, Saturn suggests setting parameters and restriction. It brings structure and meaning to the world around us, and reminds us of our responsibilities and commitments. Because of this, Saturn is frequently associated with our Fathers, or other authority figures. While discipline isn't always easy or pleasant, it can sometimes help us grow. Embracing and understanding the challenges of the responsibilities in our lives helps us to expand ourselves out of the foundation of structure!