The Sun in Astrology 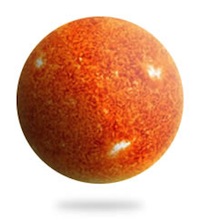 The Sun represents the Self, one's way of being in the world. It can represent, on different levels, both the ego and the higher Self or soul purpose. It rules Leo and is exalted in Aries.

The Sun is the most important 'planet' in the chart and symbolizes one's will and sense of vitality. When the Sun is afflicted (poorly placed or poorly aspected) it could indicate problems with the father, or male role model.

The symbol for the Sun comes from ancient times, and is very similar to the Jungian symbol for individuation. This is because the Sun represents the hero archetype, which can be read as the story of transcending the little self, or ego, in favor of greater integration and the true Self. In myth, the hero typically must meet and overcome obstacles on his or her quest, which in natal charts can be indicated by the planets that make close aspects to the Sun, especially the stressful ones.

The Sun energizes your entire chart, and planets in close relationship to the Sun (by planetary aspect) are emphasized in your personality. If your Sun is prominent in your chart, you will exhibit great power to do and to be.