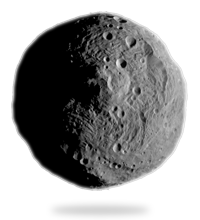 The asteroid Vesta was the last of the four major asteroids to be discovered, in 1807. The mythology of Vesta (or Greek Hestia) is as follows: one of the sisters of Jupiter and Juno, Vesta chose to remain a virgin and not marry. She was the goddess of the hearth fire, which was of utmost importance in ancient times, connoting hospitality and the basic vitality of the home or city-state, and her astrological symbol is the flame. It is interesting to note that Vesta is the brightest of the four asteroids. Her symbolism also suggests the "vestal virgin" temple priestesses of the ancient Geek world, and their commitment to no man, but to their own inner flame of service to the goddess. Their service might even be of a sexual nature, but they remained untouched by any sexual intimacy with another person.

In accordance with its mythology, the asteroid Vesta is involved with both the signs Virgo and Scorpio. In the astrology of Vesta in an individual chart, these issues of sexuality and completeness unto oneself predominate. Possible associations are the woman (or man) who chooses not a mate, but as a nun or monk takes on a higher purpose than normal family life, also issues of sexuality and who is ultimately served in the process, self or other. Thus when Vesta is prominent in the chart, there may be issues with purity, singleness and sexuality either by abstinence or by one involving oneself with multiple partners which yet leave the individual untouched by relationship. The placement of Vesta by house and sign also indicate the area of life where these issues may manifest.