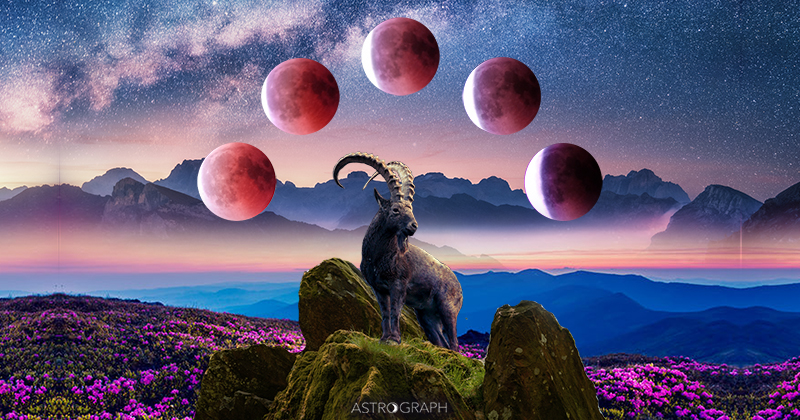 Posted on July 3, 2020 in Configurations |
By Henry Seltzer for ASTROGRAPH Horoscopes

Saturday’s Full Moon, taking place on the late evening of America’s Birthday, July 4th, for the West Coast, at 9:44 PM PDT, which is early morning of the 5th for the East Coast and Europe, is happening during fraught times for this country. This is indicated in the astrology by the continued great emphasis on Pluto, both in the solstice eclipse New Moon, at 0 Cancer, which two weeks ago kicked off the current Soli-Lunar cycle, and in this upcoming Full Moon eclipse configuration. Note that this is a “penumbral” eclipse, in which the Earth’s shadow hits the Moon with only a glancing blow, and will be barely visible as a result. To astrologers however this counts as a lunar eclipse, or an extra-powerful Full Moon. As such, it is of great interest to note that the Moon is found to be in mid-Capricorn, technically conjunct in the sky with transformational Pluto, as strengthened by Jupiter in conjunction, and by the ongoing T-square to Pluto-Jupiter from new planets Eris, in Aries, and Haumea, in Libra, with Pluto and Jupiter at 23 Capricorn. Additionally, we find that Pluto in this Full Moon configuration is highlighted by being closely contra-parallel to the eclipse Sun.

What are we to make of all this Pluto? Well for one thing, the Saturn-Pluto conjunction from the very first lunar eclipse of the 2020 year, which six months ago, on January 10th, coincided with the discovery and naming of the novel coronavirus disease that came to be called Covid-19. When I saw the increased strength of Pluto in this lunation cycle, as evidenced in the recent June 20th solstice eclipse New Moon, along with a tremendous Saturn emphasis, I reckoned that Covid might again be on the rise in this country, which has indeed proven to be the case. Not coincidentally, this Sun-Moon opposition occurs at 13 Cancer-Capricorn, which matches the Sun degree in the chart of the United States, also 13 Cancer. As everybody now knows, the covid outbreak here in this country is by no means in any sort of remission, with many states reporting increased counts of cases and of hospitalizations, threatening to overwhelm amidst the worst outbreaks the available ICU beds.

According to the epidemiologists, the pandemic can in this country be handled at this point only by a concerted effort at social distancing. And this must be by the actions of individuals, so that it is up to all of us. This incidentally makes a huge chime with the potent presence of Eris, Feminine Warrior energy in support of soul intention, with the applicable keyword of taking a strong stand for that in which you most deeply believe. In this, the tricky part is to become as conscious as possible of what your core beliefs actually are, and then proceed to go ahead and act upon these, and these alone. Without that dedication to higher purpose, outrageous acts are more than possible under this influence, as we have been seeing on the American scene, from the top to the bottom of the society.

For every individual, then, as we look to the heavens for guidance, we may discover the spiritual mandate that we grow, as persons, into the very best and most authentic version of ourselves that we can muster. And that is the message of strong Pluto, and as well of strong Eris, in her close square with Pluto, and especially in the aftermath of the Uranus-Pluto square alignment that we have seen also reflected in the astrology over this past decade. This alignment, too, is coming to a head, as noted astrologer Rick Tarnas has proclaimed, both in his classic Cosmos and Psyche, and in a recent currently explanatory video that he has released, “What’s Happening in the Stars Right Now.” You can watch this very inspiring and informative video by clicking here. The ultimate message of all these outer planet influences might be summed up as appreciating the magic of the present moment, the absolute sacredness of what we have before us in these climactic, dangerous, and yet spiritually beautiful times.

The Sabian Symbols for this Full Moon eclipse have also something to share. They are, for the Sun at 13 + degrees of Cancer, the 14th degree, “A very old man facing a vast dark space to the northeast.” This reminds us of the “uncarved block” of Buddhist thought, the creative void. Marc Edmund Jones references, “an absoluteness of self, as a completeness of expectation.” Further, noted 20th century astrologer Dane Rudhyar, speaking to the directional symbolism in this iconic image, says that, “In occult terminology, the northeast is the direction from which spiritual-cosmic forces enter the earth-sphere… the Wise Old Man faces the Changeless Reality, the true North – which (due to the tilt of the earth’s axis) for us is located in a northeast direction.” For the Moon, in the same degree of Capricorn, we find, “An ancient bas-relief carved in granite,” a fitting match to the Cancer degree described above. Jones references “the immeasurable potentiality of the present moment as a recurring manifestation of all that has ever been, or that ever can be.” Indeed, we are reminded of the iconic statement of William Blake, himself possessed of strong Eris in tight combination with a close Uranus-Pluto square, who was able to state his conviction in absolute terms that “Everything that lives, is Holy.” 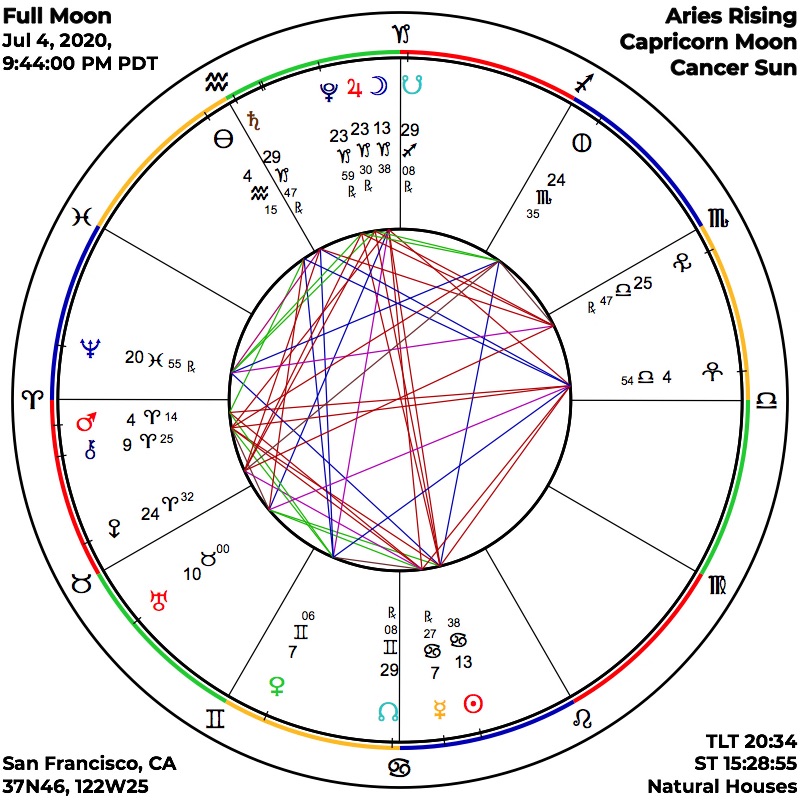