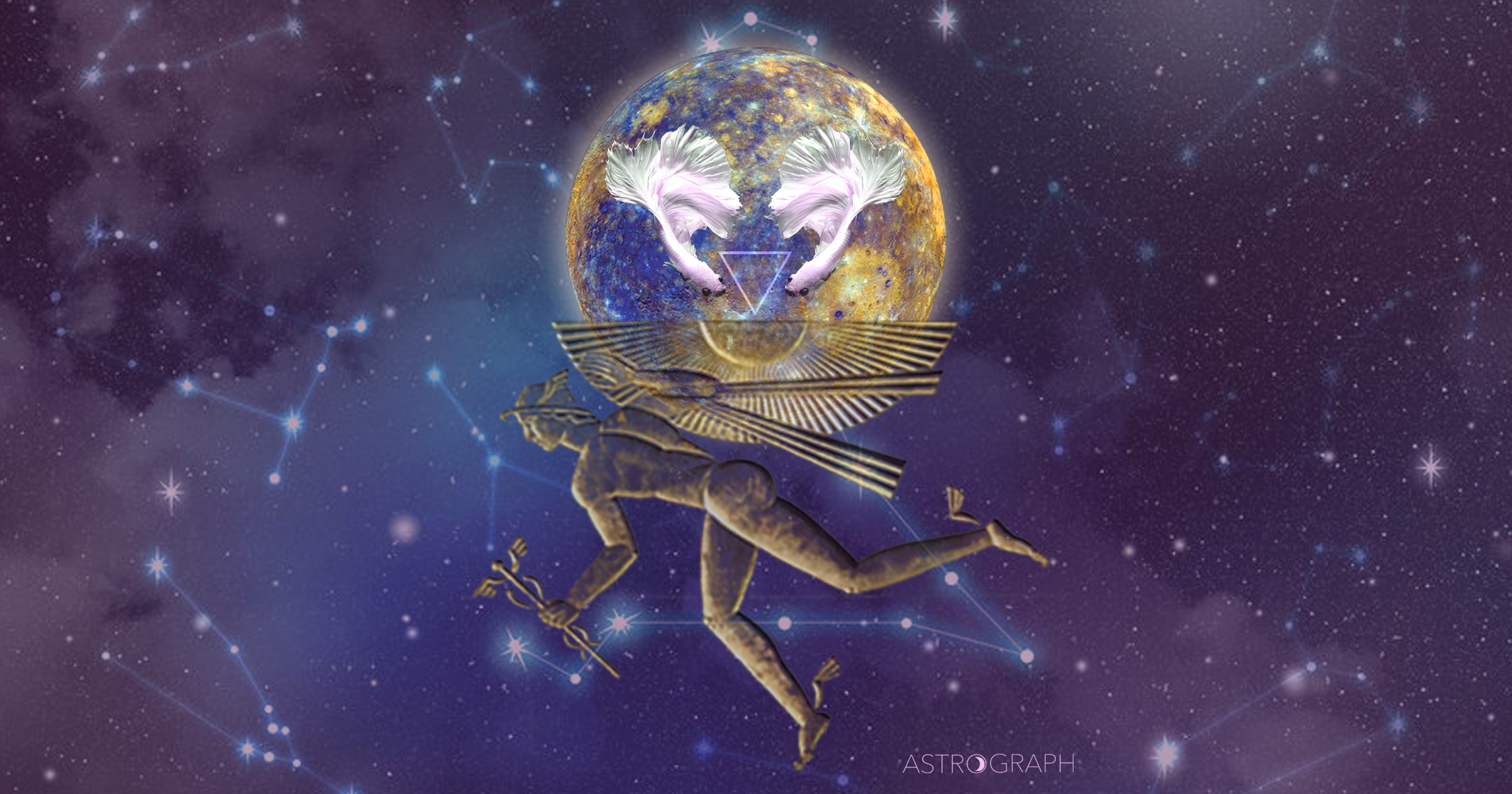 Posted on March 6, 2019 in Announcements |
By Leslie Benson for ASTROGRAPH Horoscopes

From March 5th to 28th, 2019 Mercury will be retrograde through the sign of Pisces, and will escape its shadow period on April 16th. This Mercury Retrograde takes place in quite a mystical mode, considering both its sojourn entirely within the sign of Pisces, and its conjunction with Neptune at the time of its station to direct motion on March 28th. Interestingly, Mercury was also precisely conjunct Neptune in the timing of the recent Virgo Full Moon from the middle of last month, when just entering its pre-retrograde shadow. With Neptune so involved, we can expect his numinous, otherworldly presence to suffuse the introspective musings of this rather fraught March month.

Mercury Retrograde happens about three times per year for three to four weeks each time, and is an astrological phenomenon that has become notorious for missed connections, miscommunications, malfunctioning electronics, travel snafus, fender benders, etc. Among these seeming drawbacks and headache-inducing circumstances, however, Mercury Retrograde periods are also a time when greater awareness and mindfulness can be employed to connect with a more esoteric level of information, uncovering rich potentials for reflection, renewing, slowing down, and resting in meditative silence in order to attune to inner realities. Such themes are encouraged now, during this RE-trograde period, along with anything beginning with 're.' Re-organize, reflect, relax, re-communicate, re-prioritize, rewind, etc. It is a time when it is highly beneficial to pause and take stock of the tremendous growth and evolution that has been happening within and around each of us. It is generally not a good time to start a brand new project, make impulsive purchases, or sign a new contract. The astrological thinking is that the matter will dramatically alter once Mercury turns direct, or even longer: perhaps only after escaping its shadow.

The Neptunian flavor of this retrograde is indicated above. Furthermore, when Mercury stations retrograde at 29º Pisces, we find the little messenger of the Gods in conjunction with Chiron, the Wounded Healer, himself at 0º Aries, and additionally also in aspect to the trickster energy of Uranus. Because Mercury represents our mental landscapes and attitudes, as well as our communication, we may find more of our attention turned toward that within ourselves, and within the world, that is wounded and therefore on the healing journey. It is interesting, as well, that Mercury stations at the very last degree of the zodiac. The emphasis on this final degree could be seen as a harbinger of true retrospective – encouraging that you take ample space and time to pause and look back at your path. What really speaks to you? What do you notice? You benefit when you allow this retrograde time to be a process of gleaning and harvesting that which you are meant to move forward with, along with purging or shedding that which is no longer aligned or necessary for you.

Neptune, and the sign of his rulership, Pisces, represents the archetype of transcendence and divine connection, as well as of escapism and seeing through rose colored lenses, and this is not Mercury’s favorite place to operate. This factor makes this retrograde period an opportunity to get curious, ask questions, do some wondering and wandering, also journaling, and even to allow your imagination to meander into fantasy – so long as at the end of the day such explorative fantasy is truly supportive of your happiness, creativity and purpose. There could be a tendency, now, for trains of thought to easily become hijacked by fear, wasting precious energy and life force, so it may be wise to take the seat of the observer, watching with compassion and kindness as all these different types of thoughts roll along. Know that many things are shifting and rearranging themselves in your life and world, and that there is an arc to that process. This is a special time, perhaps the perfect time to trust in the deliverance of wisdom much vaster than yourself. As our world changes in exponential leaps and bounds, it is challenging each of us to relinquish our attachments and expectations, instead aligning and surrendering ourselves to Source, the Divine, or whatever you might wish to name it. In this powerful and turbulent time, may we each remember and reclaim our own unique expression of divine grace.

March 5 – Mercury Stations Retrograde at 29º Pisces conjunct Chiron at 1º Aries: Mercury is also semi-sextile with the Trickster, Uranus, bringing surprises and sudden enlightenment. Themes are looking back; imagining forward; offering awareness, love and acceptance to the parts of self that are in pain.

March 14 – Retrograde Mercury perfectly conjunct (called cazimi) the Sun: Minds Blossom. Allow the light of your awareness to drift to where it feels good and fruitful.

March 15 – Retrograde Mercury in perfect square to Jupiter in Sagittarius: A parting of the clouds; finding resilience and optimism in the face of challenge.

March 24 – The initial perfection of retrograde Mercury conjunct to Neptune: The beauty and terror of the Great Mystery; following your inner compass; allow the mind to rest; surrender to the process. These maxims apply to the entire timeframe of Mercury’s station, right through to April 2nd, once Mercury has straightened out and gotten past Neptune for the third and final time.

March 28 – Mercury Stations Direct at 16º Pisces: Pause; rest; harvest the lessons of this time. Know that you can’t push the river.