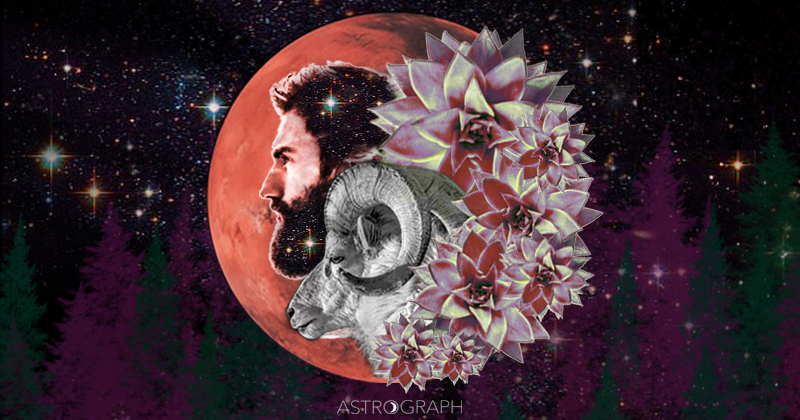 Posted on September 14, 2020 in Announcements |
By Leslie Benson for ASTROGRAPH Horoscopes

From September 9th until November 13th Mars will be on a retrograde journey through his home sign from 28° to 15° of Aries. During this time we can expect to see all of Mars’ themes come to the fore in a thoughtful and introspective manner as we adjust our assertiveness. Mars represents our will power, ability to take action, raw wildness, and inner masculine life force, and we will be examining these factors from the inside out. Mars’ energetic signature has a hot, sharp and piercing quality to it. This energy as we experience and embody it can be utilized in multitude of ways, and when it’s expressed in a helpful way it can lend us focus to take action, to cut away that which is not essential. Conversely it can also lend itself towards violence and aggression causing unhelpful divisiveness or separation. When Mars is retrograde we may experience a heightened awareness around our own relationship to our inner warrior nature, how we handle conflict, and – in a best case scenario – opportunity to find new and empowered ways of aligning our will and actions with our own sense of purpose and higher good in the world. (To learn more about your own Mars signature in your birth chart you can read this article.)

There are two strong aspects with retrograde Mars in the remaining months of 2020 that deserve attention. The first of these is non-traditional, in that a new planetary energy is involved. Mars stationed – on the ninth – quite close to Eris, currently located at the 24-degree mark of Aries, thus a mere four degrees away, just as Eris was in tight square with Saturn-Pluto, their midpoint being 24 degrees of Capricorn. This factor is greatly enhancing both the Mars component and also the Eris square to these two powerhouse planets that in combination represent massive structural transformation. It is interesting to note that when, on his way to the current month’s retrograde station, Mars precisely conjuncted this Eris position on August 17th, fires broke out all over Northern California. There were additional fires that took place during the few days surrounding the actual retrograde station of Mars, as well, with smoke blotting out the sunrise in the San Francisco Bay area on September 9th itself. Mars of course rules Aries and the Fire element. Retrograde Mars will contact Eris once again during the first weekend in October, when Pluto also stations to direct motion.

Another powerful aspect, one of the most pronounced effects of Mars in combination with outer planets, is the square aspect that happens the rest of the year between Mars and Saturn. Normally when Mars makes an aspect to a slower moving planet it lasts a few days and then is finished, but because of the retrograde, as well as Saturn’s motion slowing, to station direct on September 28th, the aspect lasts longer. These two make several exact squares to each other, the second one of these on September 28th itself, and the final one passing more quickly in January. The tension created by Saturn and Mars retrograde in square, especially this end of September, when Saturn is also stationing, is indeed a formidable aspect. Where Mars wants to go rogue in its own way, Saturn says “no, let’s slow down and be very calculated in our dealings; let’s preserve what we already have.” This configuration may be thought to act upon us as the hard hammer does on the hot iron, forging our very being into a new shape. As the evolutionary forces urge us on, we are thus entering into a distinctly new stage in our collective and personal transformation. To add another layer of meaning to this, we can consider that both of these planets are in their sign of rulership – Mars in Aries and Saturn in Capricorn – so that both have tons of strength in their influence. Yet because Saturn is just turning direct, the Lord of Contraction may have a slight upper hand. This end of September experience may translate to feeling pinned up against the wall by limitations of all sorts, yet we are simultaneously being called upon to find centering in our inner flame and the fortitude to keep forging ahead. Labor and effort will be required, and so will deep rest and reservation of where we spend our energy.

Another notable consideration for this Mars retrograde time is the movement of the Moon’s lunations in October. The Full Moon of October 1st is in Aries, as Mars begins to conjunct Eris, and will be conjunct Mars the next day. Two weeks later on October 16, we find the New Moon in Libra in a very close opposition to Mars and Eris, and square to Saturn-Pluto, creating an enhanced T-square configuration. During these weeks we will likely see the collective emotional and interpersonal climate become even more inflamed, and we will have the opportunity to cultivate, hone, and exercise our relational skills and intelligence in the face of conflict. It may be all too tempting to become reactionary or retaliatory when we are triggered by interpersonal stresses or societal madness, but it may serve us well to remember to pause, take a breath, and invest our energy and emotions wisely in our discourse. The dramatic end of September, quite difficult in this way, will thus extend to mid-October.

To throw another monkey wrench in the works, Mercury will be retrograde from October 13th until November 3rd, creating challenges in communication, but also more access to inner reflection around our beliefs and how we conduct ourselves with one another. In the final dramatic conclusion of this Mars Retrograde, when he stations to direct motion on November 13th, there is an opposition from Mars to Venus in Libra. This could manifest as even further polarization cropping up in the collective, as these two planetary positions simply could not be in more stark contrast to one another. Mars in Aries is roughneck, warring, and callous while Venus is harmonious, delicate, and peaceful. I find it important to note that even as we witness these energies playing out on the world stage, we each have these kinds of polarizations that live within us. Perhaps it is when we address these types of inner conflict within our own selves, and treat with loving kindness our disparate parts, we can begin to subdue them manifesting in our external collective reality as the same patterns of dis-ease that perpetuate unnecessary suffering. In short: can we embrace the many contrasted facets of ourselves as a radical act of love and healing that extends itself outward to the whole human race?

Another way to positively channel all of these energies, is to utilize the no-nonsense approach of Mars with Saturn to focus on who and what we want to be in relationship, as we show up for each other. We must examine how we want to do that, and perhaps then just allow the rest to fall away organically. This is to form a space to be with ourselves, and each other, in ways that are clear within our boundaries, yet loving of our differences. To embrace the inevitable polarity as a both-ness, rather than one or the other. To accept the paradoxical nature of what it is to be a human in this time and place. To find a truth that resides in our own divine force of nature, and ask and intend for our free will to flow from that. To make a positive impact in our lives and for future generations. It’s time to take a long, hard look at what that truth is for each of us, and keep current with how that continues to morph, just as our world so rapidly changes before our very eyes.

In these times of tremendous change and upheaval, may we each discover the Essential Truth of our purpose and find the strength and wisdom to express that essence with volition, clarity, and kindness.

Buy Now for $55.00 Download Demo Learn More
Dates given for astrological events are based on U.S. Pacific Time. Add or subtract hours as appropriate for your actual time zone; for example, East Coast, add 3 hours; Western Europe add 8 or 9.