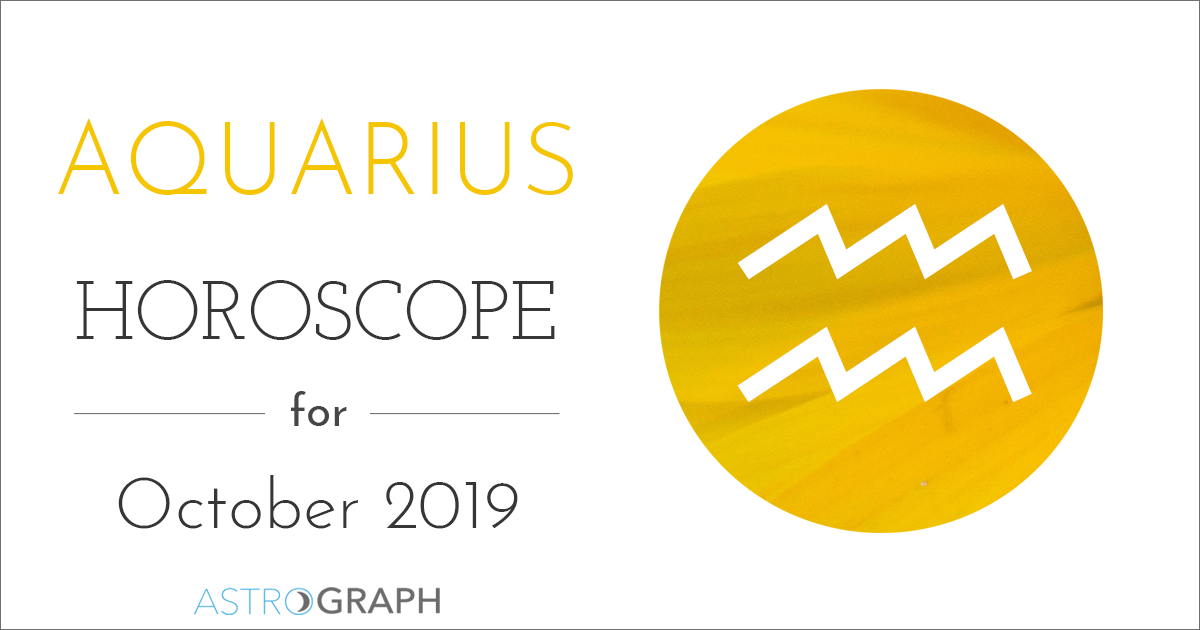 Posted on September 30, 2019 in Aquarius |
By Henry Seltzer and Adam Elenbaas for ASTROGRAPH Horoscopes

This is yet another exciting and climactic month for you, Aquarius. You have been working all year for better understanding of your inner world, so different from your normal waking mode of consciousness. This month brings to a level of completion one segment of the profound arc of this internal developmental saga. Your worldview and sense of Higher Mind within is a vitally important piece of this turning, and is a huge focus now, ever since the Libra New Moon of the last weekend of the previous month. These meditations and incipient revelations are also tied to your future plans in important ways. Like the sculptor excavating the uncarved block of stone, you are in the process of eliminating everything from your pathway forward that does not correspond to your deepest and most sincere values. it is also important now that you work through barriers to communication. By articulating your inner meditations to others, you refine these, and thus bring them ever closer to the reality of their expression in the world of deeds and action.

The month begins right on the heels of a New Moon in Libra in your ninth house of faith, the higher mind, and long journeys (from September 28th). What is important to also consider is that Uranus in Taurus, in your fourth house, is once again elevated in its effects, because closely aspected by the Sun and Moon, so that you will have as one important focus your home and family life. Inner psychological matters will also be greatly emphasized in the month ahead, during the entire thirty-day lunation cycle of this New Moon. You may also experience strange or disruptive occurrences with regard to your evolving worldview.

In the month to come, you will also receive a series of planetary aspects from planets in Libra to planets in Capricorn in your twelfth house of self-undoing, surrender, and dissolution. The sequence begins on October 5th to the 7th, when the Sun in Libra in your ninth house squares Saturn in Capricorn in your twelfth house, followed by the Sun in Libra squaring Pluto in Capricorn between October 13th and 14th. Throughout each of these transits, the same core themes and topics are recurring: greater awareness of faith and doubt, self-sabotage vs. self-healing, long journeys and foreign or strange places, loneliness and learning. You might also experience mystical states of consciousness and solitude, religious or spiritual impulses and the need for a healthier moral or spiritual sense of purpose or direction. You may also notice that themes of justice, fairness, balance, and harmony in your relationships are quite pronounced.

The other major series of transits this month come from planets in Scorpio in your tenth house of career opposing Uranus in Taurus in your fourth house of home and family, starting with Mercury’s opposition to Uranus on October 5th to the 7th, followed by Venus’ opposition to Uranus between October 11th and 13th. You might experiences changes in your career choices taking off in unexpected directions during this time. At the same time, because each transit this month is opposing Uranus in your fourth house of home and family, you can expect that the changes at work will be in a direct dialogue with a revolution that is taking place right now at the roots. Whether these changes are in relation to your parents, family or extended family members, or perhaps in relation to your living environment itself, they will be an integral part of creating the changes you’ll be experiencing this month in the workplace.


A major transit of the month well worth taking note of is the Full Moon in Aries, which lands in your third house of the mind and communication on October 13th. Because the Sun in Libra and the Moon in Aries both form perfect squares to Pluto in your twelfth house of inner work and unconscious process, you will be facing the mystery of existence with a determination to penetrate to its very essence. When you understand yourself more fully in the deeper layers of your psyche, you come into possession of a better basis for understanding the world around you as well.

You may also notice that you are feeling more fiery, aggressive, or assertive around the Full Moon, or you may need to speak your mind more boldly than usual or take a more aggressive approach to something. You may also be presented with a difficult choice or you may have to take an ethical or moral stand of some kind. You should also be watchful that you are being extra careful about your temper and your impulse control; it could be an easy time to say or do something a little recklessly.

Between October 26th and 28th, Mars in Libra squares Saturn in Capricorn, in your twelfth house, giving you another brief dose of recognition of the urge for deep change to take place within you.

On October 27th, the Scorpio New Moon falls in your tenth house of career and profession, opposite Uranus in Taurus. This brings once more the strange, exciting, and potentially disruptive energy of the trickster planet to your conscious awareness, and emphasizes home and family issues. Next month just as much as the previous cycle should feature a lot of awakening and sudden or rapid changes in the way that you do your work in the world.