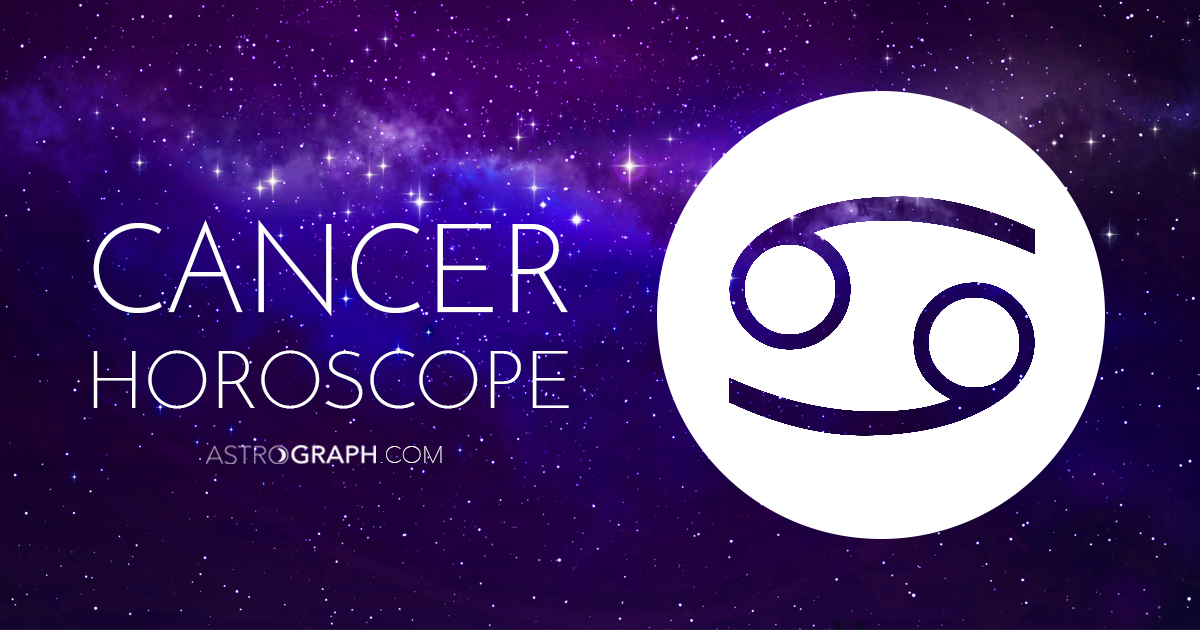 Posted on May 31, 2020 in Cancer |
By Henry Seltzer and Elodie St-Onge-Aubut for ASTROGRAPH Horoscopes

This is a bit of a crazy monthly cycle, Cancer, in this potent eclipse timing that also corresponds to the Cancer season of the year, thus leading you to a powerful reconstruction of your very sense of identity as the month rolls on. You start June with a strong sense of your own inner world, based on the recent and quite potent Gemini New Moon that took place ten days before the month began. You are practically in a dream world of new conceptions, with also a mandate for discernment, a powerful reality urge to separate the wheat of value from the surrounding chaff. You find yourself in the midst of relationship transformation that leads you to new considerations for your work in the world, that it proceed form essentially spiritual grounds. The Solstice eclipse and New Moon of June 20th is particularly cosmic, a powerful new beginning, initiating a novel life phase, one that takes everything you have been experiencing up to this point and in a sense turns it inside out.


Communication planet Mercury is in your sign to begin the month, which has you buzzing with a lot of playful ideas. Your mind is turned on by big dreams and the potential to make a vision reality. Venus retrograde in Gemini conjoins the Sun on June 3rd illuminating hidden longings. Relationships have been on your mind in a way that is hard to define. There is a lyrical quality to the way you are thinking about life these days. Fantasy is coloring your imagination which is excellent fuel for creative projects, brainstorming and projecting a dream into the future. The hard work of the last year is allowing you to access parts of yourself that had remained hidden until now. You are currently in a necessary period of gestation before you start giving new shapes to your exterior world. A lot has changed in the last year, starting with you. More extensively, a lot has changed in your outer world. Priorities have shifted in order to adapt to new realities but the ambitious goals you have for yourself remains. The beginning of the month finds you contemplating what you want, what you value, and where your desires lie.

The Full Moon in Sagittarius taking place on June 5th is the first eclipse on the Sagittarius-Gemini axis since the Nodes of the Moon have changed signs. This penumbral lunar eclipse takes place in mid-Sagittarius, and brings attention to your everyday logistics, your health and more extensively your habits. You might gain some new insights on how your mind influences your well being. It’s a good time to think about ways to implement a more active mindfulness practice. The mind-body relationship is a powerful one and this month you have access to the inner workings of your psyche in a way that is not always visible.

The Last Quarter Moon in Pisces on the late evening of June 12th emphasizes academia, foreign places, or a recent educational journey. You are challenged to rethink or reformulate a goal related to these topics and it could feel like a puzzle with a few lost pieces. Something is missing from the picture rendering decision-making nearly impossible. You might be at a crossroad while still being prompted to make a choice. Don’t fret too much over it as things are not set in stone.

Mercury stations retrograde in Cancer on the late evening of June 17th and will be moving retrograde until July 12th. A significant time period for you since this retrograde is taking place in your sign. Take this opportunity to reevaluate your priorities; a process well underway that will prove valuable in the long run. Your well-being, your body, where you want to be, what you call home, what and who you love is on your mind. If you have an ongoing project you are trying to finish, this retrograde could be just what you need to put the final touches on it.

The Sun enters the sign of Cancer on June 20th signalling the beginning of summer in the Northern Hemisphere. A few hours later a solar eclipse occurs when the Moon enters Cancer and meets with the Sun. This annular solar eclipse is the last one in Cancer from a series that began in July 2018. This solar eclipse is a potent one as it sits at the zero degree point marking the Summer Solstice, and the longest day of the year in the Northern Hemisphere. A cycle comes to a close, and a new one begins in connection with your needs, your vitality, your body, and your sense of identity. You might want to reflect on more extensively putting yourself and your needs ahead of distractions, or perhaps the needs of others. This is of course a never-ending process, but the last two years carried difficult lessons and realizations in connection with these topics. You are now better equipped to make the best possible decisions as you have learned no one else is able to do that for you.

Venus in Gemini stations direct on the late evening of June 24th after being retrograde since May 12th. Clarification and insights that came through in the last month in connection with self-worth will start to feel more tangible. The potential to reconcile the many elements that make a relationship pleasurable seems to be available again after a period of reflection. Your needs and desires will seem less abstract, and you will be able to ask more clearly for what you need.

Mars enters the sign of Aries on June 27th where it will spend the next six months. Mars in Aries will emphasize your career and vocational goals carrying a lot of power to back up your ambitious goals in the second half of the year.

Jupiter and Pluto in Capricorn conjoin for a second time on June 30th. The first conjunction, on April 4th, initiated a new cycle in connection with your partnerships and the way you think about relationships. This second conjunction could bring up issues that need to be addressed before you can move on. Unresolved issues could surface that will need to be addressed. These could have to do with boundaries or responsibilities within a partnership. Mercury in Cancer sextile Uranus in Taurus on the same day; talking things through with a friend or spending time socializing could help you see things more clearly.