Posted on April 11, 2014 in Configurations |
By Henry Seltzer for ASTROGRAPH Horoscopes

Monday night April 14th, around midnight on the West Coast, or later if further east, 3 hours for the EDT time zone and 8 or more for Europe and beyond, there will be a lunar eclipse and Full Moon that will be rather dramatic in both its physical and its astrological manifestations. Physically it will be worth staying up for, since this eclipse will be visible all over North and South America, and in parts of Europe and just at moonrise in Australia and New Zealand. The partial is at 11 PM PDT and the total begins at about 12 AM April 15th, when the Moon grows redder as it enters the Earth's shadow. The time of the exact astrological event is 12:42 AM PDT. The Earth eclipses the Moon, and the Moon is opposite the Sun, making for the dramatic symbolism of an extra-powerful Full Moon.

Since this Full Moon is part of the week leading up to the cardinal cross event of the following weekend, it is also important that the Moon is within 9 degrees of a conjunction with retrograde Mars, while Mars, moving backward through the sign of Libra, is starting to come into its final alignment — by next weekend — opposite Uranus and square to Pluto. At the very time of the eclipse, in another synchronistic connection, Mercury in the sky exactly aligns with Uranus in the 14th degree of Aries. Visually, if you can find Mercury in the sky the next morning, just before sunrise, you will be looking at Uranus as well. This Full Moon configuration is thus a precursor of the powerful alignment for Easter Sunday. Pluto currently occupies the 14th degree of Capricorn, while Jupiter is coming into the 14th degree of Cancer, opposite Pluto, where it will be found by mid-week. With Mercury touching off this closing square we are already into the timing of the cardinal cross, so that the pressure for radical transformation climbs at least a notch or two higher on its way to the perfection of the following Sunday, April 20th.

Astrologers like to talk about the moment of exact, but this Uranus-Pluto cardinal cross configuration is actually close enough for some real effects to be observed in the earthly plane, especially, with the eclipse, as sandwiched between the Sun and Moon for added emphasis. All next week will be dramatic, the less so, perhaps, the more you have been doing your spiritual homework. Radical change is called for and we can resist or just go with it. It is however more painful when you resist.

This Full Moon eclipse configuration is also fascinating in terms of the Major Asteroids. These are feminine archetypes, and are becoming more important in our times, with the return, in more mature form, of the feminism and the civil rights issues of the sixties. It was certainly refreshing in the Democratic presidential primary race of 2008, to find a black man running against a women! Getting back to the current skies, we find that three of the four Feminine Asteroids are strongly implicated in this extra-powerful Full Moon, and they are Ceres, ruling nutrition, found in Libra, which the Moon conjuncts to within a tenth of a degree; Vesta, two degrees away from the Moon and Ceres, ruling solitary feminine achievement; and finally, exactly opposite Vesta, and near the Aries Sun, we find Juno, the consort of Zeus/Jupiter, who was partner-oriented. By contrast, the Vestal Virgins of mythology gave of themselves in a spiritual way, and also kept the hearth fires burning, but were dependent upon no man. All three of these asteroids are completely caught up in this powerful opposition of Sun and Moon, so that there is a message here that feminism in all its forms is definitely on the rise. This is indeed called for in the tenor of the times, when every voice, representing both masculine and feminine energies, the Yin and the Yang of our human condition, must rise to be counted.

The Sabian Symbols for this Full Moon are fascinating. For the Sun, in the 26th degree of Aries, we have: "A man possessed of more gifts than he can hold" for which we substitute "A woman or a man." Marc Edmond Jones assigns the phrase "genuine self-fulfillment" which is one hallmark of what we humans are currently striving for. Meanwhile, for the Moon we find "An eagle and a large white dove, turning into one another" which is an obvious symbol for another phase of our current social and personal activity, and speaks to an approach that is softer, more feminine, and yet still strong. Perhaps it is finally time to let the dominator side of our culture, and of our personalities as well, simply and gracefully fall away. 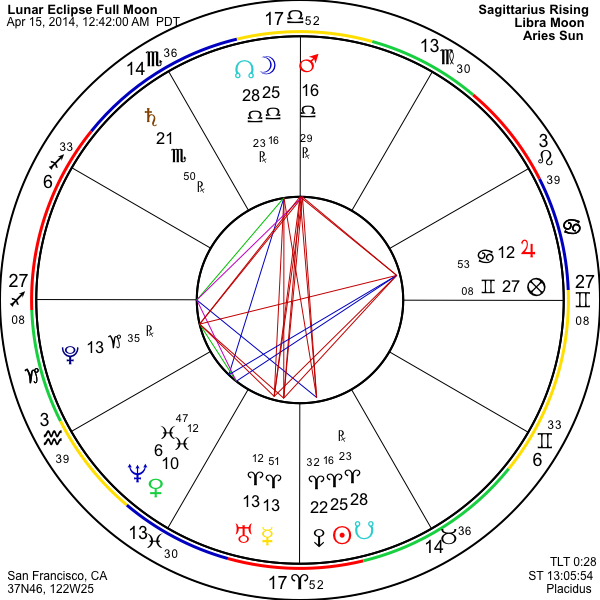 The First Quarter Moon is in Gemini: All day Next Mercury Retrograde
Apr 21 - May 14 Other Announcements
Last updated January 30, 2023