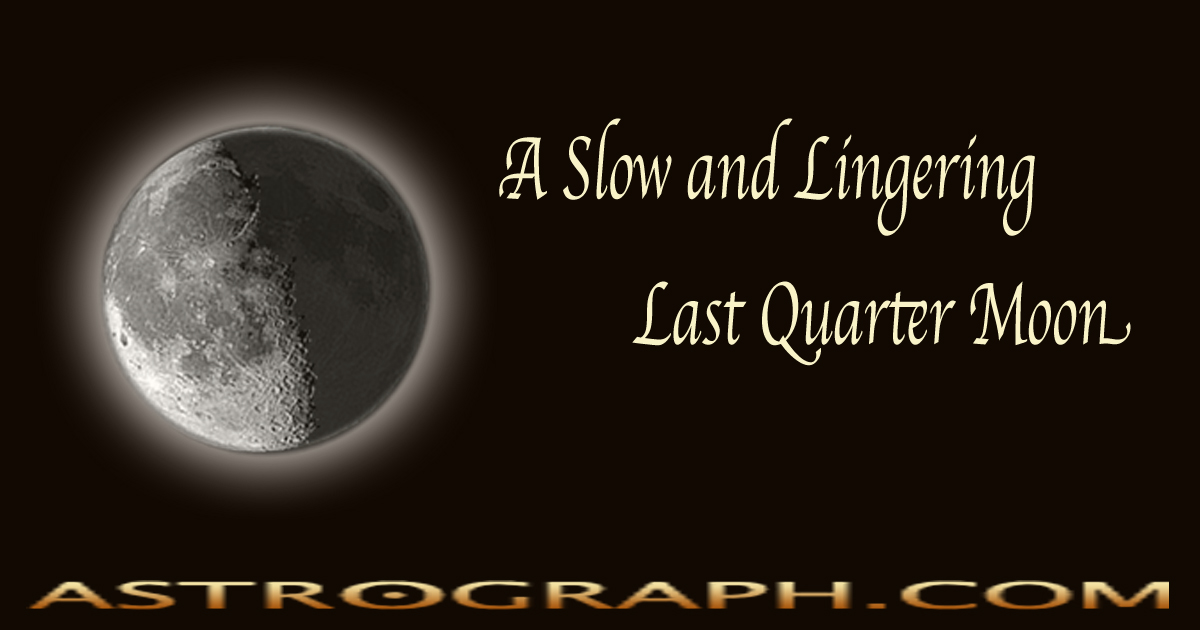 Posted on August 17, 2014 in Configurations |
By Henry Seltzer for ASTROGRAPH Horoscopes

Sunday's Last Quarter Moon brings Mars and Saturn together, an aspect that grows stronger over the week that follows and that signals forward momentum, as symbolized by Mars, coming to crashing halt against the brick wall represented by the limitations and restrictions of Saturn. This phase in any case expresses a time of stopping still in our tracks in order to take a second look at what we are all about. The re-orientation and reevaluation implied by this third quarter is really a chance to adjust ourselves to the more informed viewpoint that the experience of the previous three weeks of the cycle has brought to us. If we seem stopped in our tracks, it is for an adjustment to our thinking. In the constant rush of activity, we cannot stop to consider; we therefore need to slow down in order to really think things through.

With Uranus still inconjunct Saturn, we are also currently meditating on the events of our lives as viewed through the larger lens of the effect we have upon the collective that surrounds us, and the collective's effect upon us. The planetary archetypes of Uranus and Saturn both offer visions for where society might be able to evolve. Although the vision of Saturn is considerably more conservative than that of Uranus, they both are after the perfection of the potential for meaningful and constructive collective involvement. We might contrast this against the idea of the individual working on his or her own. The best representative for this would be Mars, emphasized in the current configuration as well, being aspected by the Moon and by its forming conjunction with Saturn. This lunation thus represents a continuation of a theme that we have been noticing in recent ones, of the individual versus the larger unit of the various social settings that he or she is found to be contained within.

As a part of our ruminations at this time, we might wind up thinking about this distinction. We also might be reviewing the contrast of solitary activity versus idealized relationship connection. Venus is also in the picture of this Last Quarter Moon, being conjunct to Jupiter with the pair of them closely inconjunct to Neptune, just as Mercury comes into opposition with Neptune. The Neptunian vision for idyllic solutions and situations can be expressed as idealization, making everything around us magical and otherworldly, or the dream of escape from the rough and tumble of the here-and-now. We probably need some of each in this fraught era, the chance to escape into fantasy or pleasant daydream and as well the hope for somehow being able to concretely forge a better tomorrow. In the end we must look beyond the image; and beyond the concept of purely individual activity.

The Sabian Symbols for the Sun and Moon in this Last Quarter configuration are useful: For the Sun, in the 25th degree of Leo, we have: "A large camel, crossing the desert," and this immediately brings to mind the long slow progress of society, and of ourselves individually also, slogging along, trying our best to make it through, even though the scene we are traversing is harsh. For the Moon, in the 25th degree of Taurus, we find: "A large, well-kept, public park." This is an obvious symbol for the commons, what we as a society all share in, be it water, energy, Internet, or the air that we breathe. All are currently threatened. Marc Edmund Jones speaks of "a high devotion to the practical welfare of all people collectively." We do well to imagine embodying this ideal, as perhaps best expressed in the Witter Bynner translation of the 13th chapter of the Tao Te Ching: "One who knows his lot to be the lot of all other men is a safe man to guide them; One who recognizes all [humans] as members of his own body is a sound man to guard them." 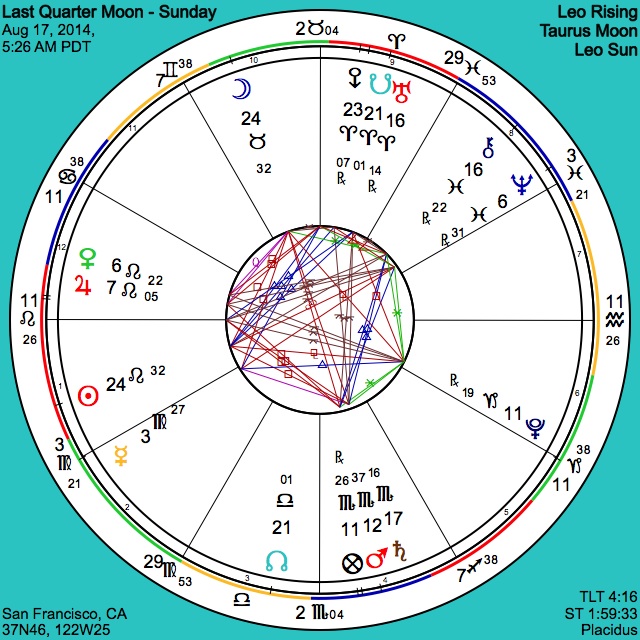