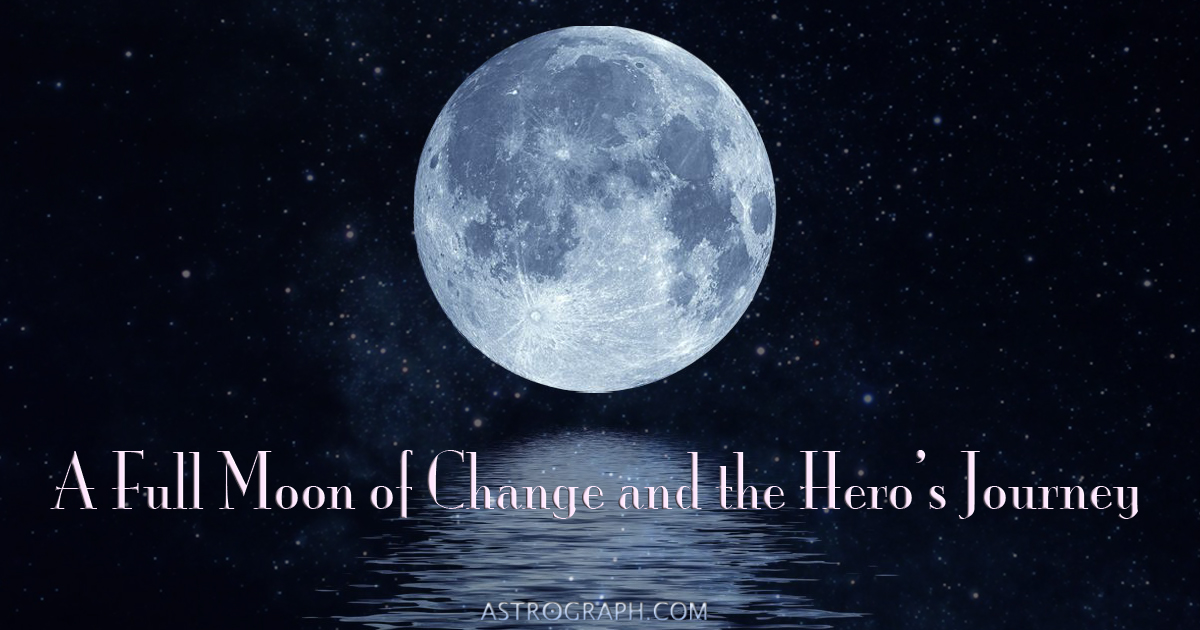 A Full Moon of Change and the Hero’s Journey

Posted on May 12, 2014 in Configurations |
By Henry Seltzer for ASTROGRAPH Horoscopes

This Scorpio Full Moon taking place on Wednesday, May 14th, brings up excitement and contrast, and represents another intense lunation, coming along as it does with a stationing Mars in aspect to freedom-loving Uranus and to relationship-oriented Venus, while the Full Moon itself conjuncts the restricting and limiting nature of Saturn, in close bi-quintile aspect to Uranus. This phase represents the flowering and fulfillment of the cycle that began with the powerful Solar Eclipse New Moon in Taurus from the end of April, and is thus a stage in that unfolding as well. We might want to feel into whatever we can gather from the cosmic currents, as we reap the seeds that we have sown in that late April time frame that also saw the close square of Uranus and Pluto, coming into exact dynamic alignment with each other for the fifth of seven times this decade.

Because Mars is currently already occupying the degree of its May 19th turning point, so that it is standing virtually stock-still in the sky right now, in Libra, and aspecting Venus by opposition and by contra-parallel, and also by mutual reception, we have on our hands a radical re-statement of what it means to be in sole possession of ourselves and of our destiny going forward, versus a life lived in terms of partnership with others. Of course, both of these philosophical positions can be overdone. We all know intuitively that we cannot live out our days in dependence and in complete merger with others, and yet, in some strange way we cannot entirely go it alone, either. Our every act of soul growth must be strictly for ourselves, and by our own inner light, independent of the desires and the claims upon us by the surrounding collective. We must come to our own understanding, in our own way. And yet, that soul growth that we come to must also paradoxically take place in a setting that allows others as well as ourselves to participate in the ultimate scheme of things, living out and expanding upon the world that we have helped to manifest.

The full flowering of this Full Moon might therefore bring light to these issues, although in a radically different way for each one of us. We also find ourselves in the midst of contrast; stodgy Saturn is featured in the configuration of this Full Moon, and remains in close aspect to flighty and individualistic Uranus, which symbolizes freedom from all restraint. This includes the limitation of prior knowledge, what it was that we thought we knew, back when we believed that we knew it. So-called facts are constantly morphing and shifting in this era of ferment. In order to confront the situation and to thrive in the midst of such massive change, we must, as Leonard Cohen so aptly described our position, be "heroes in the seaweed, ... children in the morning, ... leaning out for love..." even as we consolidate our own independent perspective and proceed along the lines of our own individual transformation.

The Sabian Symbols for this Full Moon are once again instructive. They are, for the Sun, in the 24th degree of Taurus: "A mounted Indian, with scalps attached to his belt," in which Marc Edmond Jones finds an association with "an unimpeachable control over life through a discipline of the self and its powers," a very emblem of the Hero archetype, corresponding to that take-no-prisoners attitude that sometimes seems necessary as we face up to the challenges that life offers us. For the Scorpio Moon we find: "Crowds coming down the mountain to listen to one man," for which Jones has "an almost spectacular ability to enlist the higher potentialities of everyone" in response to a practical need. This is another symbol that can be simultaneously be read as hero and as everyman, moving and transforming strictly on our own, and yet somehow in concert with the needs of the surrounding society. 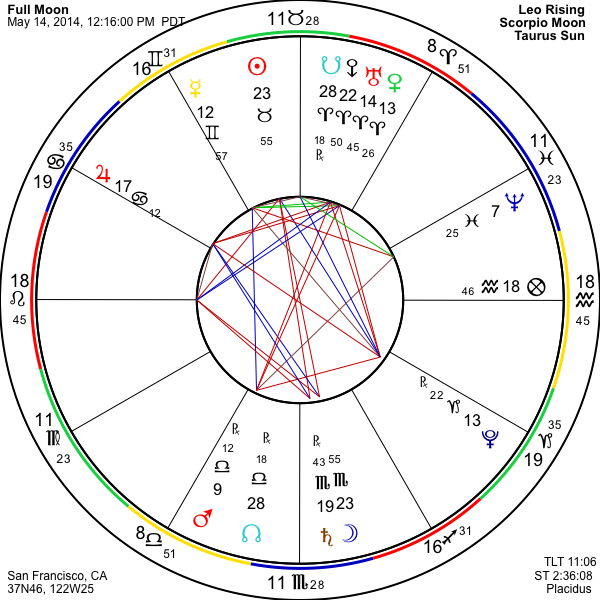