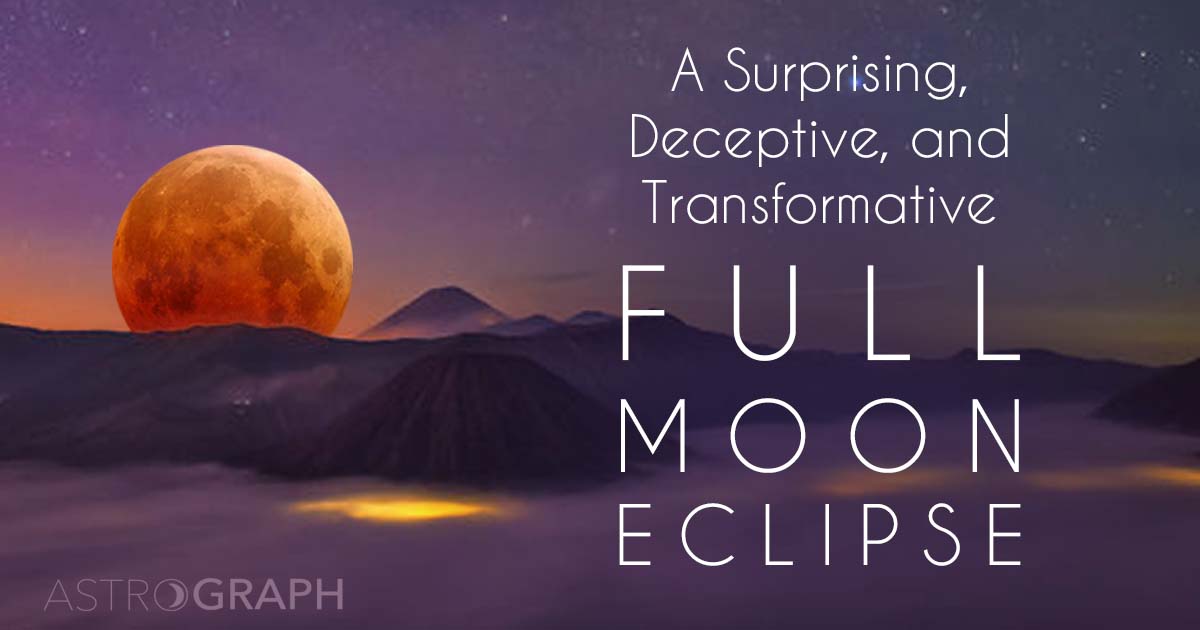 Posted on August 4, 2017 in Configurations |
By Henry Seltzer for ASTROGRAPH Horoscopes

Monday’s Full Moon eclipse is quite a potent lunation, taking place at the mid-point of Fixed signs, and having a connection to each of the outer planets including Saturn. The middle degree of 15 in each of the Fixed signs is in any case considered a power degree. In Monday’s chart, the Moon degree of 15 degrees and 25 minutes of Aquarius is also very nearly the exact midpoint of Neptune and Pluto, in their long-term sextile, forming a yod to the eclipse Sun, in a pattern called “the Kite.” Since, by planetary aspect, both Neptune and Pluto are folded into this Full Moon and lunar eclipse formation, this represents a delicate stage of the massive watershed of alteration already implicit in the Uranus-Pluto square that characterizes this decade. Pluto brings transformation. Neptune, representing that which is beyond the physical, is not fully in sync with the three-dimensional mundane world, resulting in the possibility of illusion and confusion about what is truly happening. There is also a distinct spiritual component to the Neptunian energy, which, like Pluto, also has a transformational side. We are in the midst of major change, on both societal and personal levels, and it is our job to stay as awake as possible through it all. It is interesting to note that the eclipse Moon is also quintile with Uranus in late Aries, while Eris and Saturn remain in their close trine. These additional factors bring the idea of a unique individual perspective to bear, in support of deep soul intention, which is surely the path leading beyond the dilemma of what is in many ways our failing society. It is said about these outer planet experiences, which seem to bring chaos, that it is important not to dwell on the chaos but to await the new birth.

This entire week of the eclipse Full Moon is a dynamic one, when many life factors could irreversibly alter, heading into the weekend of the 12th and the retrograde of Mercury. Jupiter is square to Pluto, so that if we haven’t had enough impulse for change, there is plenty more to go around. Because Neptune is so strongly participating in connection with the Pluto aspects that have already been prominent, we might expect a large component of idealism which then has to be brought down to the real, as Saturn comes into the picture of what is transpiring around us and through us. This can verge on over-optimism, self-deception or even deception on the part of others, or else everything can come out magnificently as a vindication of natural law, and a positive point of view. In this way, even seeming setbacks might come to be regarded as in your own ultimate best interest, so that it is good to keep a level head about things.

With Venus in bi-quintile to the eclipse Moon, and in quintile to Uranus at the approximate midpoint, relationship is up for us and will likely provide some surprises, or unexpected rearrangements. Existing partnerships might discover that something quite new is emerging within their connection with each other, and this can obviously be a good thing, resolving the built-up tension of stuck positions. As Mercury slows down, preparing to retrograde, Venus applies to a sextile with Mercury, and to a semi-sextile with Mars in Leo. There is likely to be a great deal of introspection regarding interpersonal bonds, as well as a modicum of vagueness and confusion, as alluded to above, for the remainder of this second rather intense week of August.

The Sabian Symbols for this Full Moon eclipse are interesting and, on the whole, positive. For the Moon, in the 16th degree of Aquarius (counting from the first degree which is 0) we find “A big-business man at his desk.” This might remind us of the current political situation in Washington, but, beyond that, it carries a figurative meaning relating to the developmental arc of every individual. Marc Edmund Jones has “personal stability through organizational powers… personality is developed as it is challenged to prove itself.” For the Moon, in the same degree of Aquarius, we have the hopeful symbol of “Sunshine breaking through after a storm.” Jones references “personal stability through [one’s] recuperative powers, emphasized in terms of … inner organization.” Indeed, it is the inner that supports and complements the outer, so that in times of the gravest difficulty we have always that fulfilling reserve to fall back on, to ease our stress and strain, and to enable us to take the most positive and life-affirming view of our situation, namely the highly intuitive power of our own internal resources. 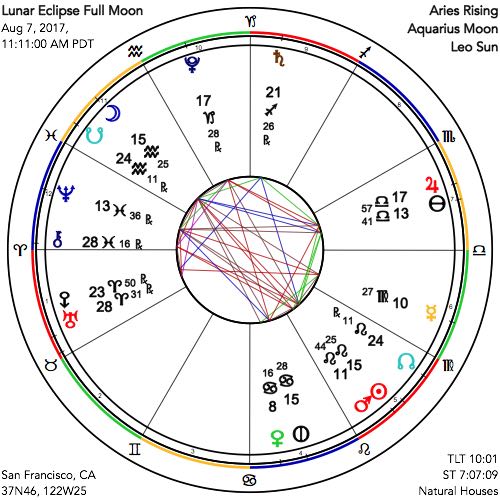