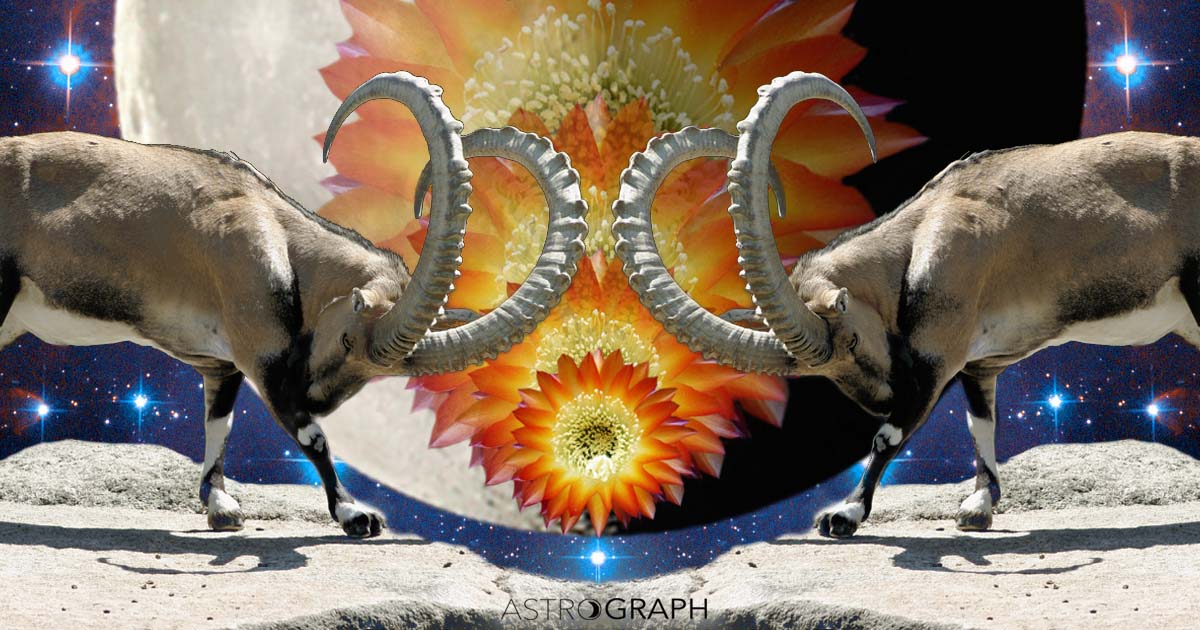 Posted on July 3, 2018 in Configurations |
By Henry Seltzer for ASTROGRAPH Horoscopes

Friday’s Last Quarter Moon takes place at nearly 1 AM, July 6th, on the West Coast, and later for points east. In any case this is quite a dynamic quarter moon, featuring a major trine configuration as well as multiple square alignments; and this includes, of course, that between the Sun in mid-Cancer and the Moon in Aries. Jupiter and Neptune form a lovely trine in Water signs, brought into further prominence by the Cancer Sun in close trine with both. This grand trine in Water features Neptune in his own sign of Pisces, which is tricky because the essential nature of this numinous planetary archetype is orthogonal to the horizontal world of ordinary happenings and financial business. In standing outside of common events and run-of-the-mill activities, Neptune is famously “not at home” in the physical world of the senses. This can lead on the one hand to spiritual realizations beyond egoic posturing, lending an aura of mystery and profound enlightenment, yet also to mistaken judgments, idealization, and flights of fantasy. Trickster Uranus also aligns with Neptune, being semi-square, while the Sun is quintile Uranus to within a tenth of a degree. Jupiter of course is fine with all of the above – bring it on! he says – and promotes an attitude of joyful mirth to whichever way these outer planet archetypes manage to play themselves out in each of our individual lives. Meanwhile, the Moon in Aries highlights the presence there of both Chiron, the Wounded Healer, and Eris, a Feminine Warrior energy that is, at her worst, disruptive to no apparent purpose, and at her best lining up in support of true soul intention, disruptive though it might be. These planetary energies are also featured now, because Jupiter aspects their midpoint by less than ¼ of a degree, while Moon resides within a degree of it with the Sun in square. All of the above illustrate that this is a complex and confrontational configuration, taking place in a complex time in the history of our evolving culture. Each of us, in our individual lives, is closely and thornily engaged, as we attempt to understand where our errant society is headed and how to plug ourselves in, and as we struggle with the torrent of revelations coming down.

And, indeed, we are seeing the best and the worst of what the American government and its population can manage. On the one hand there was recently the treatment of immigrant families, with in most cases the parents being lied to about where their children were headed as they were separated from them upon being taken into custody. Over 2,000 children still remain to somehow be reunited with their families, as has now been mandated by the courts. This practice, intended as a cruel deterrent, and redolent of authoritarian dictatorships going back to Nazi Germany, is being universally condemned by other democratic countries around the world and by the vast majority of US citizens, who have been demonstrating in increasing numbers all over the country. A new species of activism is rising up to call for a change to this policy, and to protest other signs of public disenfranchisement, as seen by the determination of conservative members of the US congress to force the seating of a right-wing judicial appointment, going against their own stated guidelines for an election year, and pledged to reverse Roe v. Wade, and a woman’s right to choose, in defiance of the preferences of 67% of the American populace. The prominence of both Uranus and of Saturn in the current skies indicates that the polarization that we have seen in the last twelve months or more is, rather than calming down, increasing. Saturn and Pluto remain in parallel to each other, with the Sun and Moon making a wide T-square to Pluto, and with this latter symbol for major life transformation about to be strongly highlighted in the upcoming extremely potent Solar Eclipse, a week away, at 20 plus degrees of Cancer. Their combination indicates major structural change, and traditionally also symbolizes “conservative empowerment,” as was evident in September 2001, when Saturn and Pluto opposed each other across the Ascendant and Descendant axis of the US chart for July 4th, 1776.

Retrograde Mars, also highlighted, being contra-parallel to the Sun and opposite Mercury while remaining in parallel with Saturn, brings greater consciousness to everything that we are observing, as we seek to better understand the hidden motivations of ourselves and others during a crucial summer. We might be able – through a process of meditative introspection – to learn where it is that we really stand on the issues of the day, and where we need to put our money and our deeds on the line; this in order to be in alignment with where our deepest values lie, and to be able to act in accordance with our most profound inner convictions.

The Sabian Symbols for this First Quarter Moon form, as usual, an interesting counter-point to the current astrological currents. They are, for the Sun, in the fifteenth degree of Cancer, “A group of people who have overeaten and enjoyed it.” If we make this into a metaphor for life, we might imagine that the enormous banquet hall referenced in some renditions of this symbol could be Nature itself, in which case we can see this as a symbol of the unending enjoyment of the natural world as a source of spiritual sustenance. Marc Edmund Jones, who fostered the creation of these symbols, refers to, “the inescapable richness of life in any normal manifestation of itself… an effective and smooth demonstration of human competence.” We might also hear in this a reminder of the dangers of human greed, and a warning against excess. For the Moon, in the same degree of Aries, we find, “A Native American weaving a blanket,” which reminds us again of the natural world, which indigenous peoples have always remained close to. The weave of the blanket might even suggest a ceremonial act, echoing the various strands of human experience that make up a community, tribe, or nation. Jones has, “excellence of self-expression” and “the individual’s gift for preserving or enhancing … the culture in which he finds himself.” Indeed, we must at all costs continue to represent our values as we struggle to unite around common goals, rising to the occasion and to the implicit challenge of these fractious times, and seek to preserve or memorialize the very best that we can find within us and as a society. 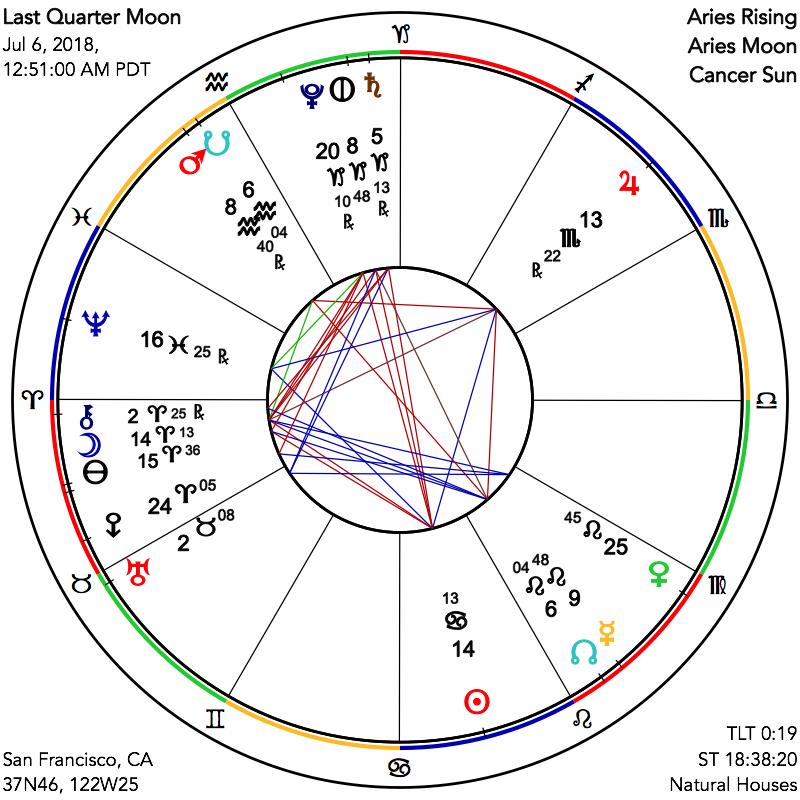