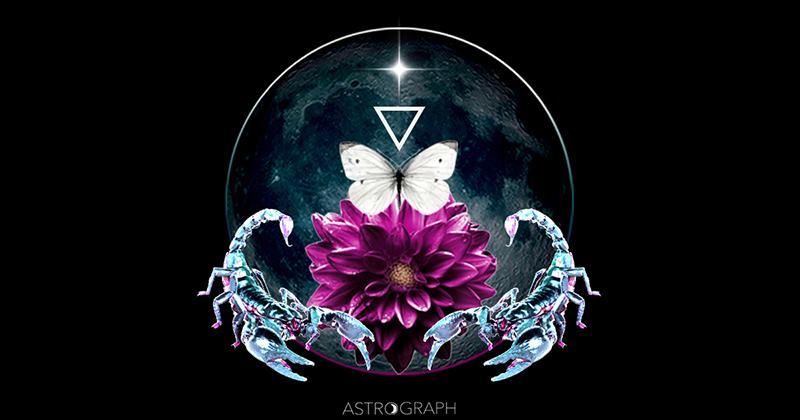 A New Moon of Epic Proportions

Posted on November 12, 2020 in Configurations |
By Henry Seltzer for ASTROGRAPH Horoscopes

This weekend’s New Moon in Scorpio, taking place on November 14-15, late Saturday evening on the west coast, early morning Sunday for the east coast and Europe, is a rather remarkable lunation. The triple conjunction of Saturn, Jupiter, and Pluto is reaching its peak, now that Jupiter has moved forward to lie between the other two, in a culmination of the Saturn-Pluto combination that has been active all year, beginning January 10th, and that has signaled a societal transformation that was being discussed by astrologers several years back, when the November timeframe was singled out. As a side note it is somewhat ludicrous that disparaging remarks have flown around regarding the fact that astrologers did not predict the Covid pandemic, when in fact they predicted a huge societal reset this year, because of Saturn-Pluto, and Saturn-Jupiter-Pluto in this very month. Now, here we are.

To summarize what is going on at the societal level, the pandemic is currently raging out of control, especially in this country with its lack of coordination from the outgoing administration concerning preventative measures, while further disruption between the American political parties is immanent, setting a contentious tone for the remainder of November in the aftermath of a hotly contested election season. The divide between the two parties seems to be more bitter than ever, as they each attempt to discern what it is that they need to do in order to be able to work together, for the good of the entire nation, moving forward.

Additional factors that are present in this New Moon serve to further exacerbate this crescendo of Saturn-Jupiter-Pluto. The New Moon degree of 23 + Scorpio makes, once again with this series of New Moons, a close aspect to Pluto at 22 + Capricorn, in this case a sextile. Another T-square to Saturn-Jupiter-Pluto is in fact also present in this New Moon, quite exact to Jupiter-Pluto, from Eris at 23 + of Aries, opposite Venus at 22 + degrees of Libra. This is dramatic, and enhances the significance of this potent arrangement of outer planet energies. The structural transformation thus implied is coming down on all of our heads, affecting us both collectively and individually.

It is quite interesting to note, as well, that Mercury, returned now to Scorpio, its retrograde motion having finished earlier in the month, is approaching an opposition with Uranus in Taurus, bringing further surprises. Meanwhile, in this configuration also, Haumea remains in partile square to Saturn. Haumea is another new KBO planet, officially named along with Eris in the 2006-2008 timeframe, and represents profound connection to Nature, including concepts of Natural Law, or finding the motivation inside yourself for taking the moral path. This refers to finding within your Higher Self the “right” thing to do – wise action, right relationship, and those spiritually viable principles that go beyond purely egoic responses to situations.

As far as Eris goes, as Feminine Warrior for soul intention, and as a fundamental part of this ongoing T-square, this archetype implies that we have the mandate now to pay attention to our deepest principles, and to courageously act upon them in all that we do. With Haumea in the mix, we must do this in accordance with Natural Law, arising within us, as we can manage to discern it. As these energies come to a head over the closing months of the 2020 year, this astrological symbolism will take us far. Rather than bemoaning our difficulties, the astrology urges us to rise above these in a way that builds character, and that instead of leaving us helpless, empowers us. In terms of the biggest possible picture, as prominent Jupiter signifies, we must in the long-term look to our sacred evolving selves.

In this we are enjoined to emulate the lowly caterpillar, that surrenders itself to the ultimate dissolve, into its own primordial goo, until getting itself together in new ways begins its days of ethereal flight. We must let go of all that hinders us in this sacred development, referencing our true mission here, that which we came into this lifetime to perform, and which will take us forward in our spiritual evolution even beyond it.

The Sabian Symbol for this New Moon may provide an additional perspective. For the Sun and Moon at the 24th degree of Scorpio, or 23 +, we find, “Crowds coming down the mountain to listen to one man.” This veiled reference to the Christ image, on a symbolic level can be seen as listening to the still small voice of Spirit that arises from deep within ourselves. Marc Edmund Jones makes reference to, “the supremacy of spiritual over other more tangible forms of authority among us,” and goes on to state that “any higher realization must be brought to earth for… its ultimate sharing among the many.” For all of our sakes, as we move forward through the divisive waters of this end-of-year timing, may it be so. 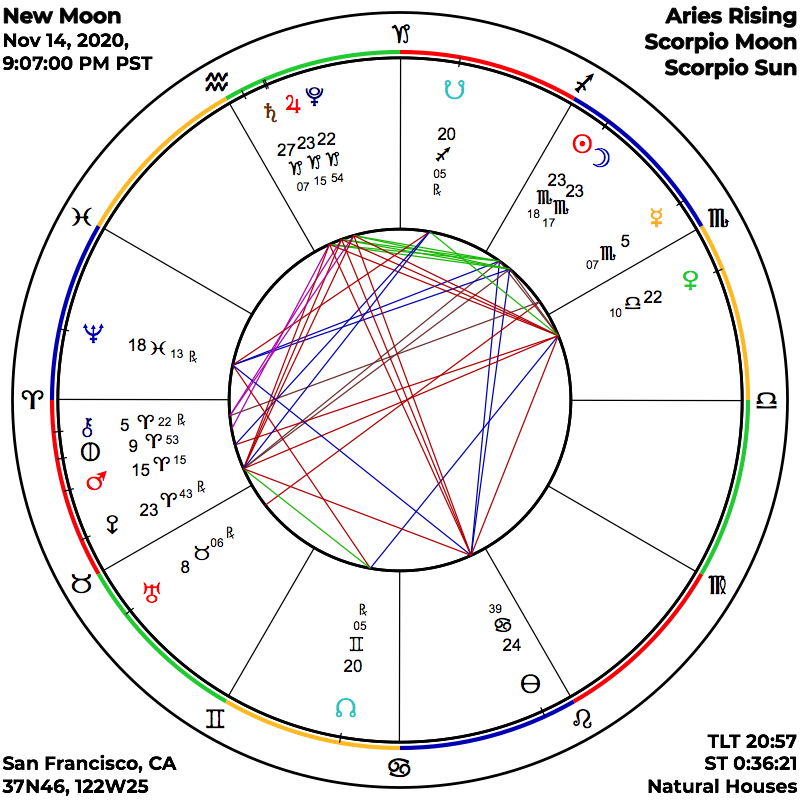