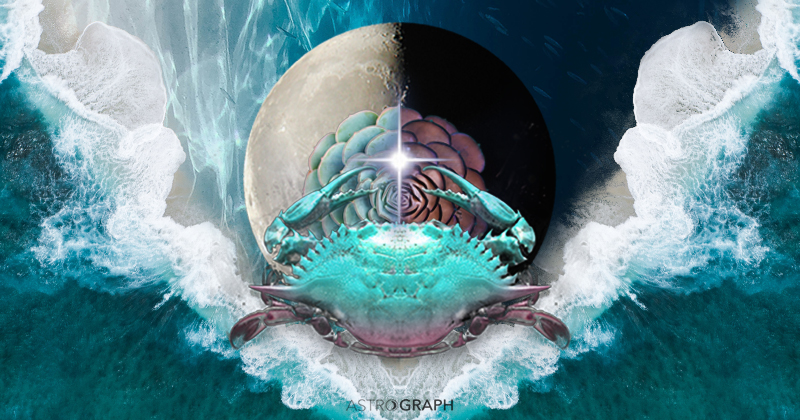 A Last Quarter of Misinformation and Spiritual Opportunity

Posted on October 8, 2020 in Configurations |
By Henry Seltzer for ASTROGRAPH Horoscopes

This Friday’s late afternoon Last Quarter Moon at 17 + degrees of Cancer – taking place early morning Saturday, October 10th, for Europe and points east – is quite special, being perfectly trine deceptive Neptune, while Jupiter lies in partile sextile to Neptune, and with the Sun making an inconjunct or quincunx aspect to this oceanic and numinous archetypal energy. That is quite a lot of Neptune! Generally speaking, we might for the weekend expect things to be mentally a little foggy. The Neptune archetype takes us right out of the physical plane, to what lies Beyond, and is therefore uncomfortable within the normative 3D everyday reality, sewing confusion, idealization, and self-deception, or outright misinformation intended to deceive. This archetype is also spiritual in its essential nature. We might want to recall in this regard the famous lines from the Jefferson Airplane’s White Rabbit, “When logic, and proportion, have fallen soggy dead/ And the White Knight is talking backwards/ And the Red Queen’s ‘off with her head!’ / Remember what the Dormouse said / Feed your head – feed your head.” There is thus in fact also a distinct spiritual component to this current presence of powerfully invoked Neptune, to which we now turn.

Additionally, in this potent Last Quarter Moon configuration, we find Jupiter and Uranus both strongly highlighted, and this has implications for new ideas of Spirit emerging into the zeitgeist. The Sun and Moon closely oppose and square Jupiter in Capricorn. Uranus, at 9 ½ degrees of Taurus, is trined by Venus, and closely opposed by a slowing Mercury, about to retrograde starting next week, on the 13th. Mercury is already significantly slowing down and is thus more potent, so that our thoughts and communications could more directly partake of fresh and yet also somewhat illogical conceptions, as indicated by the Trickster archetype. Furthermore, Uranus aspects Neptune as well, in a mystical septile aspect within about ½ degree. The collusion between Neptune and Uranus in this configuration is quite telling, redolent of novel spiritual conceptions, and along with prominent Jupiter, brings an optimistic air to the proceedings.

On the mundane level of the collective, we could get a glimpse of a brighter worldview beginning to emerge, such as indicated by the recent turn-around on the part of the Republican Administration that there might be more stimulus moneys available, after all. Also, as the election nears, there could be a chance to find fresh cause for optimism in new results there. On each of our own individual levels, as well, we might be able to hold out for a little hope that we can make it through what has at times seemed to be an especially dark night of trials. This is as we simultaneously recognize that we are, each one of us, in the soup and under the spell of thoroughgoing structural transformation that affects many aspects of our lives, as we continue to evolve.

Meanwhile, the transformative signature of Saturn-Pluto-Jupiter stays extremely potent also. Retrograde Mars lies in partile, or same-degree, square with Pluto – with Eris less than two degrees away from Mars, herself in perfect square to the Saturn-Pluto midpoint. This is with the new Nature planet, Haumea, located at 27 + of Libra, only three degrees away from a perfect square and opposition to these points. The societal transformation sparked by Covid and Black Lives Matter, plus economic devastation, therefore goes on apace. This Last Quarter Moon furthermore represents a phase that notable 20th-century master astrologer Dane Rudhyar termed a “crisis of consciousness.” We, each one of us, individually, need to find our part within it.

The Sabian Symbols for this Last Quarter Moon configuration have as well something to share. They are, for the Moon, in the eighteenth degree of Cancer, “The Union Jack.” This national flag of the United Kingdom could be understood as a symbol for connection to collective aims. Indeed, the visionary impulse represented by Jupiter, Uranus and Neptune could be seen in this way, as taking us out of ourselves for larger purpose to the social order. Marc Edmund Jones, who caused these symbols to be created nearly one hundred years ago, references, “a given emphasis on the social or political side… high rewards for common efforts… a greater community of interest.”

For the Sun, in the same degree of Libra, we find the somewhat mysterious symbol, “Two men placed under arrest.” This is at first incomprehensible as an emblem for higher purpose, but Jones calls it, “a symbol of the maximum demand that might be made of any individual for self-consistency… (providing) a balance between inner and outer capacities... the self’s responsibility to its own essential characteristics.” The Sun’s symbol, seen in this light, does reference a fitting potential for enlightened self-interest that ultimately embraces the whole of the ideals of the surrounding collective. Indeed, when we are at our most authentic, the result of great introspective self-study and constant striving, we find that we are doing what we do out of love for what is right, above all, and in service to the collective interest of all creatures of this planet in which we have our being, conceived as fundamental members of our own body. May we, with the flashpoint of spiritual optimism and unexpected enlightenment provided by this potent crossroads moment, take heart in our process. We may need to meet with renewed courage our conviction to hold ourselves true to what the Universe and our higher selves are demanding of us, in this crucial hour. 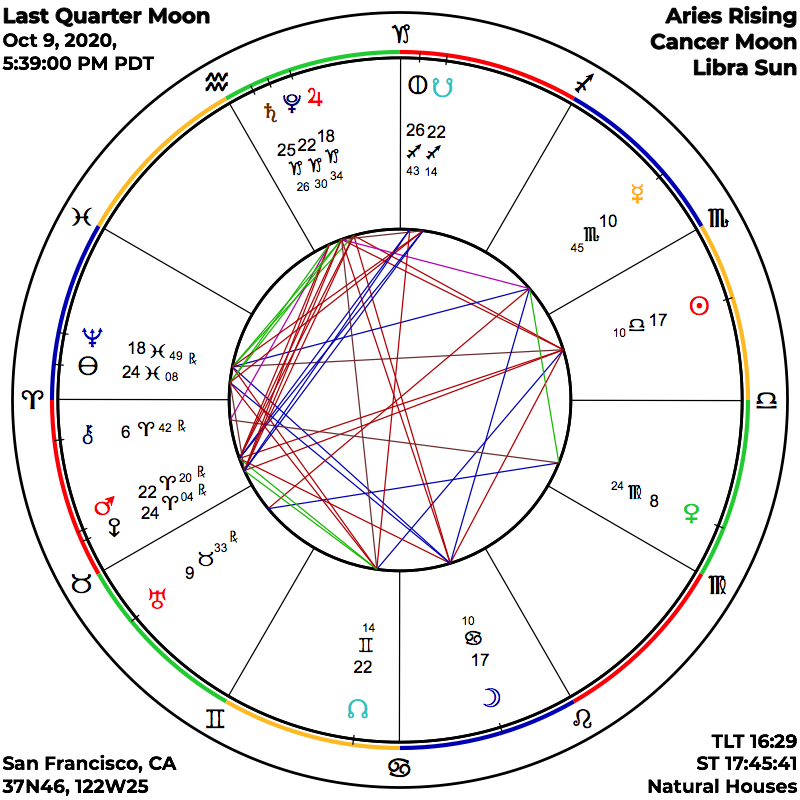 Chart for the Last Quarter Moon on October 9, 2020

The Astrology of October 2020 The Sun is in Libra

The Crescent Moon is in Capricorn: All day Mercury is Retrograde
Oct 13 - Nov 3 Other Announcements
Last updated October 21, 2020