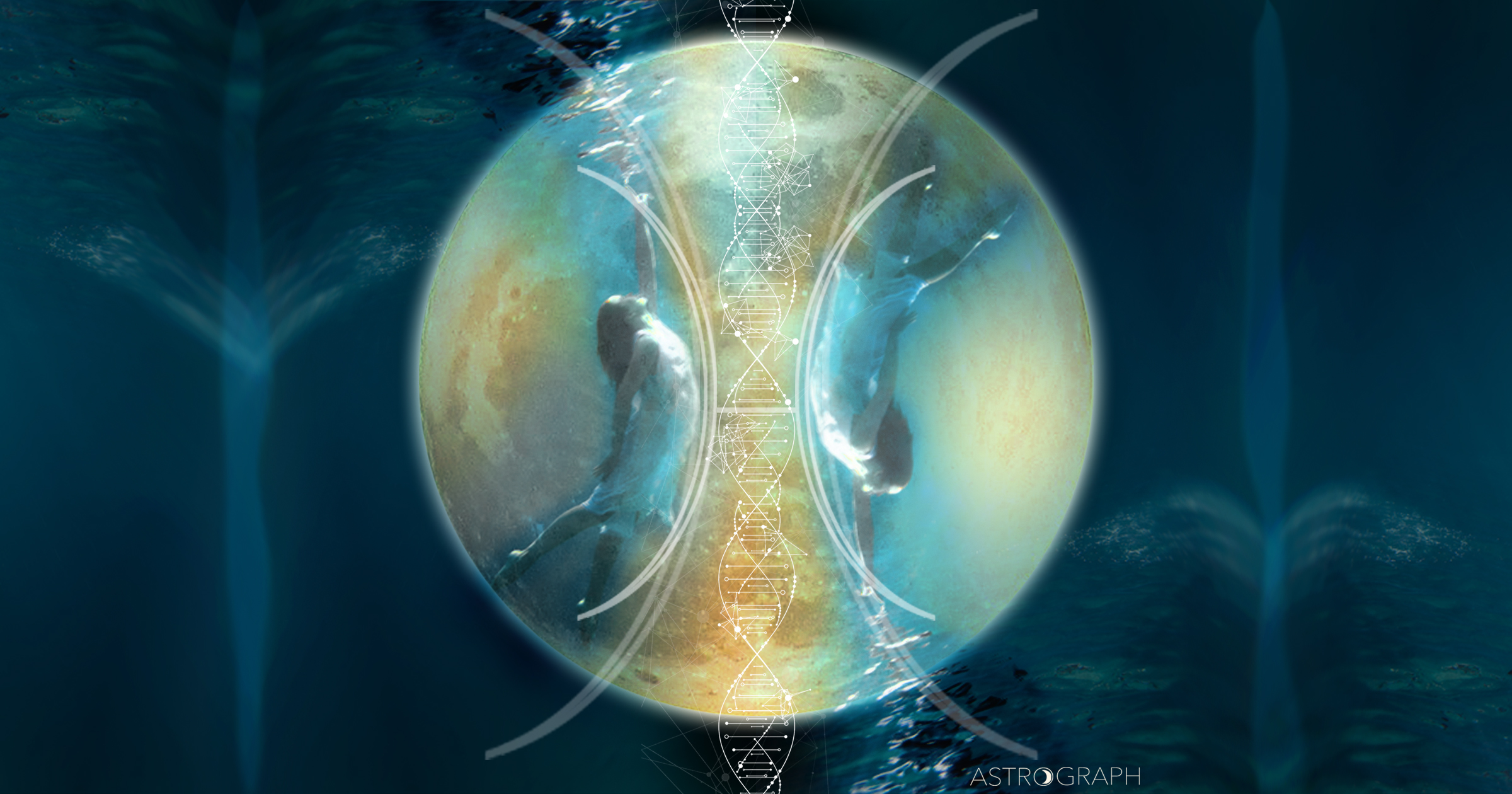 Posted on September 1, 2020 in Configurations |
By Henry Seltzer for ASTROGRAPH Horoscopes

The Pisces Full Moon of late evening September 1st, morning hours of September 2nd for the east coast and Europe, is another in the series of powerful lunations that we have been seeing lately.

This is because as we draw ever closer to the mid-November accentuated triple conjunction of Jupiter, Pluto, and Saturn, every outer planet is emphasized in this early September configuration. For starters, there is the ongoing T-square that Eris opposed to Haumea makes to Saturn-Pluto. The midpoint of these latter two heavyweights, their conjunction the hallmark of this chaotic year, is 24 degrees of Capricorn and 20 minutes, while the position of Eris is 24 Aries 24.

Just as important in its local influence is the strong partile (or same degree) trine that the Sun, at 10 degrees of Virgo, makes to Uranus in Taurus, with the Pisces Moon in sextile. Uranus is also septile

Neptune, within ¾ degree, and quintile Venus; this while Venus, at 25 + Cancer, is precisely opposed to Saturn. So there you have all the major players. Neptune is further bolstered by an active sextile from a slowing Jupiter in Capricorn, with Jupiter due to station on September 12th, increasing this potency. What does it mean to see this volatile display of outer planet interconnection occurring in concert with the current Full Moon? For one thing there is the much-needed structural transformation (Saturn-Pluto) of our society, which will forever change its very character.

The thoughtful and science-featuring time of Covid-19 will help a vastly different social setting begin to emerge on the other side, and this is on pace with the personal psychological development and metamorphosis that we are all going through, each and every one of us, as we are proving by our brave acts ( Eris) during the significant cultural reset of this vital year.

The fact that there is so much Saturn in the current configurations is both a challenge and a virtue. True, we might find ourselves stymied in what we are intending to accomplish, having to do the same simple task three times before it is done, but we must always remember that with Saturn comes as well great ability to focus on our true objectives, dedication to purpose, and the stamina to go that extra mile in order to get it right. Saturn slows us down; the water in the irrigation ditch when moving fast does not penetrate the soil; slow and steady not only wins out in the long run, it helps allow the lessons of what we are engaged in to actually sink in.

We may also want to ask ourselves, what is our task ahead, in these Covid times. I myself believe that we are all given a terrific opportunity now to take a turn to the inside, to meditate on our deepest values, and to attempt to suss out where in the world we might be heading. Those of us who are dissatisfied with a current profession or job have a chance to reframe this as, instead of any sort of failure, rather a stepping-stone to new adventure. “My current situation pays the bills while I figure out what I am supposed to be doing.” This is quite consistent with strong Eris, in square with Saturn-Pluto. Eris has been shown to have the characteristics of a Feminine Warrior energy in support of soul intention, which implies discovering, and beginning to act upon, your deepest values.

The fact that Eris, in this T-square to Saturn-Pluto, is currently opposed to Haumea, representing an archetype of profound connection to Nature, and natural law, adds a powerful extra dimension to this inner journey. Only those desires and values that satisfy the constraints of Natural Law are truly worth pursuing. This implies adhering to your internal moral compass, and to right relationship to others around you. As you come closer to understanding your destined life purpose, only these stand-up and light-filled types of bottom-line principles will survive as your true guiding spirit.


The Sabian Symbols for this Full Moon might add an additional perspective. For the Sun, in the eleventh degree (10 +) of Virgo, we find, “A boy molded in his mother’s aspirations,” and we might here substitute Mother Nature, making this symbol an obvious reference to carrying forward the principles of the Cosmos in which we have our very being. Marc Edmund Jones, who caused these symbols to be created nearly a century ago, writes: “The soul is fundamentally a matrix of itself (in) the ideals it holds… in response to inner and almost irrevocable compulsions… personal excellence sustained in its own creative consciousness.”

For the Moon, in the same degree of Pisces, we find, “Humans seeking illumination,” and this is another symbol of this drive for inner excellence of values and of accomplishment. Jones comments upon, “unswerving maintenance of purity in motive and expression… a manifestation of the potentialities to which the human spirit must devote itself, to be itself … an effective alignment with ultimate reality.” Indeed, while we live in utterly complex times, our basic vision is quite straightforward; it is that we consistently and untiringly strive to be the best that we can be, to inhabit our most authentic self that is always wanting to emerge, when we can get out of our own way and simply let it. 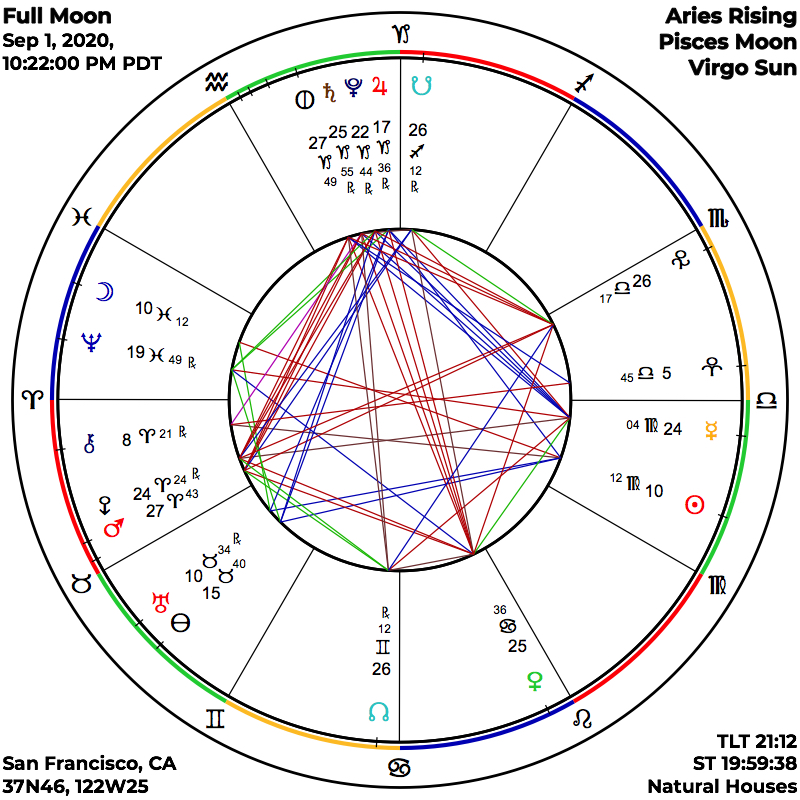