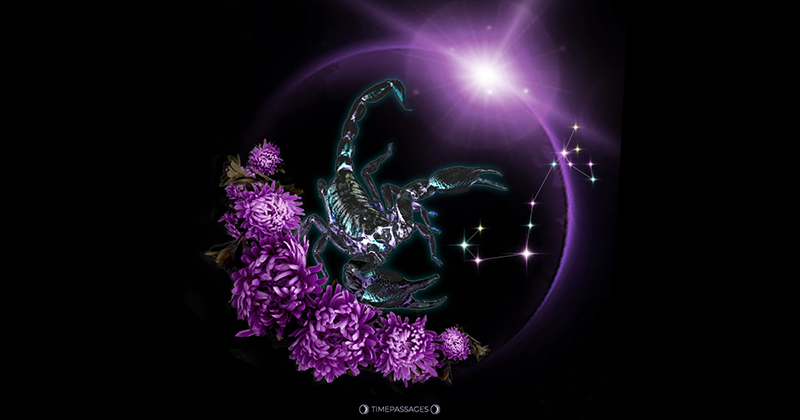 A New Moon Solar Eclipse of Transformation and Relationship

Posted on October 21, 2022 in Configurations |
By Leslie Benson for ASTROGRAPH Horoscopes

That time is here, again, when we greet the transformative tides of yet another eclipse season. This one begins with the New Moon Solar Eclipse taking place on October 25th at 3:49am in early Scorpio, and includes the Full Moon Lunar Eclipse in Taurus two weeks later. This extremely potent Full Moon is forthcoming on November 8th. All eclipses bring sweeping winds of change and a degree of intensity, and this pair of eclipses goes even further, being accompanied by outer planet configurations that are rather extreme. The Solar Eclipse New Moon configuration on October 25th is multifaceted, unearthing transformational processes that will undoubtedly touch our lives in meaningful and far-reaching ways. One of the main highlights is the conjunction of the Sun and Moon with Venus, bringing the topics of love, relationships, value and self-worth to the tippy-top of the list. Beyond that are some heavy hitting square aspects, along with plenty of outer planet activity to boot, as well as both Saturn and Mars moving slowly near their stations. This taken altogether paints a complex and varied picture for us in this Autumn of 2022, and, because eclipses, rippling out into the coming six months.

The placement of the Sun and Moon in the Solar Eclipse chart is at 2º Scorpio, and this is in a same-degree conjunction with Venus, the goddess of love and beauty. Scorpio placements ask us to look deep inside ourselves, beneath the surface layers and into the shadow realm where the mysteries and secrets of the cosmos dance within the velvety dark. Scorpio Season is the time of year when the veils between these worlds are thin, and we can look to find increased awareness of the mystical and unseen forces of our universe. With such a pronounced presence of Venus in this New Moon, we may find ourselves coming into greater contact with what intimacy truly means for us. And this covers intimacy not only with others, but with ourselves, with nature, with the Earth and all of its creatures, with the fabric of Life itself.

We also find in this configuration Black Moon Lilith in very close trine to the Sun, Moon, and Venus, being at 1º of Cancer. This placement speaks of a reclamation of parts of self that have been outcast within our psyche, along with the process of re-integrating the wisdom of our sacred anger, grief, sexuality, and sorrows. These are difficult parts of us that tend to lie in the outskirts of our psyche, where we cannot always clearly reach them. Confronting these can be a very troubling kind of process to go through, although with the Water signs and this trine aspect, there may be more flow, grace, and ease inherent around such significant movement. My belief is that it is through such endeavors that we may find healing, and in turn greater access and capacity to be available for intimate connection and relationship. Jupiter is also in minor aspect to the eclipse degree making an inconjunct (or quincunx) from 0º Aries. I imagine this as a subtle but powerful stoking of the flames; a friendly boost from good ol’ optimistic Jupiter. This nudge can help us anchor in the context of our own greater sense of meaning, so that we may find the strength to forge on, even when the path ahead feels overwhelming or daunting.

The next aspects to examine are Mars in Gemini square to Neptune in Pisces, and inconjunct Pluto in Capricorn, with Mars moving very slowly as his retrograde station on October 30th draws near. These two aspects may have us feeling at odds, either with others, or with ourselves in inner conflict. Transformation is in the air. We also see Mercury in trine to this Mars position, and then Pluto, too, in that mix, being in square to Mercury. Also Eris opposes Mercury and squares Pluto. Mars in Gemini at its best can bring the brilliance of the mind into concrete action, but slowing to retrograde and square to these intense outer planets, including Neptune, this may look more like slow going, feeling uncertain of which direction to head, and potentially spinning in thoughts of what to do without a clear direction of where energy is best spent. If you do find yourself in such a spin, I encourage a slowing down and settling into the present moment, and direct relationship with Spirit, however that looks for you.  While Pluto directly represents fundamental transformation, Neptune’s presence tends to create gateways for support and guidance from the Divine. This is probably not the best time for declarative and finalizing action, but rather a time to simply be present with what arises, and allow the storm to settle before making big choices, declarative actions, or jumping to conclusions. Our vision will likely be clearer once the cosmic weather calms, perhaps only by next year.

Finally, we have Uranus somewhat emphasized here in his square to Saturn, which has been large and in charge for many months, and now makes its final ‘hurrah’ in the end of 2022 and early 2023. Mercury trines Saturn and aspects Uranus.  This Saturn-Uranus aspect is not as pronounced in this Solar Eclipse chart, but it will be front and center in a very intense way in the Lunar Eclipse that comes along in two weeks’ time. This aspect is incredibly tense and fraught, and when you throw in the powerful transformational forces of an eclipse and with prominent Pluto, we’ve got a recipe for major growth through strife and turbulence. We are tasked to synthesize and be present with the antithetical forces of Saturn and Uranus.  How do we tend to our own needs for both the safety of the familiar and the allure of novelty?  And for the security to feel safe versus the wild aliveness when we take a chance and jump into the unknown; for our sense of responsibility and duty, along with as well the urge to break free and leave it all behind.  These are big archetypes to tangle with, and from which revelation and revolution might be born… although not without disruption and confrontation, both within ourselves and out there in the big wide world.

To see how this New Moon eclipse is activating your own chart, look for where your natal placements land among the early degrees of Scorpio and Taurus, as well as Leo and Aquarius, the Fixed signs.  These will represent the themes and areas of life that will be most greatly influenced.  The Sabian Symbol for the eclipse degree is “A house-raising,” and this symbol describes the indomitable nature of the human spirit, and emphasizes simple every-day living, as well as the inherent independence and interconnection we have with people in our close circles and in our wider communities. The keyword is helpfulness, and directs our attention to grass root movements, and ways that folks can band together, especially when they are in great need of assistance. In this intense eclipse time, may we have ample support and connection with those who lift us up and may we, in turn, lift them. As we do our sacred individual homework, and the healing that comes from inside plus being in connection with others, may the great winds of change sprinkle seeds of blessings in our wake far and wide, across every landscape with which we come into touch.