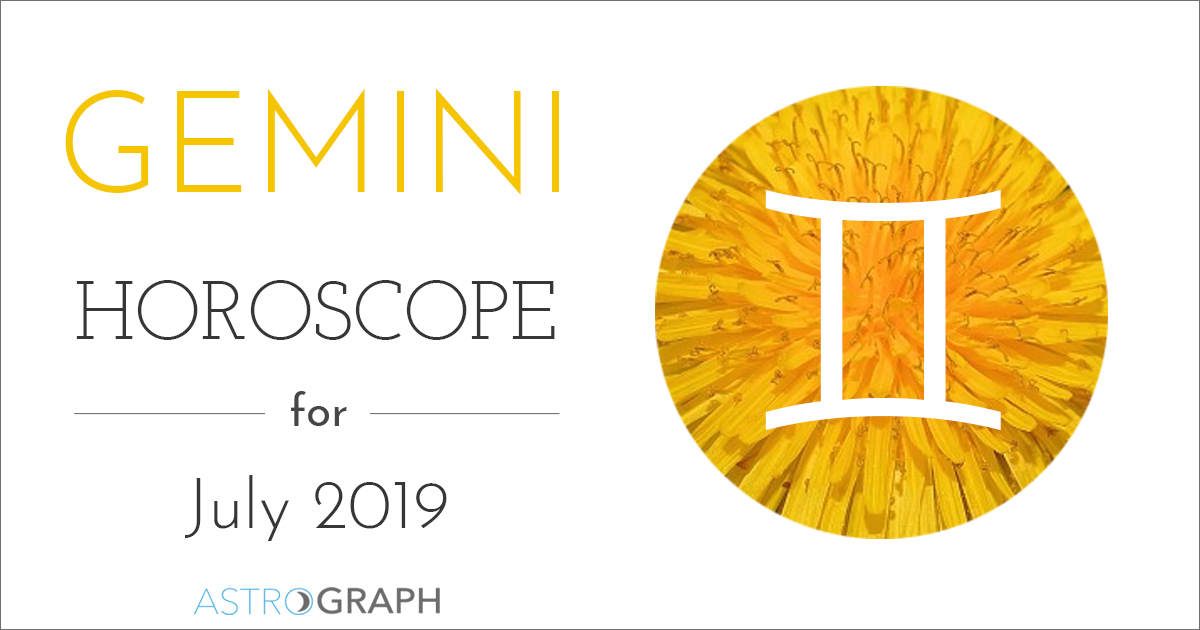 Posted on June 30, 2019 in Gemini |
By Henry Seltzer and Adam Elenbaas for ASTROGRAPH Horoscopes

This month is another in a series of exciting and rather intense cycles, Gemini, especially with Mercury, your ruler, in retrograde motion for nearly its entirety. This brings an introspective quality to all of your thoughts and communications, with the concerns around your values, your resources (including financial resources) and inner exploration all very much playing out in your musings. You recognize that understanding your life mission is a significant motif for you these days, but are perhaps wondering how exactly to proceed with uncovering the underlying truth of the matter. Partnership is a vital theme for you this month as well, and could additionally be involved in issues of confusion or illusion concerning your career goals. Your outer world statement, and your creative contribution to it, is the subject of intense scrutiny after Mercury's station to retrograde motion on July 7th. Your intuition will be your best guide as you attempt to recognize where your life is heading from the standpoint of soul perspective.

July begins astrologically on July 2nd with a powerful Solar Eclipse taking place in the sign of Cancer, in your second house of income and expenditures, possessions and resources. With this eclipse comes a new cycle of activity and change in relation to all matters related to business and finances, income and bills, as well as your relation to material things in general. It’s a great time to start a new diet, shift your spending habits, find new income streams, or to pay off debt and get a fresh start out of the red. The eclipse also calls into question your deepest personal values and asks you to consider how you are spending your time and energy, in general. In this regard, it’s a good time for personal and financial realignment.

Between July 7th and 9th, Mercury and Mars will conjoin in Leo in your third house of communication and learning, also neighbors, siblings, and the mind, just as Mercury turns retrograde. This transit may bring with it a difficult piece of news, or a more challenging or confrontational communication dynamic in your relationships. You may feel the need to voice your opinions or ideas more strongly right now, or you may be forced to revise or reconsider something. Although it would also not be unusual to see the severing or terminating of bonds or agreements during this transit, it’s worth noting that after Mercury’s retrograde, it will eventually move back into a new conjunction with Mars later this Summer, perhaps indicating that what appears as an impasse will eventually lead back to things getting settled.

Between July 9th and 16th, the Sun in Cancer in your second house of money and resources will go through a series of oppositions to Saturn and Pluto in Capricorn in your eighth house of other people’s money and resources. Then, on July 16th, a Lunar Eclipse will fall in the sign of Capricorn in your eighth house, closely conjoined with Saturn and Pluto. This could spell a potentially challenging period financially, or it might indicate a series of conflicts around money or business, debt or taxes. The concept of “other people’s money,” an eighth house keyword, might come up for you in some fashion, while constraints and pressures that you are feeling right now, however difficult they might be, can also be understood as signals from your unconscious, pushing you in the direction you need to go in order to receive a deeper level of support, moving forward.

Between July 16th and the 21st, Venus in Cancer will also move through your second house of money and finances, making the same oppositions to Saturn and Pluto, while reactivating the eclipse point. This brings a second wave of intensity surrounding the changes and challenges described above.

There is good news here as well, in that Venus in the second house should also bring a degree of good fortune, benefits, and harmonious relations or collaborations, bolstered by Saturn, grounding these effects. The hope would be that you could relieve any tension that has been building around money and finances this month by studied compassion and allowing big-picture thinking to buoy you up. Partners come into this motif as well, and could prove helpful. At the same time, the oppositions that Venus makes also call to mind the potential for value conflicts, or interpersonal or romantic challenges, related to money and finances. With your ruling planet, Mercury, also retrograding into your second house in the sign of Cancer later in the month, after the 19th, money and business, bills and expenses, budgeting and earning, are likely to be directly related to some deeply emotional changes you are trying to implement this summer.

Finally, on July 31st, the New Moon in Leo, conjoined with Venus, falls in your third house of communication and the mind, creating a square with Uranus in Taurus in your twelfth house. The Moon cycle ahead thus promises a story of mental or intellectual innovation, freedom, and even rebelliousness. You may also find that relationships or friendships are evolving in interesting ways or that you are craving a deeper level of intellectual or romantic freedom. The beware here is to watch for the tendency to put your foot in your mouth, for misunderstandings and miscommunications. It is possible that an aura of rebelliousness / erratic energy could sabotage important relationships or disrupt your daily flow.