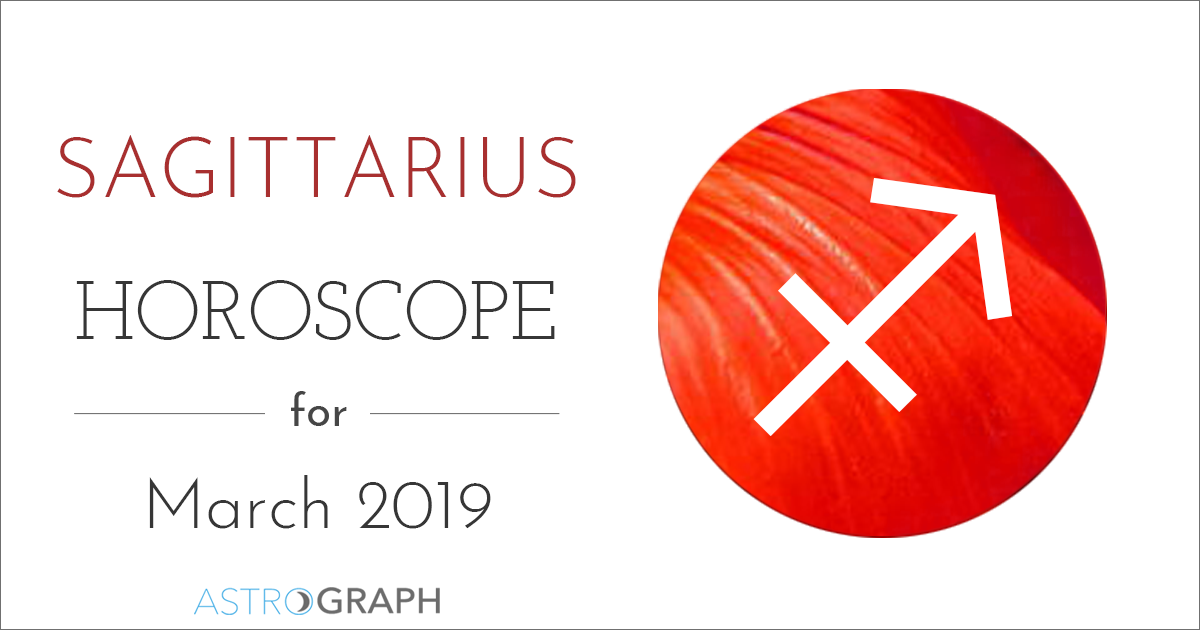 Posted on February 28, 2019 in Sagittarius |
By Henry Seltzer and Adam Elenbaas for ASTROGRAPH Horoscopes

is another rather intense monthly cycle for you, Sagittarius. You are in a self-reflective mode, especially after the 5th, when the Mercury Retrograde period kicks off in your home and family sector, the place of your psychological roots, enhanced by the Pisces New Moon there the very next day. You are essentially going into your depths for answers to questions you didn’t even know to ask, so that it helps to pay the closest possible attention. You have for many months been dealing with a basic instability at the core, highlighted during February, and while this is stressful, it is also transformational. You might discover facets of your current behavior that are inauthentic, or in other words going against the grain of Who You Really Are. Once you recognize this, you can act on behalf of your growth, as you feel called. The introspective mode you’re in is therefore a benefit, in order that you might look more closely at yourself, your triumphs, and as well your necessary adjustments.

The month begins with Venus in Capricorn in your second house of money and resources making a square to Uranus in Aries in your fifth house, indicating a momentary and sudden disruption, change, and possibly creative breakthrough around the topics of both money and relationships, but don’t be surprised if you’re also writing a check or stuck with an unexpected bill due to a rush of rebellious thrill seeking.

On March 6th, the New Moon will conjoin with Neptune in Pisces in your fourth house of home and family, just as Mercury is also turning retrograde in Pisces. The month ahead is all about your family, your parents, and your home environment, and especially topics related to communication, truth, and emotional honesty.

On the same day, March 6th, Uranus will also enter Taurus and move into your sixth house of work, sickness, and service, where it will stay all the way into 2026. Because Uranus is the planet of rebellion and disruption, but also liberation, don’t be surprised if your day to day routines are being shaken up. Even if it’s somewhat erratic or annoying to deal with the unexpected changes, remember that Uranus also brings liberation.

Between March 14th and the 20th, Mars in Taurus in your sixth house will then make trines with Saturn and Pluto in Capricorn in your second house of money and resources. This is an industrious and hard-working transit. You can make progress right now in your professional life, but it will likely require a methodical and highly structured approach, or it may ask you to commit more of your resources than you would like, all of which may be somewhat annoying considering your natural free-spiritedness.

Then, on March 20th, the Sun will pass through the gateway of the Spring Equinox and conjoin Chiron in Aries in your fifth house of creativity, children, and pregnancy, bringing themes of both healing, wisdom, and initiation along with it. At the same time, the Full Moon in Libra in your eleventh house will highlight the topics of friends, groups, and allies, perhaps bringing along with it themes of justice, beauty, and balance. These are both beneficial transits that will gift you with helpful resources, both within and without.


Right around the same time, Venus in Aquarius in your third house will also square Mars in Taurus in your sixth house, adding a strong sexual, creative, or intellectual tension to the picture. You may struggle this month to find the most sensitive way of speaking your mind, and you may feel easily misunderstood at times, but don’t lose your patience.

Finally, between March 24th and April 2nd, Mercury will conjoin Neptune in Pisces in your fourth house of home and family, Venus will enter Pisces, and Mercury will then turn direct again conjuncting Neptune one last time. Once again, the core themes of the month are home and family and a process of healing and deeper understanding happening therein. If you’ve been feeling unclear about things on the home front, expect the fog to slowly lift during these coming weeks; the beauty, romance, and harmony of Venus will start to truly fill your domestic sphere of activities.