Posted on April 28, 2014 in Configurations |
By Henry Seltzer for ASTROGRAPH Horoscopes

The Solar Eclipse and New Moon of late Monday evening, early Tuesday morning, in Taurus, completes the duo of April eclipses. Following the exact alignment of the mid-April cardinal grand cross that featured Uranus and Pluto, this lunation still partakes of the Uranus-Pluto square and has the feel of an extra-powerful New Moon. The Sun and Moon in conjunction are found across the Zodiac from the stodgy and limiting energy of Saturn and in forming inconjunct with a self-reflective Mars in retrograde. We are launching ourselves out into new activity, in very practical terms, and the question becomes, activity to what purpose? It is a truism that these difficult times have left us wondering where to turn, and Uranus in square with Pluto speaks to exactly this issue. We must finally come down to an amalgam of practical necessity combined with inner knowing, addressing that place in the social setting where we feel within ourselves the ability to plug in, in a meaningful way, and also where we feel the call to make that contribution that is uniquely ours to give.

That Saturn is invoked speaks to the lessons of practicality. There is inspiration in the cosmic alignments of Uranus in square to Jupiter and Pluto, representing a plethora of imaginative ideas at work within us, cosmic epiphanies that could lead us to a better personal self-definition going forward, and also to more partnership oriented and flexible society. With inspiration we can avail ourselves of the courage to leave behind the tracks of old paradigm thinking that no longer works for us. Yet we must as well have the ability to take concrete steps in the direction that our inner voices are telling us to aim for. No matter to what we most aspire, guided by our highest intuitional spark of finding our true selves, Saturn represents that stern taskmaster that wants us to keep our noses to the grindstone and our feet on the path

Mercury also enters into the New Moon eclipse configuration, and the grand cross that is now separating, residing at the 13th degree of Taurus, trine Pluto, semi-sextile to Uranus, and inconjunct to Mars, while Jupiter remains within orb of a sextile to the Mercury degree. The Mercury involvement is fascinating, implying that you can come into greater conscious alignment now with your process. It is useful to commemorate Mercury in communication with others around you, or in journaling your insights. Following the intensity of the mid-April alignment, you come to a new starting place, a little wiser and more grounded in your commitment, and in growing possession of a better-formed awareness of what you are striving for.

Chiron, the Wounded Healer, is also involved in this New Moon event, participating in a forming grand trine in Water signs with Jupiter and Saturn. This aspect pattern grows stronger into May, throughout the first half of the lunation cycle that follows this New Moon. Since Chiron represents where we are wounded, through early conditioning and untoward events, and where we have the opportunity to grow beyond this residue of childhood trauma, this is therefore an opportune time to tune in within yourself to the dark places within you that hold you back from fully actualizing the person that, deep in your heart, you intend to become.

The Sabian Symbol for this New Moon in the 9th degree of Taurus is unseasonal. It is: "A Christmas Tree, decorated." It is quite interesting for our context now that the Christmas celebration derives from pagan sources that are aligned with the Winter Solstice, when the Sun enters the cardinal sign of Capricorn, the sign of Saturn's rulership. This symbol thus relates to the four cardinal signs that are currently highlighted in these late April skies. It is given by Marc Edmund Jones the keyword SYMBOLIZATION and he adds a comment regarding "achievement of complete self-satisfaction through a simple sharing of one's potentials with his [or her] fellows." We are reminded that we indeed live in a symbolic world, a world of illusion and yet of concrete practicality also, one in which we must strive to make a difference and yet take it lightly as well, while remaining deeply centered in our mission to rekindle our cosmic heritage. 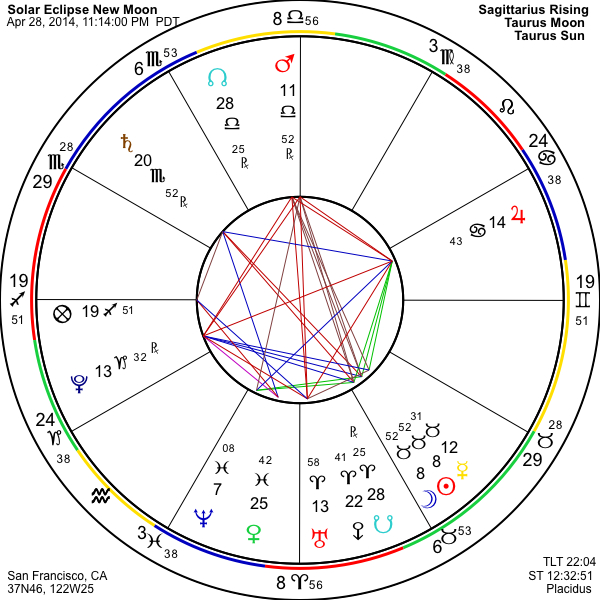