Posted on April 6, 2014 in Configurations |
By Henry Seltzer for ASTROGRAPH Horoscopes

Monday morning's First Quarter Moon represents a difficult time. There is normally an increase of interpersonal tension with the Sun and Moon in square, leading to new ways of looking at our current situation. This time the theme of feeling somewhat at odds with our destiny is further augmented by a T-square that the Sun and Moon make to feisty Mars. We find the red planet just a couple of degrees away from exactly opposite the Sun, moving retrograde through Libra. This would be a recipe for a volatile increase in reactivity, were it not for the very internal nature of this Mars, not only in retrograde motion, but located in the sign of its detriment. Mars is happiest in Aries, the sign he rules, and in the opposite sign of Libra he feels less at home, although decidedly more diplomatic. As we search deeply for answers to whatever is coming up for us during the course of this powerful month, we might discover within ourselves a potent intentionality for transformation.

Aries is also where the Sun and Uranus currently reside, still in relative conjunction, so that we currently have plenty of intuitional insight at our disposal. Mercury also enters Aries this same morning, increasing the quick pulse of the Aries energy, and creating a mixed message for communication with others around us. We are with some part of ourselves deeply inner at this particular juncture, as indicated above, and partly very much simply out there and on the surface, perhaps moving with an even more frenetic pace than usual.

It is useful to become as aware as possible of these equal tendencies, because we live in both of these worlds, inner and outer, simultaneously. We win when we refuse to neglect either one, choosing instead to stay centered in our deep soul purpose, while still paying close attention to the myriad details that life in the 21st century keeps handing to us.

We can use the energy of this retrograde Mars — soon to figure in the cardinal cross of the 20th to the 22nd of this month — to look more carefully inside ourselves, searching for our rock-bottom nature, and our truest set of motivations. We might also be able to encounter relief from fear, allowing needed change to happen in our lives, as that idea comes to the forefront. We have in this First Quarter Moon an aspect from both Sun and Moon to Chiron, the Wounded Healer, in mid-Pisces. The reminder is that while fears might very well come up for us, as we leave behind the comfort of a safe and yet perhaps dysfunctional past, these difficult feelings are not there to stop us but to arouse our curiosity for how they are constellated, and where they may have originated in prior wounding.

This is all leading up to the Full Moon eclipse next week, Monday April 14th just after midnight on the West Coast, and, even more importantly, the Easter Sunday cardinal cross another week after that, lasting for three days, which brings together the energies of Uranus, Pluto, Mars and Jupiter. Because the trickster energy of Uranus is invoked over the entire period of this Aries lunation cycle, and especially at the time of this Quarter Moon, we are finding synchronicity everywhere. We can use the intuitional insights of this month to gain important understanding of ourselves at deep levels as we go over the waterfall of the Uranus-Pluto square.

The Sabian Symbols of the Sun and the Moon are instructive at this dangerous and yet quite interesting juncture. They are, for the Sun in the 18th degree of Aries, "An empty hammock," reminding us of the void of silence that we all have deep at the core, where we in some sense always reside; for the Moon we have "A hen scratching for her chicks." Indeed we need to nurture ourselves in all the usual ways as we also explore the vast profundity that we find inside, at the very heart of things. 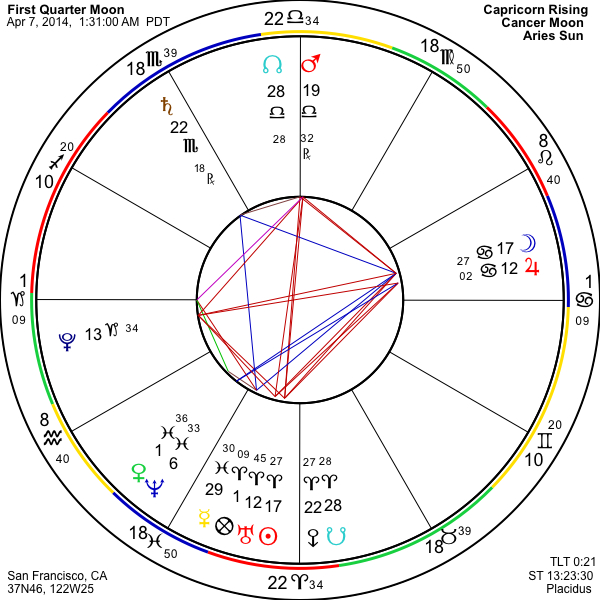