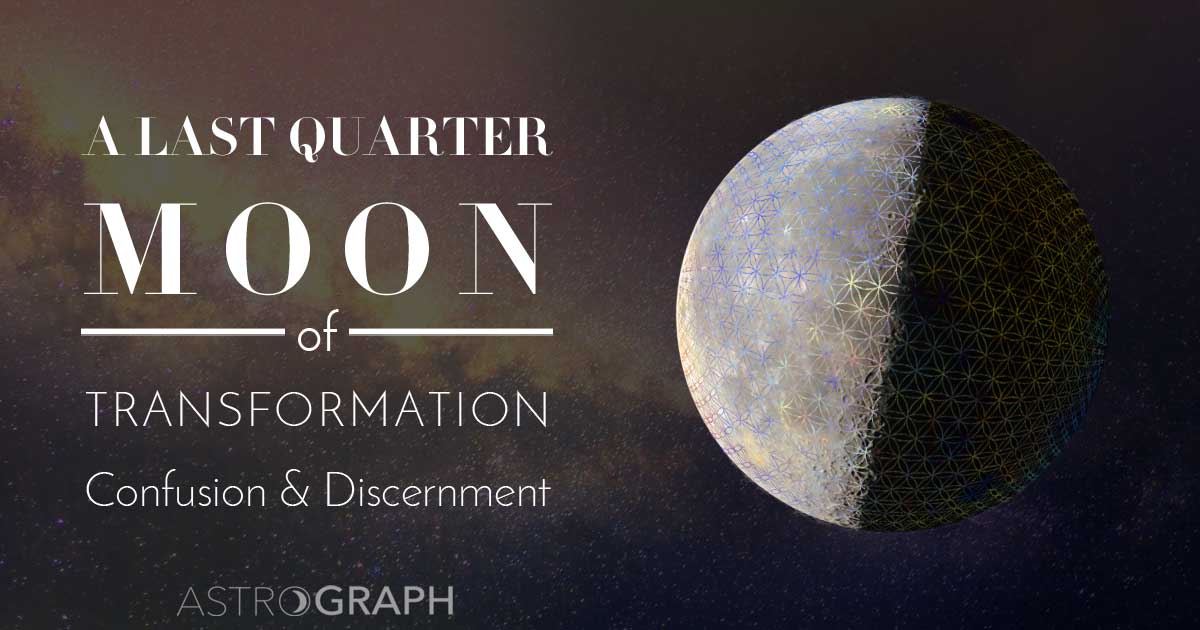 A Last Quarter Moon of Transformation, Confusion, and Discernment

Posted on December 19, 2016 in Configurations |
By Henry Seltzer for ASTROGRAPH Horoscopes

Tuesday’s Last Quarter Moon is an important lunation, with as always the Sun and Moon in square with each other, signaling a degree of tension in this penultimate week of the year, and also marks the timing of the Winter Solstice, taking place in the early morning hours of the very next day. The symbolism that is present in this configuration therefore also describes the seed of the year that follows, which is likely to be a divisive one as well. The current quarter moon and also the Winter Solstice chart feature Jupiter and Saturn in close aspect to Uranus, by opposition and by trine, another signature of the polarities that currently separate segments of our society and, in spite of these differences in viewpoint, as well the potential for somehow coming to mutual understanding. Neptune is emphasized. In particular, the Winter Solstice partakes of a powerful presence of Neptune, as highlighted by the Moon in the same degree of Libra. This is a very Neptunian and factually challenging time, when we can take nothing for face value, characterized in popular press as “post-truth,” and the indications are that this coming year is likely to be the same. With prominent Neptune this is also an especially precious and spiritually revitalizing end of year period. Uranus and Jupiter in close combination with each other also signal the presence of brilliant ideas and of new ways of seeing the world, something that we very much need – in the midst of these fractious and perilous times – to provide for the safety of ourselves and of the very planet that we live on.

Mercury is also now retrograde, and is quite interesting to note that Mercury’s recent mid-Capricorn station took place within a degree and a half of Pluto, indicative of radical changes in perspective. As many will already recognize, for the coming several weeks Mercury is retrograding backward through Capricorn, to visit Sagittarius once again, briefly, in the early days of the New Year, recovering lost Zodiacal longitude only by late next month. And as we look around and reassess, the odd thing is how close we are to a paradise upon this earth. Solar and other alternative energies are cost-competitive with the fossil fuels extraction industry, so that a simple gesture that can take us away from these destructive technologies is more than ever possible. This is only hampered by ignorance and by greed, so that the ability to discern our choices that we must make, both individually and collectively, is of utmost importance, in the midst of the inward turning represented by the Mercury Retrograde period of self-reflection. This is likely to be a quite powerful Mercury Retrograde, owing to this radical starting point, and a time when many of our perceptions will alter.

Because Pluto is currently emphasized, both by Mercury as it retrogrades, and by the positions of Sun, Moon, Venus, and Mars in aspect to Pluto at the quarter moon, the transformational nature of these final weeks of the turning of the year is also very much in evidence. Uranus and Pluto remain in square alignment, now a mere 4 degrees off from exact. We can look to the remainder of this decade to bring further structural changes, perhaps beyond anything that we can envision. The challenge for each one of us is that we keep our wits about us, and our heads held high, and be willing to sacrifice in order to become more fully ourselves.

The Sabian Symbols for this Last Quarter Moon are, as always, quite interesting. They are, for the Sun in the final degree of Sagittarius, “The Pope.” This is to be taken symbolically, so that it is not the actual church leader in Rome to which the symbol points, but rather to the possibility for each one of us to become our own direct conduit to higher power. Marc Edmund Jones has, “human excellence on the side of the special values exalted in social and political hierarchies… [our] ambition as entirely inadequate except as able to meet some exceptional need of everyday experience... enduring service to the race at large.” For the Moon, in the final degree of Virgo, we find, “A false call unheard in attention to immediate service.” This too implies the need for discernment. Jones remarks upon, “human responsibility as an immortality of the soul, a way of living which has achieved an absoluteness of attitude and understanding and is able in consequence to dramatize a high personal competency in everyday problem solving… genuine integrity.” Indeed, in the face of deception and ill-defined parameters of the social contract, or illusive and even lying statements by leaders in seeming contradiction of each other, we have only one thing to fall back on, and that is ourselves. In consequence, heading into an unknown but very viable future, we must strive to build our defenses and our inner strength, to become the very best version of ourselves that we can possibly be. Our collective future depends on it. 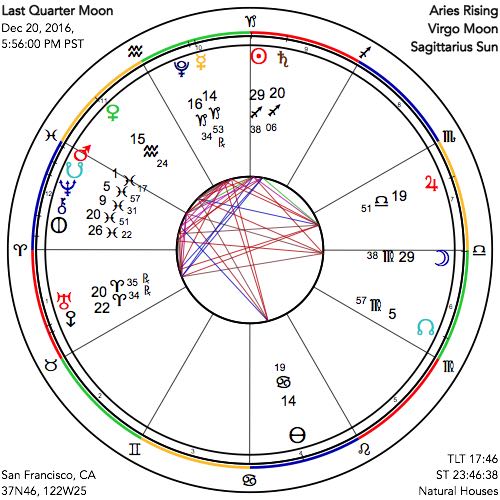