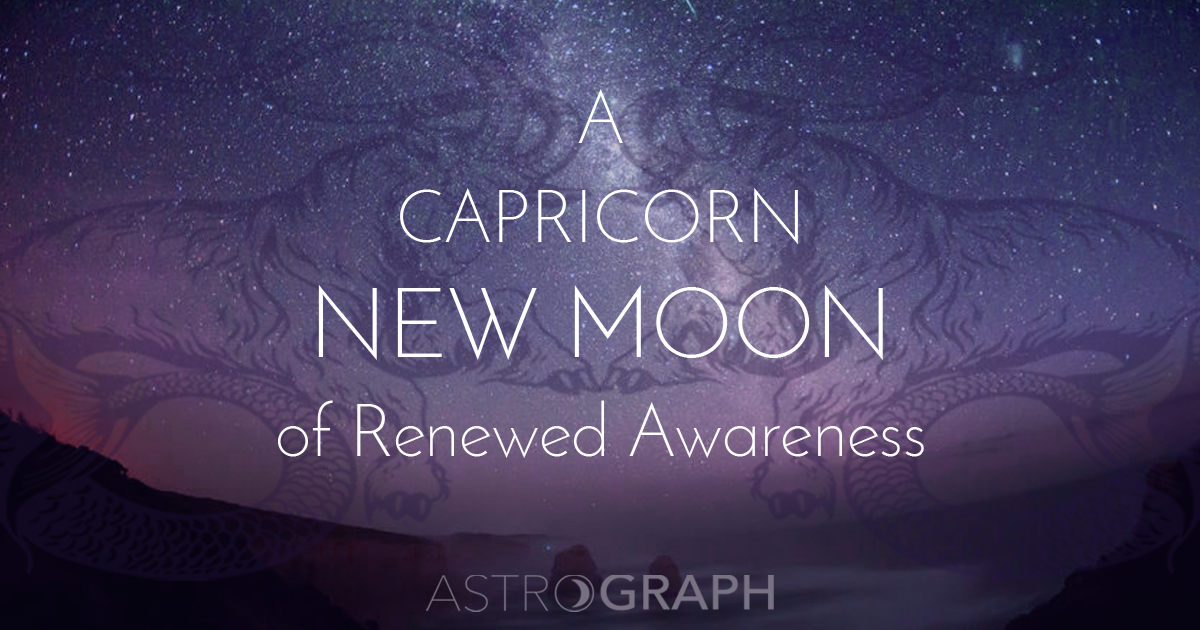 Posted on December 28, 2016 in Configurations |
By Henry Seltzer for ASTROGRAPH Horoscopes

The Capricorn New Moon of late Wednesday, early Thursday morning, December 28th/29th, is a rather intense lunation, signaling the advent of a difficult but educational monthly cycle to unfold over most of January 2017. This is indicated by outer planet connections that are reminiscent of the volatile sixties, plus a prominent position of retrograde Mercury and a Mars-Neptune conjunction that are each closely linked to the New Moon degree. Mercury in backward motion encourages us to look more deeply into whatever is going on, including our inner motivations and the ongoing metamorphosis of our lives over these past few years of massive change. This is the hallmark of the Uranus-Pluto square that is the signature outer planet dynamic of our decade, active until 2020. In this New Moon configuration the degrees of separation from exact for Uranus square Pluto have dwindled to a mere four. The Sun and Moon are widely conjunct Pluto, while Jupiter aligns in very close opposition to Uranus, with Saturn in forming trine, and with Saturn also in parallel aspect to Pluto. The transformational activity of Uranus-Pluto is thus quite active in these late December skies, along with an opportunity for far greater awareness of the (r)evolutionary changes that we all find ourselves in the midst of.

We also find quite a lot of uncertainty in this New Moon configuration. It is fascinating to see the position of retrograde Mercury, the Sun and Moon, and also Mars in Pisces all at or quite near the 7-degree mark of their respective signs. The partile or same-degree sextile between the New Moon degree and Mars in Pisces occurs just as Mars closes in on conjuncting Neptune within little more than two degrees. This means that not only is Mercury quite prominent now in its backward momentum, but also that Mars-Neptune is extremely highlighted as well, indicating that when we try to understand where we and the surrounding society are at, we encounter a great deal of difficulty at arriving at any one truth. Neptune is a shape-shifting archetype of paradox and other-dimensional realities that lie beyond the physical plane. As such it does not mingle well with ordinary life, leading to confusion and an emphasis on spiritual over practical concerns. Confronted with fake news and Internet statements gone viral that play fast and loose with the so-called “facts,” we have recently been questioning exactly what is truth, and how do we know it. We are also confronted with questions concerning our individual acceptance of massive change coming down, versus resistance to change, and which of these factors predominate in our daily lives. Perhaps it is little of both.

In this regard it is of interest to recall that Chiron, the Wounded Healer, is fully participatory with the Uranus- Eris conjunction of the last decant of Aries, and also with Saturn-Uranus and Uranus-Pluto. Chiron is located at 21 degrees of Pisces, in a close semi-sextile to Uranus/ Eris and in exact square to Saturn. This speaks to the prevailing societal panic, based on angst about the future, and is also redolent of those fears within ourselves individually that form an important part of our resistance to change. In this as with many other things, increased awareness is the key to healing and to moving beyond the internal issues that hold us back.

The increase in consciousness that is part and parcel of our response to difficult circumstances is indeed important, which is also the message of prominent Eris, a Feminine Warrior energy for soul purpose. Once we know of what our deep intention in actuality consists, we are empowered to attempt those changes in the social structure and within ourselves that truly support it.

I always like to close with the Sabian Symbol for the New Moon degree, which is the eighth degree (starting from 1) for Capricorn. This is, “Birds in the house, singing,” for which Marc Edmund Jones has, in a statement full of the imagery of the Eris archetype, prominent in his own chart, “This is a symbol of the descent of spirit or intelligence into every last ramification of everyday reality, and of one’s self-fulfillment as he [or she] is successful in shaping circumstances or precipitating events so that they become the ultimate and outward revelation of that higher vision by which he [or she] continues to be himself [or herself] at core.” May we, each of us, awake to that which we uniquely hold, deep inside, and rise to the occasion as it is presented to us by these troubled times. 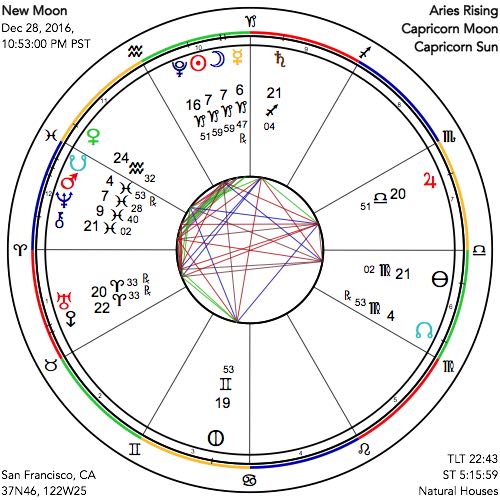