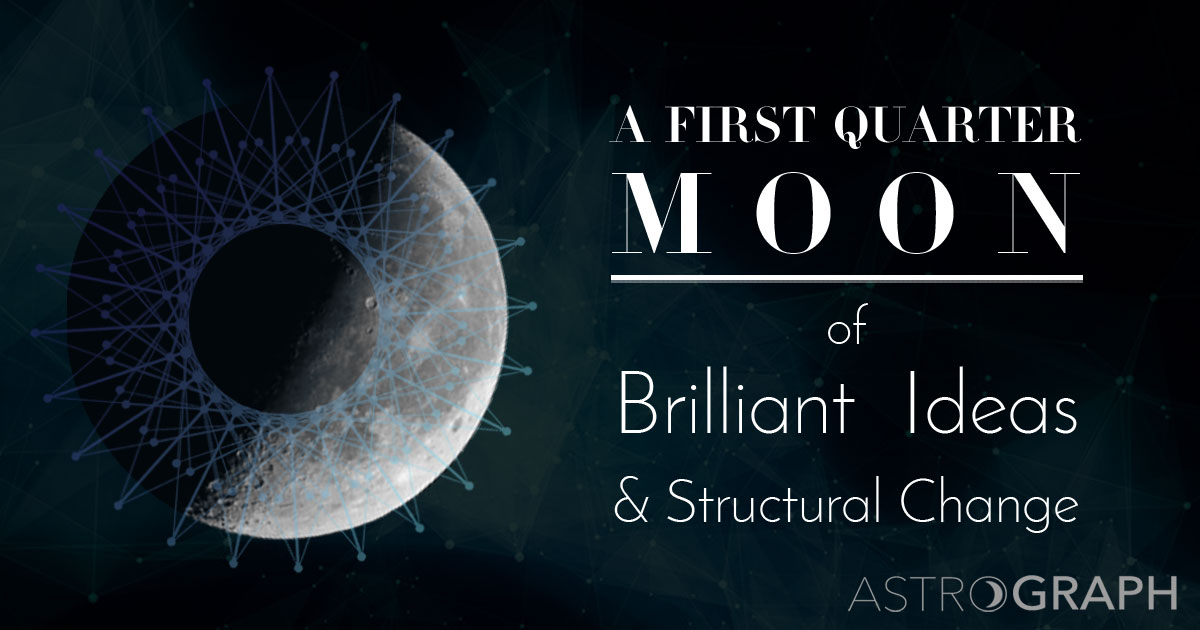 A First Quarter Moon of Brilliant Ideas and Structural Change

Posted on January 4, 2017 in Configurations |
By Henry Seltzer for ASTROGRAPH Horoscopes

Thursday’s First Quarter Moon is interesting in that it features the characteristic aspects of this difficult month, Jupiter-Uranus, Saturn-Uranus, and Uranus-Pluto. The reason that these aspects are highlighted now is, for one, their triggering by the Sun and Moon; plus the close aspects that both Jupiter and Saturn make to Uranus and to the Uranus/ Eris midpoint. Uranus remains all this winter and early spring within two degrees of Eris, the new planet beyond Pluto that represents, as my research has shown, taking a warrior stance for that which most deeply moves you. This is quite significant for our understanding of these times that we are living through because Eris greatly magnifies any planet that she touches, meaning that this is some important sense a season of Uranus. With Jupiter opposed, we find innovation, brilliant ideas like self-driving vehicles and cheap alternative energy sources, very much in the news, as well as thinking outside the box in attempting to find new solutions to old problems. You could say that it is currently all unknown, that we can expect almost anything from the unstable world situation that we find ourselves in the midst of. The Uranus emphasis also implies that the trine to Uranus from the limitation orientation of stodgy Saturn, exact to within a degree and a half in the timing of this first quarter configuration, so still quite close, implies a push-pull of liberal innovation together with conservative backlash, or perhaps the other way ‘round. In any case we have highlighted for us in the skies above, as well as in earthly affairs here below, the extreme polarities of these fractious times.

Pluto, too, is featured in this First Quarter Moon, since the Sun at the middle degree of Capricorn is in close forming conjunction with Pluto. Further, with both Uranus and Pluto so greatly emphasized, we have the strong re-emergence of Uranus-Pluto also to consider, representing radical and revolutionary changes for both individual and collective levels. This is the outer planet combination that was very active in the sixties, and that is the signature outer planet aspect of this current decade of the “turbulent teens.” We are seeing the signs of social evolution all around us, and, especially with Saturn involved, massive structural change, as well as the rather violent clash between those who push for needed improvements and those who opt for business as usual, even though in many cases this flies in the face of science and simple logic. Also for our individual lives, things are rapidly transforming, and we do well to recognize it. Bob Dylan’s pronouncements from the volatile sixties, when Uranus and Pluto were in conjunction, characterizing that famously revolutionary era, are just as relevant today, as for example when he famously declared:


Come mothers and fathers throughout the land
And don’t criticize what you can’t understand
Your sons and your daughters are beyond your command
Your old road is rapidly aging.
Please get out of the new one if you can’t lend your hand
For the times they are a’changing.

So, as I have said before, one mantra for these troubled times is that we decide where we ourselves stand, and once we do, act with decisive dedication to that compelling inner vision. This is a good way to get past that feeling of helplessness in the face of the large social forces shaping our destiny, just do something about it. The other message for each of us, individually, is that with Plutonian death and rebirth we might have to give something up, perhaps some factor of our lives that we cherish, or ingrained behavior patterns, in order to come through to the other side of whatever dilemma we are facing. This is simply a fact of natural law. Life itself implies constant change, and anything less is an illusion.

This is a tension-filled configuration. The nature of this lunar phase is that we encounter obstacles to our initial vision and either work through them or succumb. There is plenty of difficulty to go around, but when we have faith in ourselves and in our process, and take the time to get to know ourselves at the deeper layers of our being, amazing things are fully possible.

The Sabian Symbols for this First Quarter Moon have, as usual, something to contribute. They are, for the Sun, in the sixteenth degree of Capricorn, “Boys and girls in gymnasium suits,” and this symbol reminds us that we are all as children in the context of a mysterious universe that urges us onward and allows us to play with each other along the way as appropriate to our level of growth and development. Mac Edmund Jones has this to say: “a measure of practical experience as at root a matter of developing self-competency, and of life as a never-ending adjustment of ideals and motives to the everyday potentials of human society. The individual is required … to bring an aliveness of interest to everything in which he [or she] would participate.” For the Moon, in the same degree of Aries, we find “Nature spirits dancing in the setting sun,” bringing in the mystical side of life. Jones references, “the essentially friendly relationships which exist between man as a person and the totally impersonal forces of nature … implicit here is the dance of life as an unending rehearsal and exhibition of every special capacity of selfhood.” May we all be so blessed. 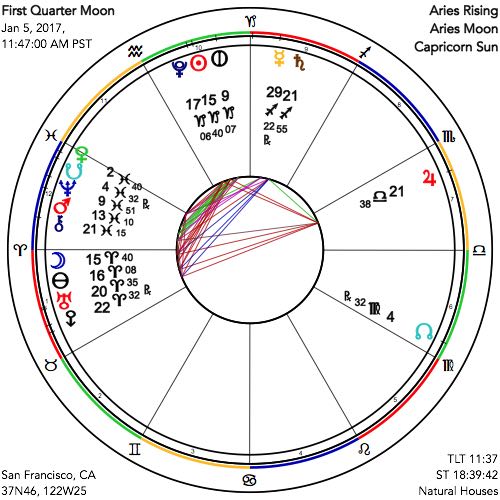 Chart for the First Quarter Moon on January 5, 2017