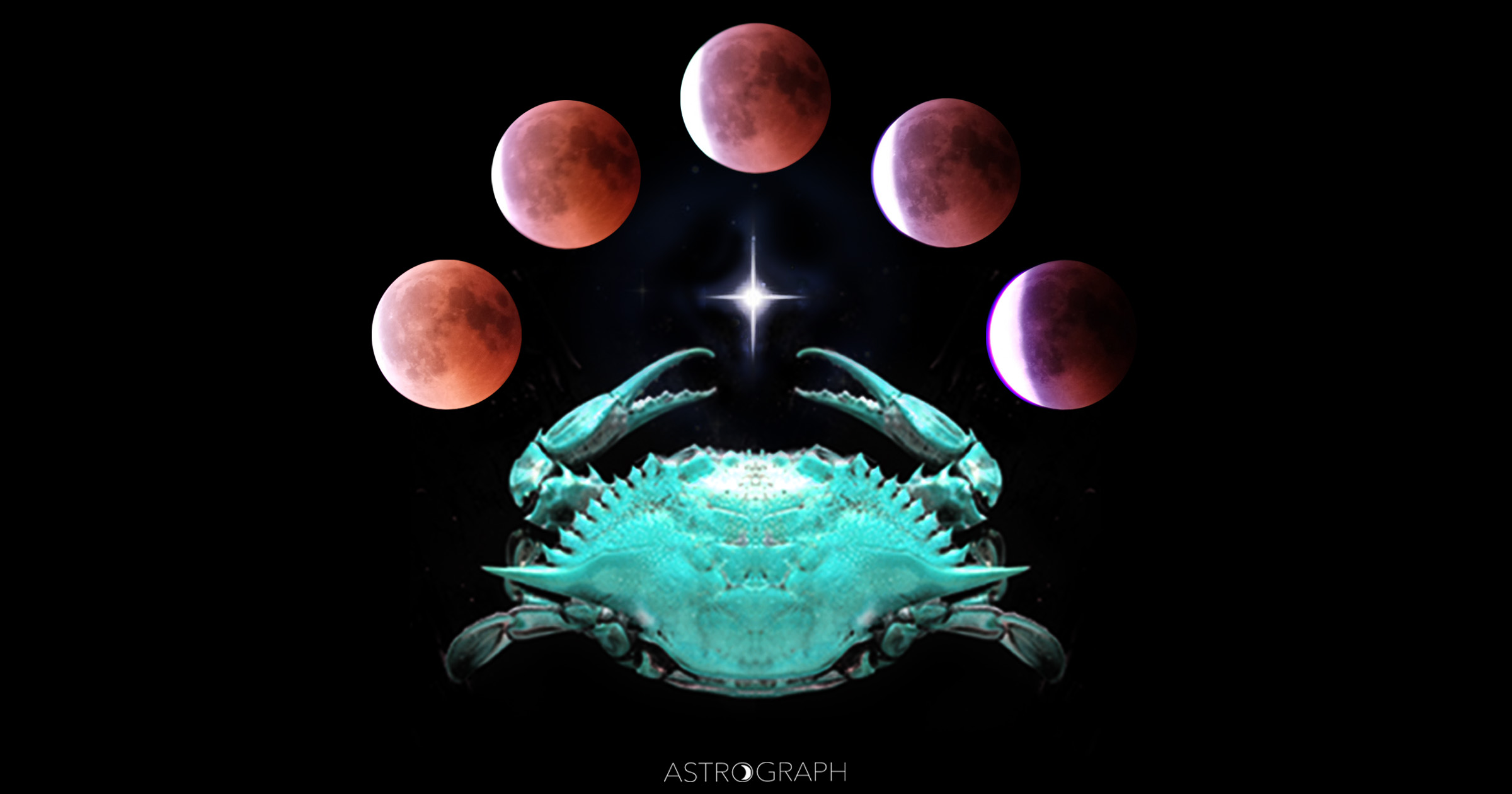 Posted on January 9, 2020 in Configurations |
By Henry Seltzer for ASTROGRAPH Horoscopes

Friday morning’s Full Moon eclipse in the sign of Cancer, early afternoon or evening for the east coast and Europe, is quite a powerful event, and is blessed with a Capricorn lineup of planets including Sun, Mercury, Saturn, and Pluto in conjunction. This collision of Sun and Mercury is partile and extremely close, meaning that Mercury is greatly emphasized, while Saturn-Pluto, in close conjunction and two degrees away from Sun- Mercury, is greatly significant as well, about to perfect two days later on January 12th. The highlighted presence of Mercury in this eclipse configuration indicates that greater consciousness is an important part of our evolutionary journey now. As far as Saturn-Pluto, these two powerhouse planets have been drawing closer together for the past six months, including a close parallel aspect between them that has been very nearly exact for all that time. This is therefore no sudden outbreak of Saturn power, but rather a culmination and peak energy of a long process that is far from over. Looking at Saturn-Pluto in its historical framework within the collective will be valuable, and timely, and more on that below. Looking at this storied astrological event from the standpoint of our own individual development, this conjunction brings great transformational power along with it, implying that whatever is outmoded and up for revision or removal must inevitably change. Our attitude to this is key: whether we go willingly, or kicking and screaming, we will pass through the gate of this climactic weekend and we will not be the same person that we were, on the other side of it.

Regarding the collective implications of Saturn-Pluto, we will want to reference noted astrologer, Richard Tarnas, and his seminal work from 2005, Cosmos and Psyche. In this monumental exposition of modern Western astrology, he delineates various outer planet combinations in action, including Saturn-Pluto, which have historically been associated with war, examples being WW I, the Cold War, Viet Nam, and 9-11. Saturn-Pluto is also associated with the conflict between man and nature, and as well what Tarnas calls “conservative empowerment.” The most recent conjunction took place in late 1982, when there was the conservative empowerment of the Reagan years with as well a great buildup of nuclear weaponry. At that time we had the Contra war in Nicaragua, attempting to take down the newly elected socialist Sandinista government there, and covertly supported by the Reagan administration. This theme of conservative empowerment is, quite tellingly, in accord with the current political climate here in the U.S., as evidenced by the solid holding of the line on the part of conservatives against progressive attempts at presidential impeachment and removal. The ongoing threat from a few days ago of war with Iran, is also consistent with this dire symbolism. At the time of this writing, on the 9th, it appears as though there is a potential for breakthrough – movement to avoid escalation to actual warfare – and this is greatly to the relief of a war-weary U.S. population. The notion of grace applying toward positive outcomes is reflected in the Full Moon eclipse configuration by other more optimistic factors, such as strong Jupiter.

In regard to the global situation as affecting the responses of the U.S. population, there is also the symbolism to consider of Chiron, the Wounded Healer. It is quite significant that the Sun and Moon eclipse degrees of 20 + Capricorn and Cancer make a partile T-square to U.S. Chiron, located at 20 + Aries in the revolutionary birth chart from July 4, 1776. This highlighted presence of U.S. Chiron reflects the upset and fears of this population with regard to the decades of war without letup that began with the invasions of Iraq and Afghanistan in the wake of 9-11, and continues into the present moment. Chiron in our current skies is also highlighted, its placement in early Aries being emphasized in the Christmas Day New Moon eclipse that began the current cycle, and also closely aspected in the current Cancer Full Moon eclipse by a semi-sextile from volatile Uranus, and an extremely close quintile from Sun and Mercury. Again, consciousness is key, whether dealing with the lead-up to potential war with Iran, or dealing with our own internal wounding that can have the negative effect of inhibiting progress toward evolutionary growth.

Eris is also active in this eclipse configuration, being square to Saturn-Pluto within one degree, and thus an important piece of the symbolism. The Eris archetype is one of a Feminine Warrior energy in support of soul intention. Her presence with Saturn-Pluto indicates that, going forward, we must individually aspire to articulate and act upon only what arises from deep within us, as our most sincere bottom-line values. The new Nature planet called Makemake, associated with environmental activism, is also currently highlighted. Located at 7 + degrees of Libra, he is parallel to Mercury, Saturn, the eclipse Sun, and also the eclipse Moon, the latter parallel being quite exact. Makemake is also closely squared by Jupiter and the lunar South Node, potentially a powerfully positive influence. This indicates that issues of the environment will become even more greatly activated over the first half of 2020, as is appropriate to the direness of our global situation. Again, consciousness is key.

All in all, the message of this very powerful Full Moon eclipse is quite clear; that it is high time to be up and doing, to serve the collective moment and as well our own most authentic selves by standing up for what it is that we most deeply believe. We have the example of this Cancer Moon, opposed to the Capricorn stellium, which in its ultimate essence is fundamentally nurturing. In view of this symbolism of nurture, we might reflect upon the words of Gerard Manley Hopkins, who in his 19th Century day, also saw the dire situation of the world around him, and yet, perhaps like us as well, also found cause for hope:

And for all this, nature is never spent;
There lives the dearest freshness deep down things;
And though the last lights off the black West went
Oh, morning, at the brown brink eastward, springs —
Because the Holy Ghost over the bent World broods
With warm breast and with Ah! bright wings. 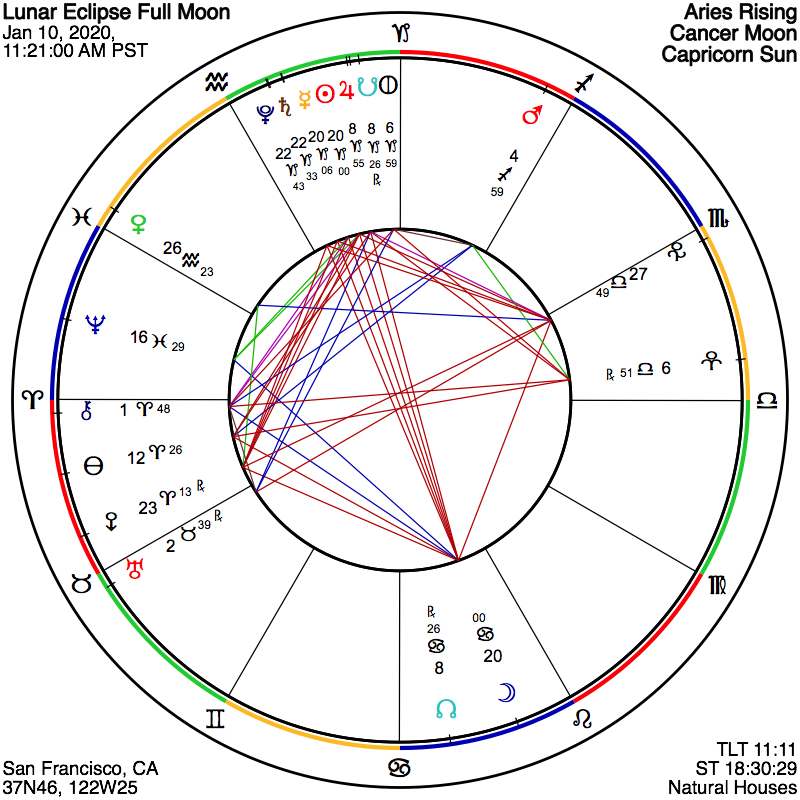