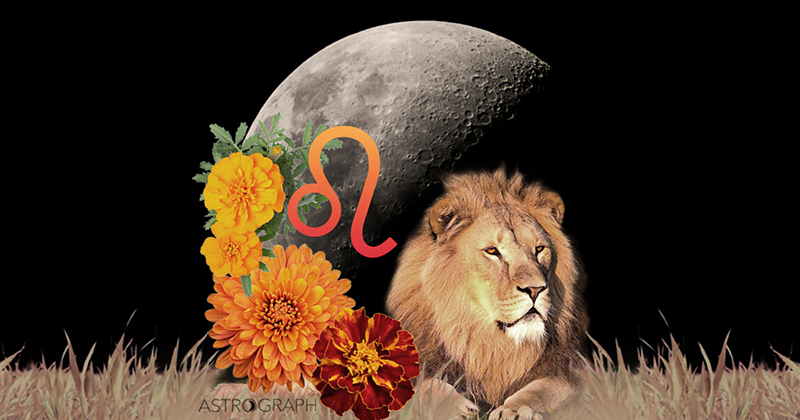 Posted on November 9, 2020 in Configurations |
By Henry Seltzer for ASTROGRAPH Horoscopes

Sunday morning’s Last Quarter Moon, taking place in the early hours of November 8th, midday for Europe and points east, represents the final major lunar phase of this strongly transformational cycle that was initiated by the New Moon configuration from mid-October. This cycle, punctuated as well by the October 31st Full Moon in precise conjunction with trickster Uranus – promising surprises and unusual revelations – still has a powerful kick as it winds down. This Last Quarter phase, termed by noted 20th century astrologer Dane Rudhyar as “crisis in consciousness,” represents a critical juncture of integration of what has transpired thus far in the developmental sequence from one New Moon to the next, with special emphasis on where lessons have been taken in, and resulting awareness gained, hopefully in the direction of more complete understanding. This shift in perspective is especially marked here in the US for practically the entire population, as they have closely watched the unfolding presidential election situation, and for worldwide observers of this political activity as well, plus in facing the local developments that they are a part of.

As we head into the last three weeks of November, and as we see the wheel turning for the process of American politics, what might we expect moving forward? For one thing, Covid is unlikely to be going away. I associate the Saturn-Pluto conjunction, still quite active this month, with the pandemic, and the indications are that it will get worse, not better, through the remainder of the month and year. The Saturn-Pluto conjunction, highlighted in late 2020, has now been joined by Jupiter in partile conjunction with Pluto, amping up the transformational effects of the Lord of Death and Rebirth.

On an individual level, also, this means that we must face up to where we need to transform in our own lives. Are we able to identify dysfunctional habitual patterns, or ways of being in the world, where we can, through increased awareness of their impact, summon up the courage of necessity and begin to let go? It becomes a matter of attitude and determination. Do we have the faith in the Universe, and in ourselves, to dream a better modus operandi into being? And then, of course, we need to act upon that inner vision.

Meanwhile, in this Last Quarter Moon configuration also, the Sun and Moon in square alignment trigger a close forming opposition between Venus in Libra opposed to a nearly stationary Mars in Aries, each in the sign of their own rulership. This is a quite potent arrangement of the astrological energies, and suggests relationship issues coming to the forefront. There is as well the concept of balance and compromise versus striking out entirely on one’s own. This is in fact, the way that we continue to transform, with the mirror that partners provide as one guiding light. Then, too, in the process of resolving relationship disputes, things could get a little hot. We might want to recognize that “you are never angry for the reason that you think you are,” and instead of the blame game, to take responsibility for what comes up from deep inside ourselves, likely stemming from undigested early experiences that were traumatic.

Because Neptune is emphasized as well now, there is an issue of what information do you trust, and how to mediate between ideal and actuality. The potential for fake news versus the actual facts of the matter is, sadly, still emphasized in the evolving zeitgeist.

The Sabian Symbols for this Last Quarter Moon have, as is usually the case, something to offer. They are, for the Sun, in the 17th (16 +) degree of Scorpio, the somewhat mysterious symbol, “A woman the father of her own child.” We do descend in our psychological makeup, as well as our very DNA, from our progenitors. Marc Edmund Jones, who caused these symbols to be created in the 1920’s, references, “the eternal conflict between the practical involvements and the ideal potentialities of human nature, (or) conscious individuality” He goes on to state, somewhat poetically, that “the recurrent virgin birth of self is its reconciliation with the world through their common center of reality.”

For the Moon, in the same degree of Leo, we find, “A nonvested church choir,” which I take it, because less formal, implies a more free-form coming together in singing; something comes directly from the individual as well as from the institution. Jones references, “each individual, (and his or her) participation in the broader community functions of life.” It is interesting to note how well-matched these two degree symbols – in square with one another – are. While it is true that we have our own individual talents and their expression, which come from deep inside ourselves, that contribution yet merges with collective values and ongoing societal evolution, so that both of these factors are ever-present in whatever it is we do. May we move forward with our personal evolution, forging new and spiritually consistent ground, while simultaneously enabling our society to enter into new territory that has been long in coming, bringing us closer to our ideals for an interconnected and more peaceful world. 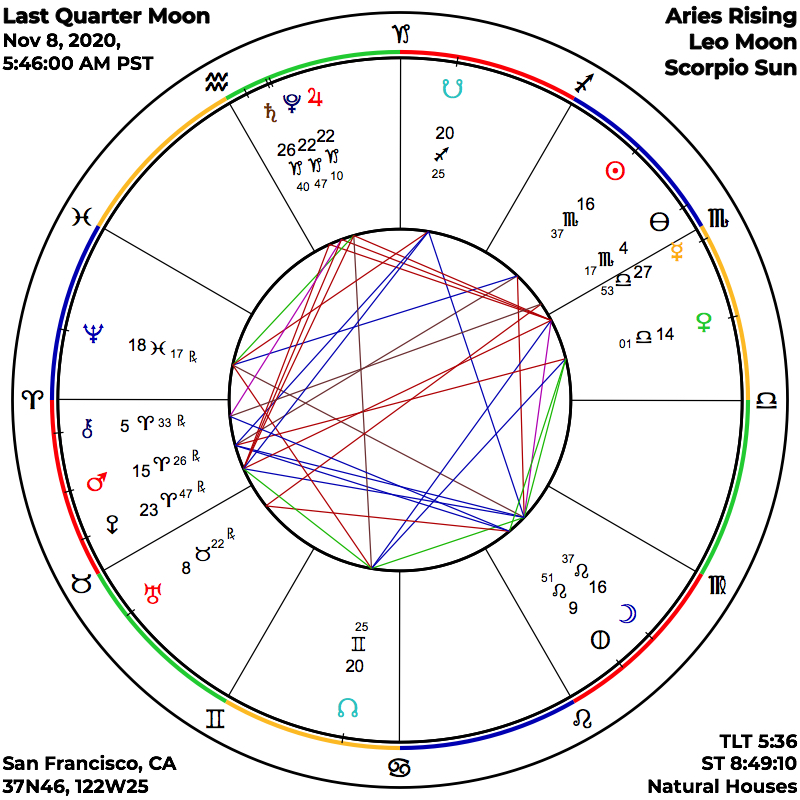 Chart for the Last Quarter Moon on November 8, 2020