Get 25% Off TimePassages Standard Edition

And help us plant trees for earth day! 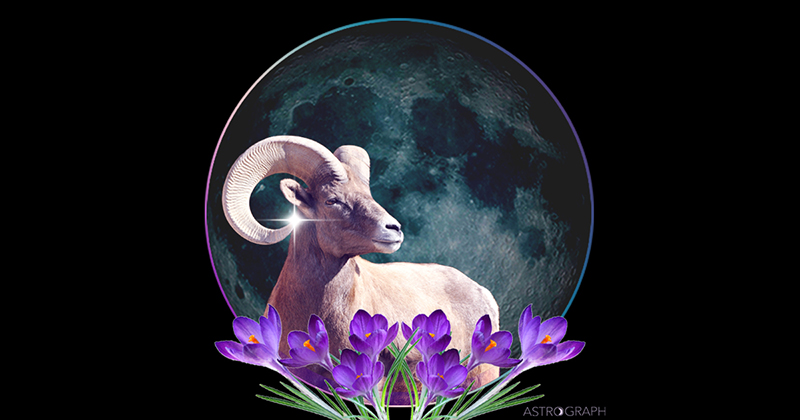 A New Moon of Dedication to Inner Vision

Posted on April 8, 2021 in Configurations |
By Henry Seltzer for ASTROGRAPH Horoscopes

Sunday evening’s New Moon in Aries, taking place at 7:30 p.m. on the West Coast and later in the evening for points east, is a slam bang of a potent lunation, with Eris at 24 degrees of Aries sandwiched directly between the New Moon and Venus, all within four degrees of late Aries.

This implies a great deal of inherent determination for your deepest and most sincere values, particularly in the sector of your chart where these degrees of Aries reside. Relationship, art, and aesthetics represent areas of additional intensity, and this is especially true to the extent that you are ready to take a further step into what you might come to understand as your life purpose, your mission statement for this current incarnation.

Additionally, this New Moon features a grand trine in air signs between Mars in Gemini, Jupiter in Aquarius, and the new Nature planet, Haumea, in Libra. This symbolizes loads of joyful inquiring mind energy toward issues of Nature and of adherence to natural law. Transformational Pluto is also emphasized in the New Moon configuration, stationing this month in Capricorn and squared by both Eris and Haumea.

This is a rather remarkable Aries line-up that we have going here. Sun, Moon, Eris, and Venus are joined as well by Mercury and Chiron, the Wounded Healer. The latter, at 9 degrees of Aries, is still opposed by Makemake, another of these new planets beyond Pluto, connected to Nature and to Earth activism. Together they were highlighted in their opposition at the recent March 28th Libra Full Moon that also represented a somewhat dramatic take on relationships and on relationship wounds.

In this New Moon configuration, in addition to the Venus emphasis, with Eris, there is also Venus in partile square with Pluto, as well as a Mars-Pluto inconjunct, both aspects triggered by the New Moon. This implies that our relationships are on the line and up for big changes. Tempers could flare, giving an opportunity for self-examination and for further delving into our hidden blind spots. We win when we can avoid the blame game and instead look inside ourselves for important answers. Personal developmental evolution remains a hot topic for the current cycle.

The Sabian symbol for this New Moon degree of 22 Aries, the 23rd, is Symbol 23, “A woman in pastel colors carrying a heavy and valuable, but veiled, load.” This symbol seems to reference that part of the human experience that, while richly important, is also hidden from conscious view; this is knowledge that is “occult” or esoteric, and is also sometimes represented as ancient wisdom that has been retained down through to the modern age, but only in secret places with certain initiations, therefore difficult to access. This can also be seen as part of the Collective Unconscious which Jung described as not always clearly understood or even recognized by the conscious mind. The pastel shade of the woman’s clothing could refer to centers of higher consciousness within the human system.

When we reflect on this symbol, we can comprehend our responsibility to aspire to the most authentic version of ourselves that we can muster. This too is not easily seen, and yet vitally important to recognize.

This degree symbol accords well with the radical symbolism of the quadruple conjunction that we see in this New Moon, of Sun, Moon, Eris, and Venus. This is a magical time of great import; now and for the next thirty days. It is also one of great witnessing and discernment, as we can come to that. It is a time when it is possible to pull many a rabbit out of many a hat, and yet also one in which, if we are not paying close attention, all these benefits could swim away on the rising tide. We all have the responsibility, in addition to staying vigilant, of acting on our deepest principles in whatever way we can. In this, may we find our true salvation in these difficult times of great societal falling apart, and of potentially coming together. 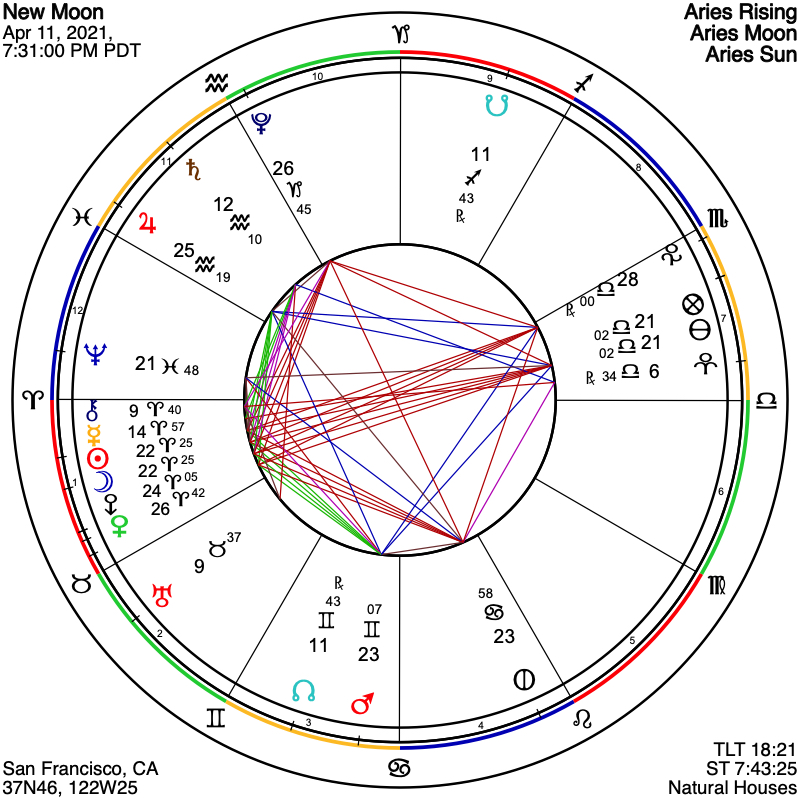 The Astrology of April 2021 The Sun is in Taurus

The First Quarter Moon is in Leo: All day Next Mercury Retrograde
May 29 - Jun 22 Other Announcements
Last updated April 21, 2021