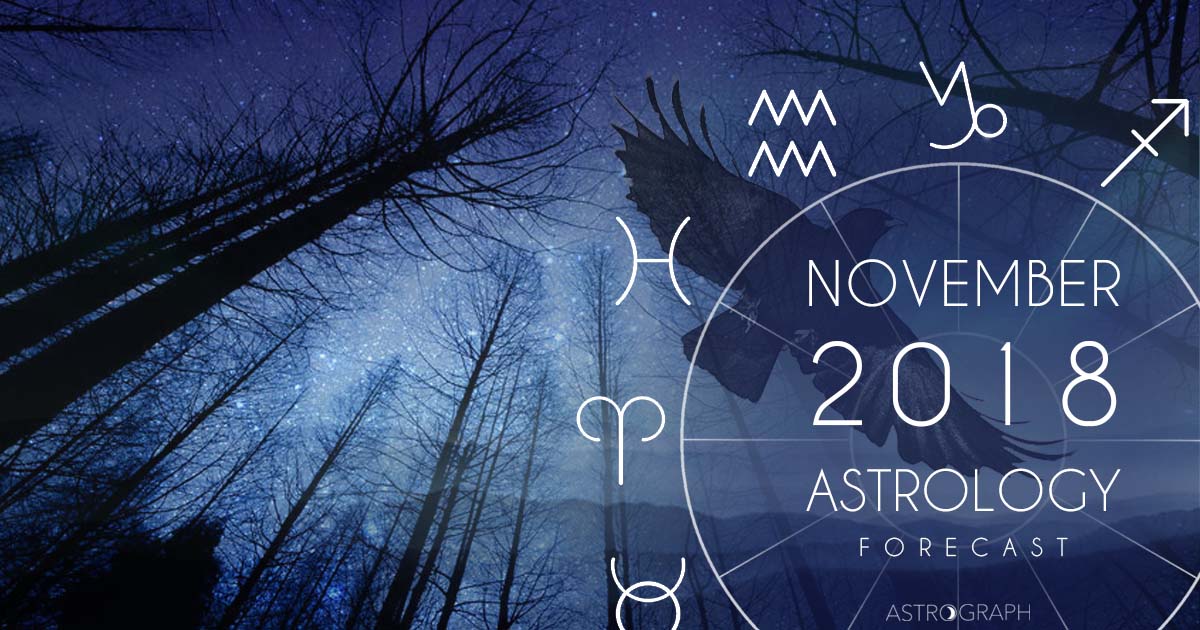 A November Month of Calls to Reflection and Studied Action

Posted on October 31, 2018 in Overviews |
By Henry Seltzer for ASTROGRAPH Horoscopes

The astrology of November features Mercury, Venus, Mars, Uranus, Chiron, Eris and the new planet Haumea. The retrograde of Venus continues this month, although in a changed venue of late Libra, as she makes her Heliacal Rise in that sign on November 1st. This retrograde has already proven quite significant, and will change in its characteristics once more when Venus stations to direct motion on Saturday, November 17th. At that time, and from the New Moon of November 7th on, the Eris/Uranus midpoint opposes retrograde Venus almost exactly. More about this Venus retrograde, taking place throughout the month of November and beyond, both below, and in a separate article to be published soon on the Astrograph site. Meanwhile the same day that Venus returns to direct or forward motion, Mercury begins its final retrograde cycle of the year! Lasting about three weeks, to the end of the first week of December, and followed by the retrograde “shadow” period, this Mercury Retrograde begins with Mercury in partile or same-degree square to numinous and otherworldly Neptune, bringing at that timing an influence that is spiritual and also somewhat confusing or even deceptive. The concept of “fake news” might become therefore an even more normalized factor of modern life by mid-month. Meanwhile, Mars remains in Aquarius, the sign of his recent retrograde, through the first half of the month, at the New Moon of the 7th precisely trine to retrograde Venus, finally moving into softer Pisces on November 15th. This months-long sojourn of Mars in Aquarius has both called into question, and then finally strengthened, the concept of activism in the larger sphere represented by the society that surrounds and sustains us.

In this regard it is quite interesting that Uranus, having retrograded into the last degree of Aries, is therefore along with Eris in close opposition to retrograde Venus as she stations. At the New Moon, as Venus prepares to station, as mentioned above, Eris and Uranus in their six-degree conjunction are further emphasized, by their midpoint exactly opposing Venus together with the new nature planet, Haumea, at the 25- and 26-degree mark of Libra. Venus in fact remains within one degree of conjunction with Haumea during the final ten days of her backward motion, and then through to the end of the Thanksgiving weekend, or about three weeks in all. This is a long time for Venus to remain in a one-degree conjunction with an outer planet! We might therefore learn more about this intriguing new planetary archetype as the month develops. Haumea seems to fully represent an earth-goddess energy of protean flexibility for enabling cultural change, particularly with regard to profound connection to Nature and to the special pathway to spirituality that the involvement with natural settings can represent. The appreciation of our earthly home is thus likely to become an even more major theme in the current zeitgeist as this monthly cycle continues to unfold.

Because Eris is emphasized this month, representing a Feminine Warrior energy for soul intention, it is also likely that we shall see a concerted effort now on the part of everyone to stand up and be counted for whatever it is in which they most deeply believe. Combined with Uranus, this harkens back to the summer of 2016 through to the spring of 2017, when they had their two exact hits of conjunction in Aries. This combination is quite powerful, bringing a maverick and a “try anything” attitude to bear as we move forward, and also looks ahead to the massively transformative planetary cycles of 2020, when Saturn, Jupiter and Pluto combine in a triple conjunction by November of that year, with Pluto at 23 degrees of Capricorn in square to Eris in Aries. In spite of the confusing Mercury Retrograde that is also current, this month therefore represents a call to action.

Chiron, the Wounded Healer, is also featured in this month’s configurations, being semi-sextile Uranus all month long and aspected by the Sun and Moon in the Full Moon of November 22nd. There is a degree of angst in the current emotional landscape of the culture we live in, as well as a species of future shock at the rapid changes that global society is going through. We may also now be more aware than ever of our own internal wounding, and that something can be dome to move through this residue of early trauma, by simply paying attention to it.

With Mercury retrograding through Sagittarius after mid-month, our beliefs in general are subject to review and reconsideration. That the Sun in the Thanksgiving Day Full Moon closely conjuncts Jupiter in Sagittarius makes for a chime with simple optimism. Perhaps we can find it in our collective heart to forgive others who differ in important ways from our own individual point of view. At least, that can be our fervent hope, as we enter into another fervently fought political season here in the United States.