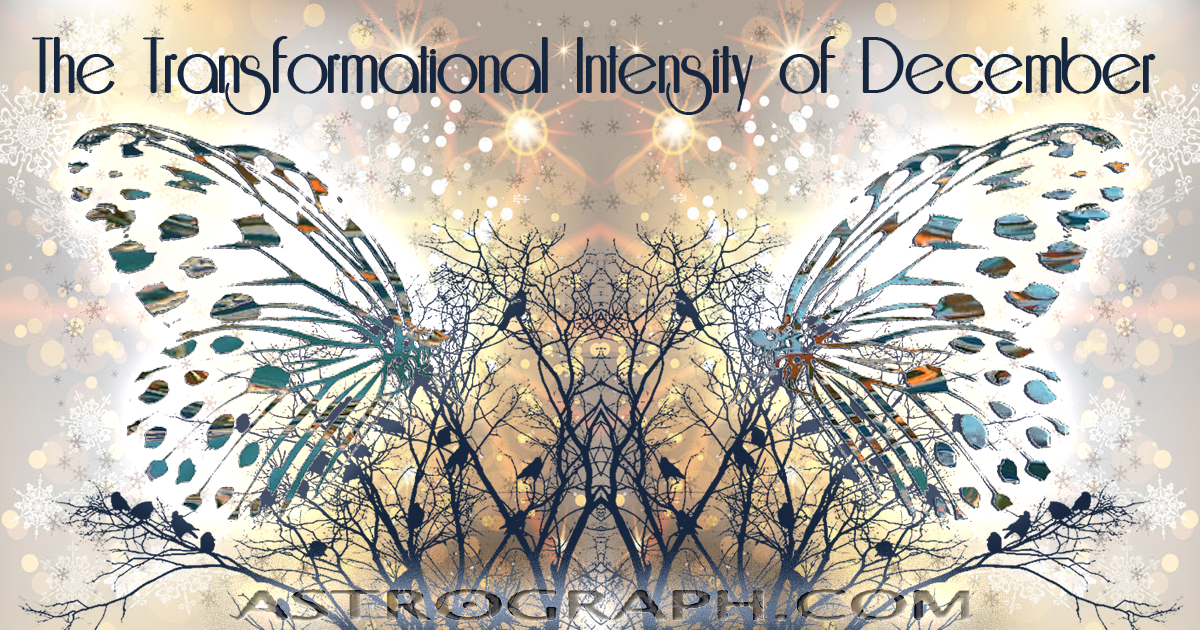 The Transformational Intensity of December

Posted on December 1, 2014 in Overviews |
By Henry Seltzer for ASTROGRAPH Horoscopes

The astrology of December features Mars, Jupiter, Uranus, Neptune and Pluto, along with Eris. Mars and the other personal planets are changing signs this month, with Mars entering Aquarius early, just two days before the powerful Full Moon configuration of Saturday, December 6th, that highlights Uranus and Pluto in square, now less than half of a degree away and therefore quite active. This is one peak of their current thrust for massive and revolutionary change. At this time as well, Jupiter and Venus conspire to make a grand trine in Fire signs with the new planet Eris, past Pluto, that is proving to be potent in natal charts and in transit, representing a spiritual warrior for soul purpose. Therefore this month, we are celebrating this newly discovered outer planet archetype that seems to symbolize an implacable energy for embracing deep soul intention. What we can expect is a greater reliance on ourselves, and for making a stand for what, at the deepest levels of our being, we truly believe.

This energy for soul purpose combines with Uranus and Pluto, which are drawing near to the penultimate instance of their square alignment that will go down in the astrological records as the defining configuration of this decade. The trickster energy of Uranus in Aries brings surprises, as well as great intuitional awareness along with him, in addition to the unexpected event that can lead to an entirely new insight. The massively transforming effects of Pluto are also well-known for their compelling power of life purpose in motion. This month is therefore a time of great intensity and potential progress along the arc of our intended development. We are, all of us, leaving some part of the past behind us as we sail through a transformational month. When we have more or less prepared for the deep changes that accompany the revolutionary effect of Uranus and Pluto in exact collision, an aspect that perfects mid-month, we are better off than when we resist this force for radical change.

The Sagittarius New Moon that originated this current lunation cycle took place on November 22nd, and this configuration itself stimulated the positions of Uranus and Pluto by sesquiquadrate and semi-square, so that all month long we have a strong dose of personal and societal evolution. The third major outer planet, Neptune, brings an otherworldly and idealistic point of view to the place he currently resides, in early Pisces, and is a factor greatly emphasized this month as well, being squared by the New Moon. Then, in another remarkable configuration, Jupiter is closely trine the new planet Eris until the end of December, because Jupiter itself is getting ready to station on December 8th, remaining in the same degree all month. Since Eris herself moves so slowly, also staying in her spot, the 23rd degree of Aries, for the entire month of December, we have a partile or extra-potent trine between them from the timing of the Sagittarius New Moon onward. This brings a strong hit of Eris to consciousness, especially in the mid-month time frame when the Sun in Sagittarius completes a grand trine with Jupiter and Eris. We will therefore be more fully tuned to inner awareness, and able to achieve a much better understanding of our deep soul intention, as a result of this quite powerful cycle that ends with the Winter Solstice and Capricorn New Moon of Sunday, December 21st.

The Winter Solstice itself is extraordinarily powerful this year, coinciding with the New Moon that takes place only a few minutes of a degree into the sign of Capricorn. This is always a very special time and this month even more so, as we look ahead to the turning of the year. Because Uranus and Pluto remain within one degree of exact through December, and beyond, we have before us an extremely powerful springtime leading up to their final exact hit in mid-March of 2015.