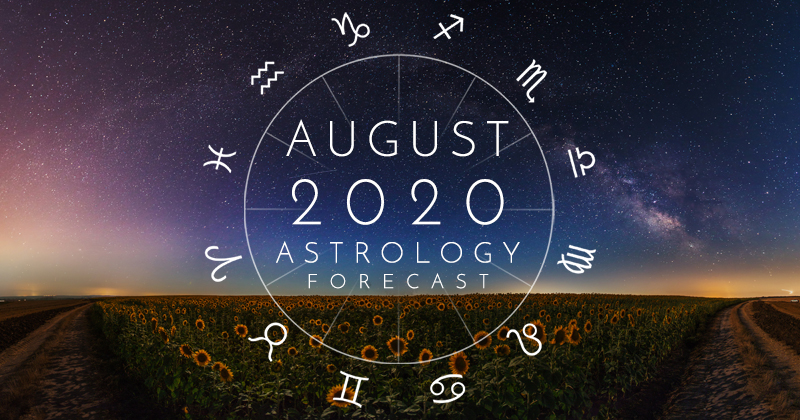 An August Month of Further Transformation and Staying the Course

Posted on August 1, 2020 in Overviews |
By Henry Seltzer for ASTROGRAPH Horoscopes

This second month of deep summer brings something of a repetition of the previous month, as far as the major astrological configurations are concerned. Pluto and Saturn are each quite powerfully configured in the July 20th New Moon that precedes the current month, while the separation of Saturn and Pluto is slowly dropping as Saturn continues its current retrograde motion, to four degrees by the end of August, then to three by mid-September, so that Saturn and Pluto are becoming more active as well in combination. Saturn with Pluto has been the key outer planet configuration of this 2020 Covid season, beginning with their exact alignment on January 10th, as highlighted by the nearby lunar eclipse. The difficult implication from their current prominence therefore is that, in spite of renewed efforts to suppress it, this deadly virus infection is likely getting worse rather than better. This applies most directly to the U.S., where it has never really gotten under control, and additionally applies to other parts of the world also, where we may well see a resurgence.

What is the potential impact and effect on our individual lives in this season of disease and economic disaster? For one thing, there is no simple escape route from this virulent illness, not until after the end of the year, and perhaps not until the spring and summer of 2021. The ongoing social distancing requirement and cultural rearrangement presents a challenge to each one of us individually, and we must, each one of us individually, rise to meet it, keeping ourselves and others safe. More importantly, this massive social and economic slowdown has given us a chance to get off the treadmill, to stop for a minute and truly self-examine, preparing the way for necessary changes that we might begin to make in our personal lives. A further challenge of the pandemic therefore raises the question of whether we are willing to give up habitual and yet dysfunctional parts of ourselves. Is there a way that we can summon the courage to make needed changes, and to let go of behaviors that no longer serve us? That is the looming question of these Covid times.

The August 3rd Full Moon in Aquarius, that begins the first working week of the month, is quite a potent lunation. Neptune is strongly configured, being sextiled by Jupiter and aspected by the Sun in Leo, as well as Haumea in Libra, at the moment of the Full Moon. Imagination is stimulated, but discrimination must be employed. The Leo-Aquarius axis is highlighted, which indicates that one’s individual contribution must be considered as applying to the surrounding collective, helping to advance the cultural evolution that is the ultimate point and substance of what we are all going through as we individually transform.

Uranus, too, is strongly configured in August, being closely squared by the August 3rd Full Moon, and also stations to retrograde motion mid-month. This, as always with Uranus, indicates surprising realizations along with unexpected events. With Taurus involved, these could be related to earth issues, which subject matter is also emphasized by the close square between Saturn in Capricorn and new planet Haumea, representing Nature, and natural law becoming more widely recognized.

The Uranus emphasis is also giving us a renewed taste of Uranus-Pluto, in the aftermath of their powerful opening square alignment of this past decade, that followed and amplified the symbolism of their potent conjunction over fifty years ago, the hallmark of the volatile 1960s. Pluto is emphasized as he draws closer to Saturn all month, getting even closer by the end of the year, while Uranus is moving quite slowly all month long, and is aspected as well by Venus in the timing of the powerful August 18th Leo New Moon. We are all no doubt transforming mightily, each in our own way, and on our own separate course, as we and our society continue to evolve. A better world awaits us, but the birth will not come easily, or passively. It will instead take everything we’ve got.