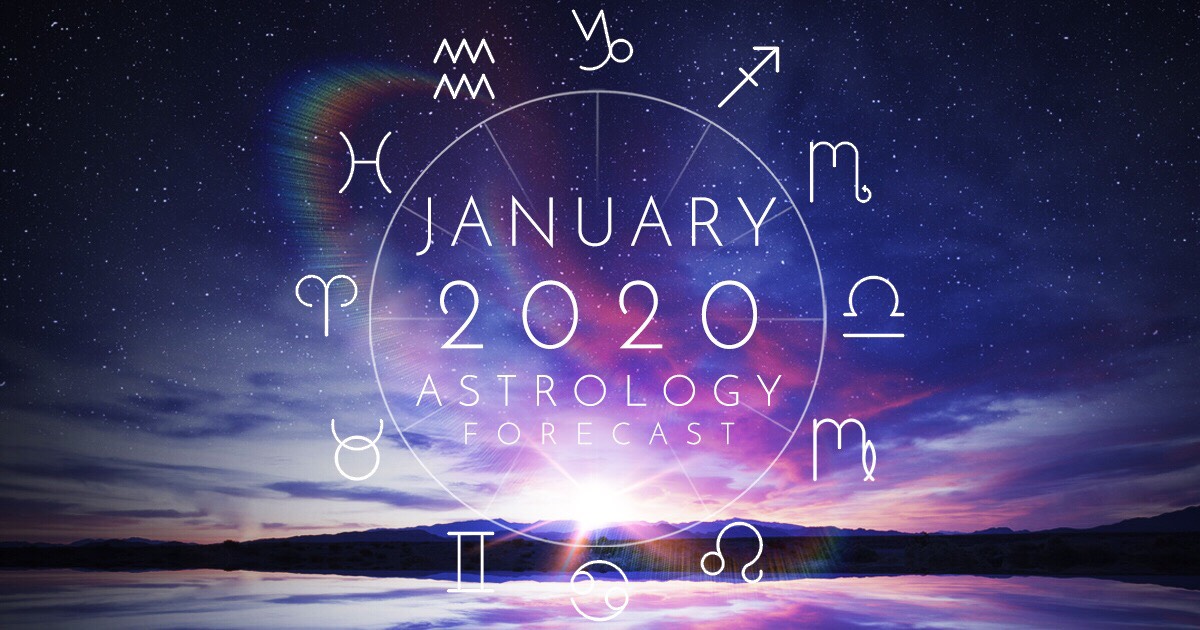 A January Month of Tricks and Massive Structural Transformation

Posted on January 1, 2020 in Overviews |
By Henry Seltzer for ASTROGRAPH Horoscopes

The Astrology of January is quite intense, featuring a lunar eclipse as well as Jupiter, Saturn, Chiron, Uranus, Pluto, and Eris. All these powerful planetary archetypes have come together for January of 2020 either as part of a large Capricorn stellium that is active right from the very beginning of the month, in alignment with the current lunations, or, in the case of Eris, in square with Saturn-Pluto. Of course, the biggest headline news for the month is the perfection of the Saturn-Pluto conjunction which has been forming for many weeks, and which symbolizes an empowerment of the limitations of Saturn as well as the massive structural transformations implied by a greatly emphasized Pluto in combination, affecting us all both individually and collectively. This anticipated event is exact on January 12th, and active for the days surrounding this moment of time, beginning with the January 10th Cancer Full Moon eclipse at 20 + degrees of Cancer-Capricorn. This is a mere two degrees from the 22-degree mark of Saturn-Pluto. Because we remain in the midst of the Capricorn lunation cycle begun late on Christmas Day with the solar eclipse and New Moon that took place early in the sign, conjunct Jupiter and trine Uranus in Taurus, that trickster energy of surprise and brilliant observation is very much in the picture of this month’s energy as well. Powerful Uranus, that wants freedom of expression above all else, and is always more than willing to jump the tracks of existing habit patterns, must contend, in the timing of the mid-month lunar eclipse, with an extra-potent dose of Saturn, that wants above all to put a clamp on things, holding them down from too experimental an approach. We see this being acted out in the current zeitgeist by the powerfully progressive voices being raised running up against conservative forces absolutely holding the line. The lunar eclipse also has Mercury appearing in partile or same-degree conjunction with the eclipse Sun, further strengthening its impact. With Mercury so closely involved, this brings the important issue of consciousness of what we are up to directly to the table.

Chiron, the Wounded Healer, is also emphasized in this month’s astrological configurations. Chiron was squared by the New Moon lunation of December 25th, a solar eclipse, that began this current 30-day cycle, and will be aspected as well by the January 24th New Moon. The potent January 10th lunar eclipse in Cancer highlights Chiron also, by means of a close quintile from Sun and Mercury. Perched at very nearly the beginning degree of Aries, like Uranus in his occupancy of a similar degree of Taurus, Chiron thus participates in an ongoing significant semi-sextile with the cosmic Trickster. We will be intuitionally aware of our own inner wounding and coming to new realizations concerning the way this interior factor, most times the residue from early childhood trauma, continues to influence our lives and our choices. We must pause here to note that the objective facts in this matter of our inner wounding are few. We are what we think we are. Similarly, when that subjective attitude changes, we change. Becoming aware of what is going on in the dark places within you, where inner wounding has been buried away, is the first and most significant step in beginning to move beyond these sometimes quite debilitating complexes deep inside. After recognition comes compassion for the hurt child that remains within us, and an ability to comfort these walled off parts of ourselves. This activity is extremely important as we move forward in the surge of evolutionary development that is presaged by strong Pluto for this new month, year, and decade.

Prominent Uranus is also quite an important factor in January’s astrology, as indicated above. In addition to being aspected by the December 25th New Moon eclipse, Uranus is squared by the Sun and Moon in the January 24th New Moon, and stations to direct motion on the same day as the January 10th Full Moon eclipse, so we currently have a lot of his trickster energy in the picture! This month also represents the swan song of the Uranus-Pluto square that was the hallmark of the previous decade, as the 10-degree orb of their interaction becomes transcended. This world transit, the next stage of the Uranus-Pluto conjunction that defined the volatile 1960s, represents testing the validity of new ways of thinking and being in the world, attempting to determine whether they are viable as mainstream elements. With climate change bearing down upon us like an express train, we will have to embody a more positive model of social interaction and veneration for Nature if we are to survive, so the stakes are extremely high right now.

Finally, and also directly relating to the above, we have Eris, Feminine Warrior in support of soul intention, quite prominently involved in the powerful Saturn-Pluto square that perfects mid-month. Saturn and Pluto are at 22 + of Capricorn, while Eris currently occupies the 23-degree mark of Aries, a nearly perfect square alignment. This energy is all about digging down deep inside ourselves in order to determine our most sincere values, and then proceeding with courage to act upon these, and only these, as we take ourselves forward into our next evolutionary stage. In order to do this, we must recognize only that which we incontrovertibly believe, independent of consensus thought or the reactivity of others. Greta Thunberg is a perfect example of this, of course. Blessed with powerful Eris in her own natal chart, she has electrified environmentalists all over the world with her dedication to her own inner truth, to the absolute exclusion of what others might think, or social convention might dictate. If we can follow her example, each in our own individual way, we will have come a long way toward tackling the extreme problems we and the earth face as a society and as Nature symbiosis. Noted 20th century anthropologist Margaret Mead, herself with Eris closely square the Sun, perhaps articulated this principle best when she said, “Never doubt that a small group of thoughtful, committed citizens can change the world; indeed, it's the only thing that ever has.”