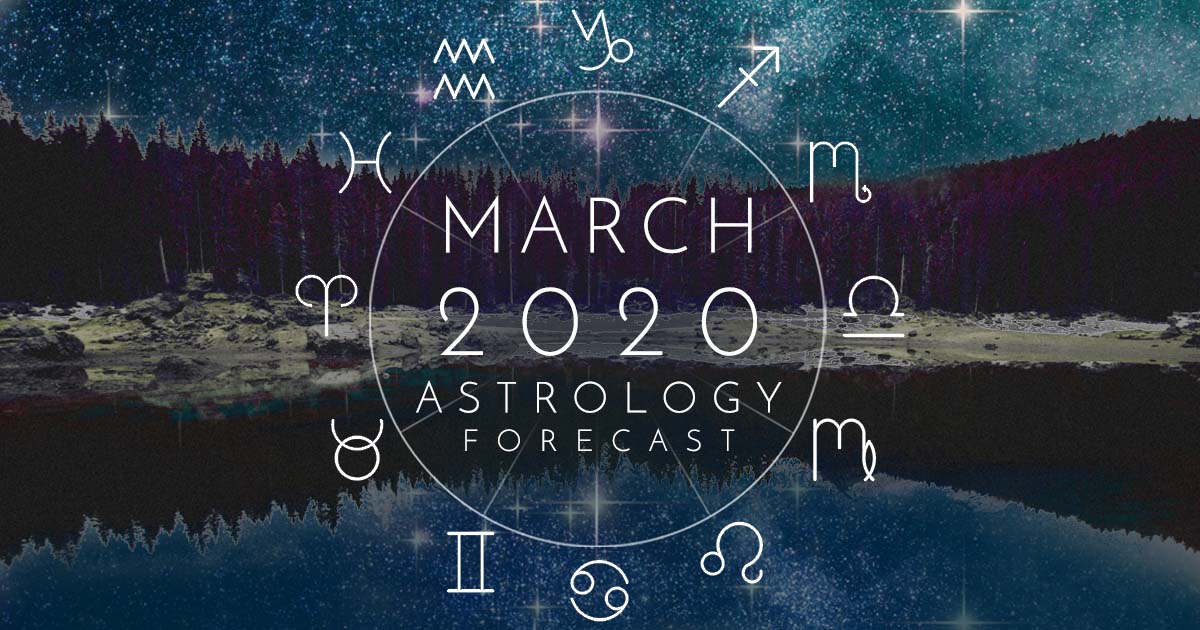 A March Month of Uncertainty, Introspection, and Spiritual Reflection

Posted on February 28, 2020 in Overviews |
By Henry Seltzer for ASTROGRAPH Horoscopes

The Astrology of March is powerful and essentially introspective and self-reflective, given the ongoing retrograde of Mercury. The Virgo Full Moon of March 9th is particularly interesting in this regard, because the Sun conjuncts Neptune, just as Venus conjuncts Uranus, and Mercury stations direct. It is important to note that Mercury’s station in the late degrees of Aquarius does not signal the total end of the Mercury Retrograde, but rather is one peak element of that period of time. Mercury recovers its lost zodiacal longitude for the next 20, days making for an unusually long total period. There is also a triple conjunction in Capricorn that emerges toward the end of the month, between Mars, Pluto and Jupiter, so be prepared to fasten your seatbelt when that comes around, coincident with the Aries New Moon of March 24th.

In the Pisces New Moon than initiated the current March cycle, also, Mars was in close trine to Uranus, with the New Moon degree at the exact midpoint, making a sextile to both ends of the trine. This indicates a particularly strong presence of Uranus, meaning that we do well to “expect the unexexpected” during this entire month. Neptune was also highlighted. Then, in the Virgo Full Moon of March 9th, the conjunction of the Sun and Neptune, along with Venus conjunct Uranus, additionally indicates an essentially spiritual thrust to these uncertain days. We all must in some way acknowledge that we are living in a Spiritual world, as the astrological patterning gives powerful presence to.

The one-sidedness of planetary pattern for these New Moon configurations is also significant. In the Pisces New Moon that began the current lunar cycle, and in the Aries New Moon of March 24th, all the planets occupy a mere 120 degrees of the circle, a planetary pattern called a “cluster” that has a concentration of energy in a particular part of the entire Zodiac, a mere one third! In the Pisces New Moon, the trine between Mars in Capricorn and Uranus in Taurus contains all the other planets between them, while in the Aries New Moon the trine is between Jupiter and Venus. This indicates a degree of focus on specific areas of life, depending on where Capricorn to Taurus falls, different for each sign’s solar chart, and also for each individual chart as well. In the chart of the USA, based on the Sagittarius rising or Sibley chart, this falls between the second and the fifth houses, indicating that in some ways, over these two months of March and April, America is redefining itself. At the Pisces New Moon, the conjunction of Saturn in late Capricorn to US Pluto is another indication of this national transformation. The other thing to recognize in the mundane astrology of these powerful lunations – and including the Taurus New Moon of April 22nd – is that they each strongly feature Uranus in Taurus, signalling unexpected instability, in close sextile with US Venus, its Midheaven ruler. In view of the recent emergence of the worldwide coronavirus threat, potentially endangering the nation’s health and the global economy, this takes on a potentially grim outlook.

Finally, we will once again want to note the elevated presence of the new Nature-oriented “dwarf” planets of Haumea and Makemake in these spring skies. Saturn in the Pisces New Moon closely squares Haumea, as does the triple conjunction of Jupiter, Mars, and Pluto in the March 24th Aries New Moon configuration, while the New Moon itself opposes Makemake, speaking to earth issues and, more specifically, to climate change activism. Eris continues in potent square to the Capricorn planets, signalling that each one of us must at this time stand up and be counted, or else silently go under the massive tides of history, turning.