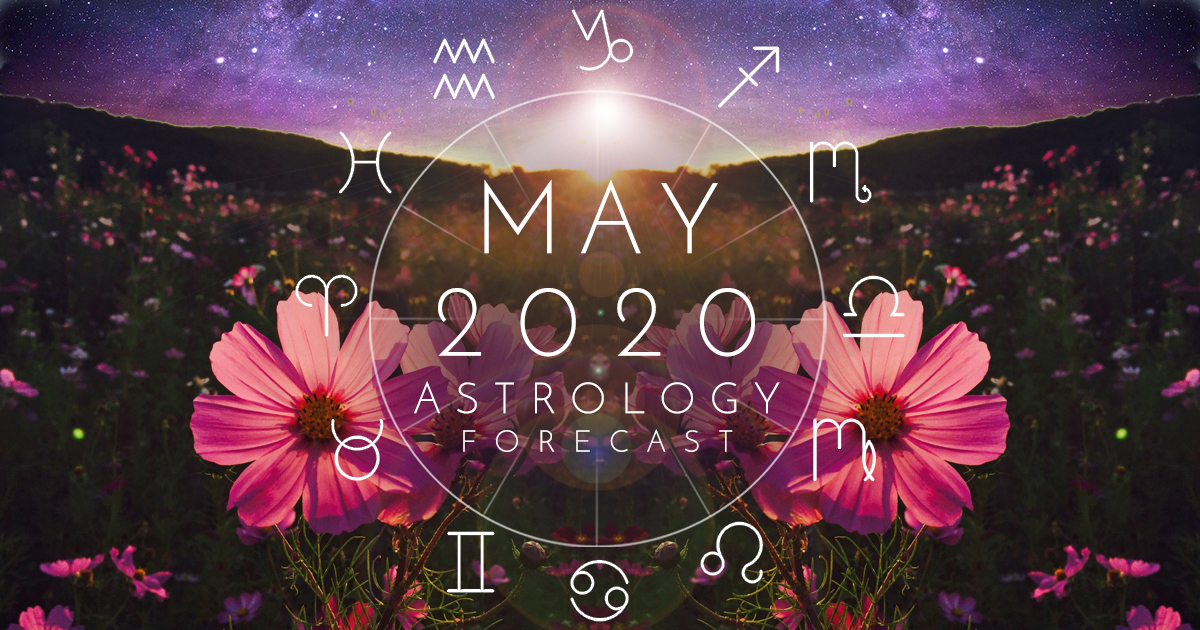 A May Month of Transformation, Unexpected Insight, and Spiritual Enlightenment

Posted on April 30, 2020 in Overviews |
By Henry Seltzer for ASTROGRAPH Horoscopes

This month of May has a lot going on, from an emphasis on trickster Uranus, in Taurus, to a T-square involving a powerful placement of transformative Pluto, to a Venus retrograde period that is initiated after the first ten days of the month, and including a series of retrogrades and planetary ingresses that occur mid-month leading up to a quite potent Last Quarter Moon in Aquarius on Thursday, May 14th! This is not to mention the Gemini New Moon of May 22nd that trines Saturn in Aquarius and features Venus and Mercury together, squaring Neptune in Pisces. All the outer planets are therefore highlighted in this dynamic month. The square of Venus to Neptune is particularly significant because that interesting aspect lasts practically all month long, being true to within a degree as the month begins, true to a degree past as Venus stations on the late evening of Mar 12th, and partile in the timing of the May 22nd Gemini New Moon. The implication is that there could easily be a fog of confusion and idealization around the areas that Venus represents, of aesthetics, beauty, finance, and relationships. Venus retrogrades but rarely, every 1 1/2 years or so, and in this case makes her Heliacal Rise on June 10th in the sign of Gemini. This is the begining of a new 584-day Venus synodic cycle with the Sun, characterized by that sign. Interestingly, Venus is Gemini’s esoteric ruler, so that the sign of Gemini has spiritual significance for Venus, and for relationships. In a related piece of esoteric information, the major arcana card of the Tarot corresponding to Gemini is… The Lovers! So the Venus cycle beginning next month, and presaged by the beginning of her retrograde period in this one, is a spiritual take on our relationship activities, which is, after all, one way to see the Universe, God, or Nature, operating through us.

That T-squre to Pluto, mentioned in the preceeding paragraph, also has some special spiritual implications. It lasts throughout this month and next, due to the slow movement of the planets involved, and the fact that Pluto has only just now stationed to retrograde motion, slightly before May began, with his companion in these current skies, Jupiter, turning to backward motion on the 14th – coincident with the Last Quarter Moon. The T-square is formed from Eris at 24 Aries, Haumea, another of these new KBO planets beyond Pluto, associated with profound connection to Nature, at 26 Libra, and Pluto-Jupiter at 24, and 27, of Capricorn. Jupiter is far closer to the earth and therefore eventually moves farther back in his retrograde motion, overtaking Pluto in a retrograde direction at the 24-degree mark, by the end of June, when the entire T-square is still very exact, so that we are in for two full months, and on into July, of this Pluto emphasis. This seems to be a pretty good parallel for the difficulties that we will still face by that time of sheltering in place, in spite of the gradual easing, because of the limitations of the testing for cornonavirus. It will indeed be a time of relative trial, and yet one that has overtones of significant societal, and as well, individual, metamorphosis. The spiritial element is provided by all four planets, with emphasis on Eris, for speaking and acting upon strictly our own truth, and Haumea, which represents Nature as spiritual path, and the operation of natural law. The transformations of this year, and especially this spring and the late fall, are huge. Our society will never, ever, be the same; and this implies that we have an opportunity to remake our civilization closer to the ideals that we all share of a more stable and more equitable world, where everyone is honored and has value, and where our earthly environment is given the respect that it deserves. Even the most pragmatic among us must acknowledge the simple truth that “there is no planet B.”

The other basic factor of the astrology of May, that the Taurus New Moon that began this current thirty-day cycle was conjunct Uranus in early Taurus, trickster god of surprising events and unexpected enlightenment, has been discussed by all astrologers. We are living through surprising times indeed, and the hits just keep on coming. The only thing to do is simply to continue to “expect the unexpected.”

In the midst of all these outer planet activations, and the Neptune square with Venus as Venus stations, and as the Gemini New Moon features a precise conjunction between Mercury and Venus in partile square to Neptune, really is quite special, the circumstance of the many close aspects to Pluto at the 24 degree mark, mid-month, really stands out as well. The Last Quarter Moon of May 14th is a potent time, with Mars just changing signs as well, entering Pisces, and with Jupiter stationing to retrograde motion a few degrees away from Pluto, while the Sun and Moon, at 24 + also of their respective signs, make for an amazingly fraught timing of this significant lunation. This lunar phase, characterized as a “crisis in consciousness” by seminal 20th century astrologer Dane Rudhyar, represents a time when we will be evaluating where we feel that we have arrived, in our estimation of our chaotic social situation. The crisis here in the US is deepening to the extent that massive testing and contact tracing remain illusive as the states try to gradually and safely re-open. At this mid-month timing we might be forced to once again reassess where we are with this massive health and economic problem, and where we might yet be able to go, from here.