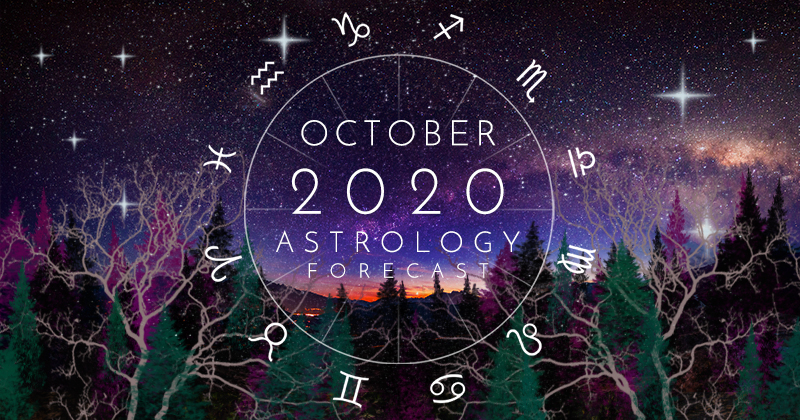 An October Month of Transformation and Surprising Enlightenment

Posted on September 30, 2020 in Overviews |
By Henry Seltzer for ASTROGRAPH Horoscopes

This is another exciting month for everybody, as the Covid cultural reset continues on, with possible renewed outbreaks, and as the world is bracing itself for a highly divisive U.S. presidential contest where the gloves seem to be coming off, perhaps on both sides. On an individual level, there is a great deal of polarization also, as competing ideas within each of us strive for balance and relative harmony, and as we are all challenged personally to use the utmost discernment in attempting to sort out truth from fiction, self-deception, or outright tricks and chicanery. This latter comment arises from a plentitude of fuzzy-logic Neptune in this month’s configurations, not as obvious as Saturn-Pluto, and trickster Uranus, but still a notable presence. As for these other heavy-hitters on the transformational scene, the recent Virgo New Moon from mid-September highlighted both Saturn in Capricorn and Uranus in Taurus by close aspects. The Sun and Moon were in partile trine with Saturn, and likewise in precise sesquiquadrate with Uranus, bringing these two antithetical archetypes into prominence and therefore implicit contradiction. Do I stay safe or do I go off the tracks of previous experience in search of new adventures that might just save my soul? It makes for a tough choice. Fortune favors the brave, but as the old Arab proverb also relates, “Trust in God but remember to tie up your camel.”

It is also worth repeating that strong Saturn is also strong Saturn-Pluto at this juncture. These two powerhouse planets implying massive structural transformation at both collective and individual levels are a mere three degrees apart. Eris and retrograde Mars, as October begins, are together in the sky at the 24-degree mark of Aries, a degree that matches exactly the degree of the Saturn-Pluto midpoint. The Eris component, representing the archetype of the Feminine Warrior, in support of deep intention, indicates that individual responsibility is vital now, and that it is literally up to each individual to take a stand for what they most deeply believe.

Where Neptune comes in is in the powerful sextile between Jupiter in Capricorn and Neptune in Pisces, supported by a subtle septile aspect of less than half a degree of arc distance between Neptune and a powerful presence of Uranus. Neptune and Uranus in combination suggests that when nothing else seems to work, an innovative spiritual solution may be closer at hand than we recognize. The truth of the matter is that the 3D physical world all around us that we can see, taste, and touch, is only less than half the reality we live, and in which we have our being. The rest is pure Spirit in action, “shaping our ends,” as the old proverb has it, “rough hew them as we will.”

It is also interesting to note that the Mercury Retrograde period that begins on October 13th in Scorpio, retreating to the last decant of Libra by November, presages some degree of confusion for the final three weeks of the U.S. election process. We will be in an introspective mode at this time, hoping to make sense of what we are seeing. Mercury turns direct before the polls close on Election Day, November 3rd, which is when the counting of all the mail-in ballots actually begins. Mercury does not get back to where it started, at the 11-degree mark of Scorpio, thus escaping its retrograde shadow, until November 19th. The way that things are shaping up, there is little question that the U.S. election results will not be available until at least mid-November, perhaps not even before the very end of the year.

Incidentally, there is a Last Quarter Moon on Friday, October 9th, when Jupiter precisely sextiles Neptune, when also a slowing Mercury, preparing to retrograde, opposes Uranus, and when the Sun and Moon are in close aspect to both Jupiter and Neptune. This is a very Neptuney time, and the weekend that follows is likely to be a great opportunity for distracting, dissembling, and spontaneous illusion. This is therefore a weekend that calls for the maximum in our own creative discernment to be able to understand what is truly happening. This weekend is also an invitation to Spirit, to ease our angst and our suffereing. This is truly a time to allow ourselves to see further into the beneficence of the Universe to be able to uphold us.

Through an interesting and challenging month we will need everything we have got, in terms of self-examination and looking beneath the covers of situations, to see this divisive and difficult time through to its conclusion. These must be our watchwords. As the Bible itself advises us, at some point we will know the truth, and the truth will indeed make us free.