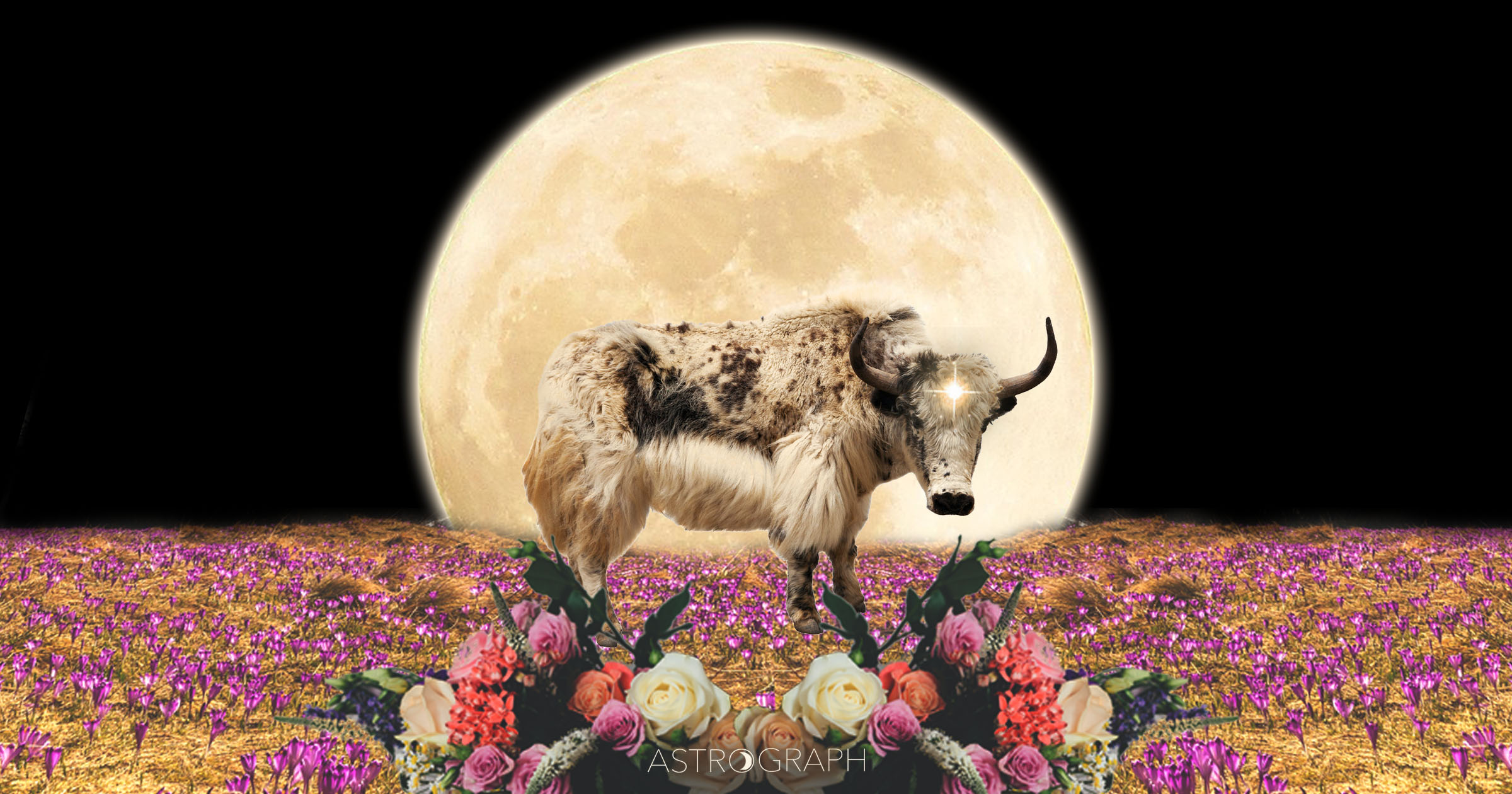 A Full Moon of Reconciling the Polarities

Posted on November 11, 2019 in Configurations |
By Henry Seltzer for ASTROGRAPH Horoscopes

The Taurus Full Moon at 19 plus degrees of the sign takes place on the morning of Tuesday, November 12th, quite early morning on the west cost and later in the day on the east coast and in Europe. As the Sun and Moon align on the Scorpio-Taurus axis, amidst the sharp polarization of these fractious times we are reaching out for balance, and for more conscious relationship with one another. Mercury, moving backwards in Scorpio, is one day past its exact conjunction with the Sun, which can manifest as a peak moment in the retrograde period, while Venus approaches expansive and joyful Jupiter, their midpoint at 19 plus degrees of Sagittarius being semi-sextile to the Sun at that degree of Scorpio. Meanwhile, the Sun and Moon make a sextile and a trine to Pluto at the 21-degree mark of Capricorn, while Pluto and Saturn remain in close parallel alignment, and Saturn trines Neptune quite closely, within a few minutes of a degree. All this outer planet involvement indicates further transformational activity both at individual levels and in the current cultural zeitgeist, as seems to be our collective fate these final months of 2019 as we head into the potential maelstrom of 2020. We are this month at one significant stepping stone within this arc of development, leading to the longitudinal alignment of Saturn and Pluto next year. This lunar phase generally indicates a continuation and a summing up of the initial impulse expressed in the timing of the New Moon that began the cycle, in this case the Scorpio New Moon of October 27th in opposition to Uranus, and as Mercury was just starting to turn to retrograde motion. This was itself an entirely transformational configuration, and as we reach for some form of fulfillment of the themes that were then expressed we will want to be considering a big picture look at where our inner knowing is leading us in this 2019 timeframe. In this current configuration, we may take heart from the Venus-Jupiter alignment in Sagittarius, which, during this Mercury Retrograde period of intense introspection, brings a hopeful element into the astrological picture, that we may be able to get it right this time, after all.

The polarities inherent in the previous New Moon were expressed in rather stark terms as the powerfully placed presence of progressive Uranus versus an equally highlighted presence of conservative Saturn, and involving Saturn-Pluto in close parallel. This close declinational connection between Saturn and Pluto remains in the present configuration, with the addition of a close trine between Saturn and Neptune, bringing a further pair of opposite archetypal images into play. Saturn represents hard-and-fast 3D reality while Neptune is redolent of a more all-embracing conception of universal oneness and transpersonal higher reality. These quite different points of view nevertheless feed off of one another; like darkness and light, each allows the other to exist, and would be nothing without the other pole. By taking a larger perspective into account, in fact, we can begin to see a way to go beyond the simplistic idea of taking only one side of a black and white set of absolutes and instead see the world we inhabit as it is: a more interesting combination of shades of gray. It is possible that the Jupiter emphasis that is also present in these current skies might allow us to visualize many more potential outcomes than a rather boring total exclusion of the opposing viewpoint.

Relationship, too, involves this sort of compromise, and we might want to begin asking ourselves how we are doing in this important area of life. Is there a way that we are seeing only one half of the picture, forgetting to be inclusive as regards the somewhat different (or even quite different) viewpoint of the person that we are endeavoring to partner with ? Creative solutions abound once it is that we recognize the need to stay open to possibility.

The Sabian Symbols for this Full Moon may also provide interesting food for thought. For the Moon, at the 20th degree of Taurus, we find, “Wind clouds and haste,” which well characterizes our modern society and its multi-form illusions. Marc Edmund Jones, who caused these symbols to be created in the 1920s, references, “tranciency … (and) the instability which results from a disinclination to give very much (of oneself).” For the Sun, in the same degree of Scorpio, we have, “A woman drawing two dark curtains aside.” This symbol might refer to the veil between the worlds that can only by means of discernment be drawn aside, and that can come, as we have been discussing, in different flavors, equally false. Jones references, “the enduring values which the average individual visualizes behind the outer façade of everyday existence, and of their desire to penetrate to more worthy dimensions of experience.” He goes on to state that, “Implicit in the symbolism is the essential courage of the soul, and the vital concept of life as unrewarding except as it provides a way to cross every threshold of common limitation.” By reflecting on these limitations and on our determination to get the most out of our existence here, may we rise above petty considerations as much as we are able, and strive to remain in the true heart of the matter at hand. 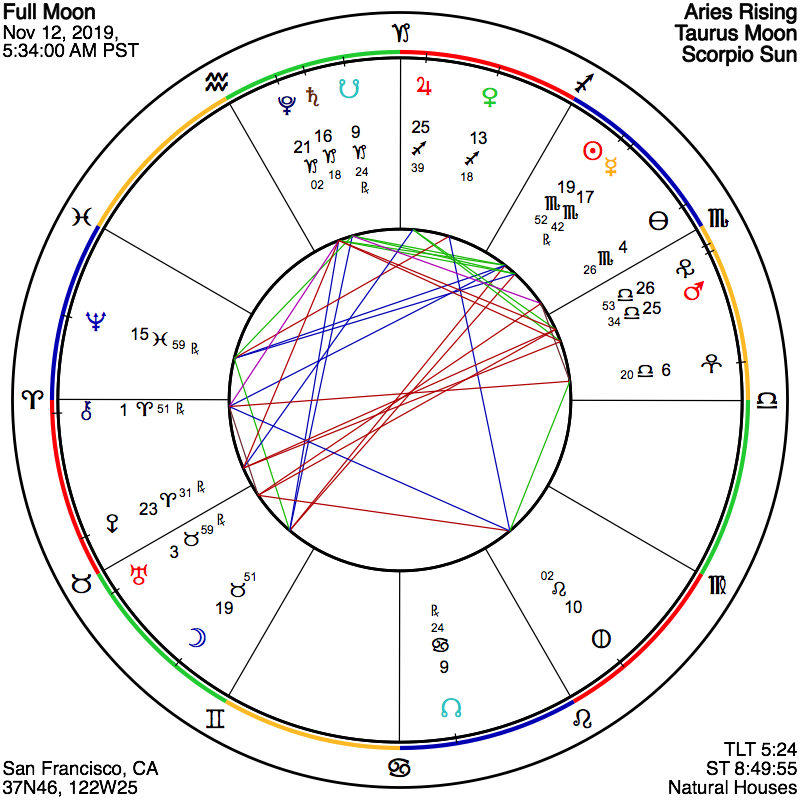