Our acclaimed Astrology Desktop Software puts astrology at your fingertips!

Sale Ends May 31 at Midnight PST. 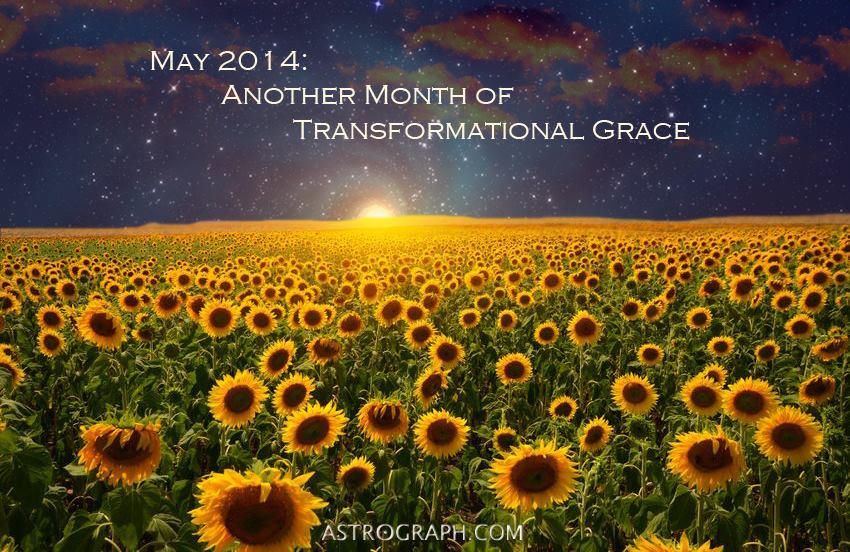 Another Month of Transformational Grace

Posted on May 1, 2014 in Overviews |
By Henry Seltzer for ASTROGRAPH Horoscopes

The astrology of May follows a month that was very intense in its transformational import, including a stressed-out Earth Day, and therefore represents something of an aftermath to this significant time for the planet and for ourselves, thus a month when we could find ourselves taking stock, and attempting to further understand the changes taking place within us. This is indeed an excellent time for introspection with the retrograde of Mars in Libra coming into mutual reception with Venus in Aries, and stationing to direct motion on the 19th. Just before this month began, the Solar Eclipse New Moon of Tuesday, April 28th, taking place in Taurus, indicated that we have yet another intense month ahead of us. This extra-potent New Moon had many chimes with the Uranus-Pluto square that therefore remains largely active in the current month. Although this powerful collision of outer planet energies begins to fade after this month's cycle, it returns in December, thus promising by the end of this year further developments in the ongoing transformation that we remain in the midst of.

With Venus, the ruler of Taurus, poised to enter Aries, we have a very active relationship equation brewing. We may well come to review more completely and reflect on the way that relationships work themselves out in our lives. Venus conjoins Uranus by the time of the mid-month Full Moon, taking place on Wednesday, May 14th. Interestingly, Saturn is also bi-quintile Uranus just as Venus conjuncts it. This is a very dynamic Full Moon, with Mercury also participating, and Mars preparing to station in aspect to the degree of the recent eclipse. This implies greater consciousness around the issues of assertion and relationship, along with taking greater responsibility for relationship issues that we have been gradually facing up to.

Another astrological archetype that remains a powerful factor in these May skies is Chiron, the Wounded Healer, which is trined by Jupiter for much of the month, most especially at the time of the mid-month Full Moon. Saturn forms a grand trine in Water signs with Chiron and Jupiter at the time of New Moon of April 28th, an aspect pattern that perfects by mid-month. We are looking more closely into our wounding, and that residue of early trauma that prevents us from entering into the transformative nature of these times more wholeheartedly. We can unlock an amazing degree of power and freedom for constructive change once we are able to accept ourselves in the dark places within us, and begin to move beyond their crippling effect on our lives.

Uranus and Pluto continue to some extent all this year in their storied square, symbolizing the drastic realizations of this period and the urge to act in concert with them. Uranus and Pluto remain only a degree or two apart for the entire month of May. Over the summer this potent aspect wanes, returning in December. We are therefore making the requisite adjustments required in our lives, however reluctantly or slowly at times, at other times more quickly, over this entire period, indeed right up through to the end of the decade. These two years, of 2014 and 2015, do seem to represent the crux of the decade, at least as far as this aspect of radical transformative change is concerned. These times of epiphany and change do make a difference. However we can come to this, we need to know that our faith in the universe will be repaid, and that our actions actually matter, in order that we truly succeed in what we are currently attempting.

The Astrology of May 2021 The Sun is in Taurus

The Last Quarter Moon is in Pisces: All day Next Mercury Retrograde
May 29 - Jun 22 Other Announcements
Last updated May 6, 2021