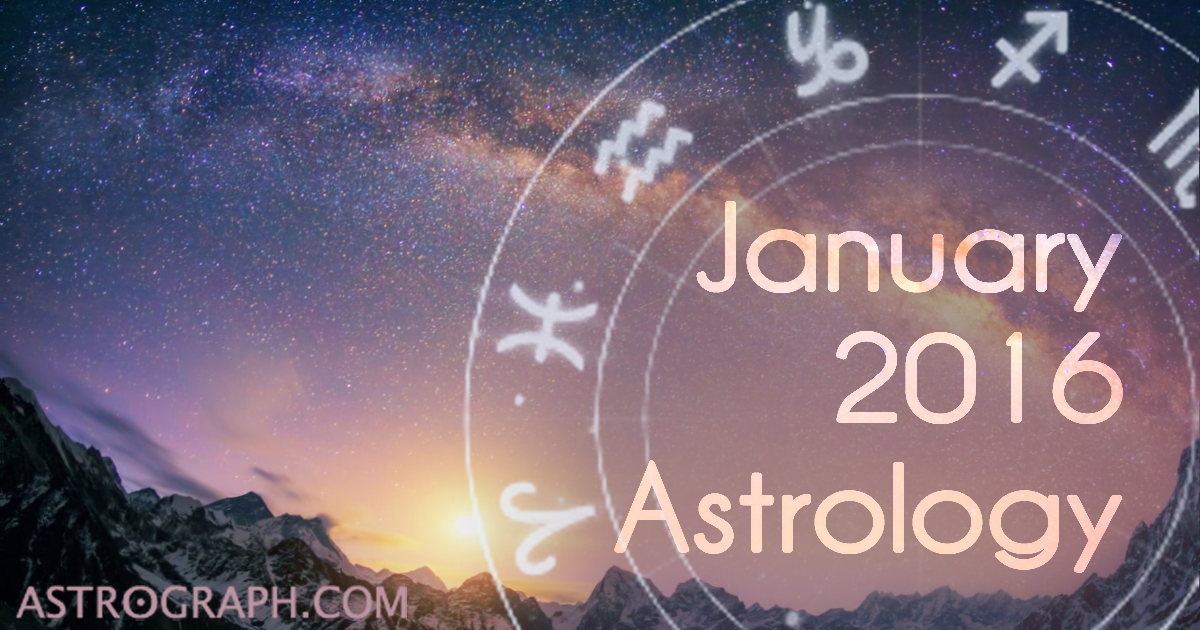 A January of Introspection, Realization and Transformation

Posted on January 1, 2016 in Overviews |
By Henry Seltzer for ASTROGRAPH Horoscopes

The astrology of January 2016 features Mercury in retrograde, Jupiter, Saturn, Uranus, Pluto, and Eris. As we slide into the new year we are treated to a large dose of outer planet interaction that ensures that the major changes of the past year are far from over. The old lunation cycle from mid-December had its kick-off with Mars opposite Uranus, and the new one that begins with the late Capricorn New Moon of the evening of January 9th takes place a few degrees from Pluto, as the square between them narrows in exactitude to less than one and a half degrees. This emphasizes over the course of the present month the powerful factor that these "gods of change" represent, although according to modern thinking about the symbolic influence of such World Transits, this configuration will remain active until the end of the present decade. For more information regarding this revolutionary and evolutionary combination, see the remarkable book Cosmos and Psyche, by Richard Tarnas. Since Mercury is about to turn retrograde, on January 5th lasting to the 25th — and beyond, when we take the period of the 'retrograde shadow' into account — traveling mainly through the sign of Capricorn as it does, we are now in a thoughtful period, with plenty of energy for introspection, and for questioning whether the logic of the material world has sufficient answers to the fundamental questions of our 21st Century existence.

This is a big month for Capricorn, with Mercury retrograding though and with Pluto occupying the middle degrees of the sign. At the timing of the January 23rd Full Moon, Mercury is closely conjunct Pluto, with Uranus is close square, and we also have the entrance of Venus into the sign, occupying the first degree of Capricorn and aspected by the Sun and Moon in opposition. It is therefore in the final week of the month when we may be having the most direct insight into the radical changes that we can still feel ourselves to be in the very midst of.

Because Saturn, Capricorn's ruler, is also prominent in these January skies, and coming into aspect to Pluto and Uranus over the next few weeks, this is also a time of increased polarity, when the urge to move ahead with novel vision is contrasted with an equally strong desire to stay in one fixed place, adhering to the rapidly fading legitimacy of an often-dysfunctional status quo. It is true that we need the new idea that comes along just in the perfect timing to carry us away from what has gone before, and equally that we need to sometimes take a conservative approach to unbridled change.

The recent Christmas Day Full Moon featured many aspects to the new planet, Eris, discovered as recently as 2006. This new astrological archetype is now in the same astronomical category as Pluto. I have been able to demonstrate that Eris is related to taking a definitive stand within oneself for deep soul intention, and I therefore refer to Eris as a Feminine Warrior for soul purpose. I feel that in this powerful turning of the year timing, every individual is encouraged to take a strong stand for what he or she most deeply believes. The January 7th station of Jupiter, in Virgo, tightly aspects Eris, so that the inconjunct aspect between them is never more than one degree away from exact, strengthening Eris in her influence, over the course of an active month.

With all these outer planets thus engaged, we have before us a somewhat difficult month of profound change, during which we will gain a better understanding of our existential situation. Mercury in retrograde motion throughout implies that we will be looking inward more readily than outward, and yet that is exactly where the most profound information for us will likely be found.