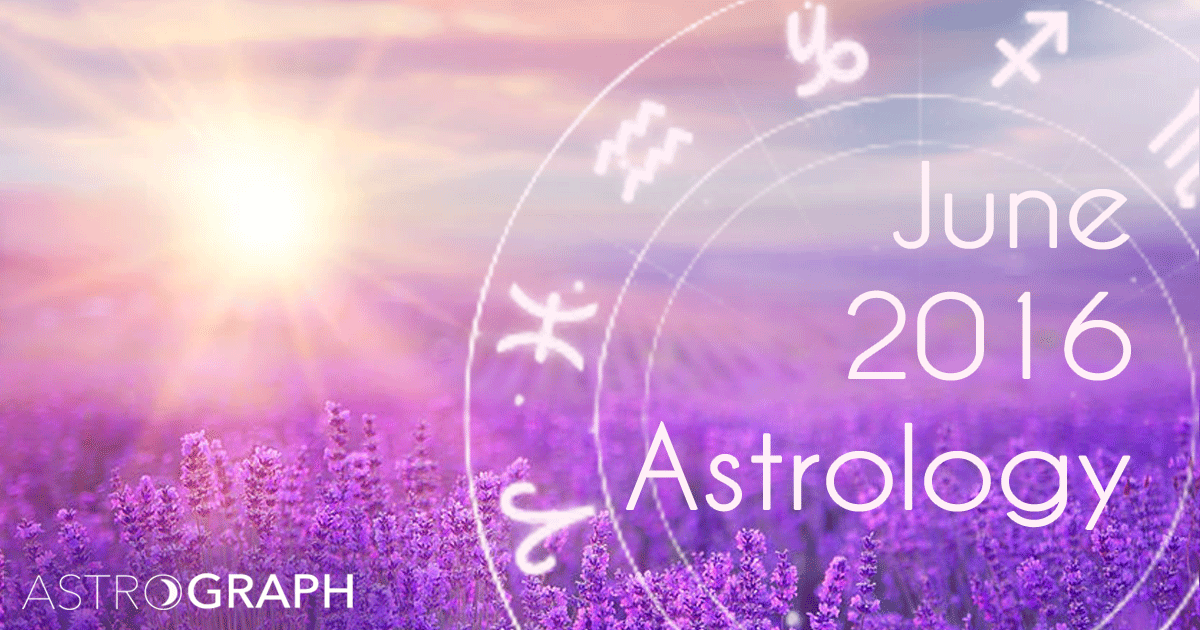 The Astrology of June – Recalling Yourself to Yourself

Posted on May 27, 2016 in Overviews |
By Henry Seltzer for ASTROGRAPH Horoscopes

The astrology of June features Venus, Mars, Jupiter, Saturn, Uranus, Neptune, Pluto, and Eris. The most impressive feature is a Grand Cross in mutable signs that occurs early in the month, on the Gemini New Moon, in partile conjunction with Venus, meaning the same degree of Gemini. The Sun, Moon, and Venus in the fifteenth degree of Gemini are across the zodiac from Saturn in Sagittarius, and make close squares to Jupiter in Virgo and Neptune in Pisces. With Neptune so greatly emphasized this month, also stationing during its first half, there is a dreamy and unrealistic quality to this timing, offset by the strong presence of reality-oriented Saturn. The New Moon configuration also emphasizes Venus, so that issues of how we characterize beauty, conduct our relationships, and do our art, all come up front and center during this first weekend of June and then for the following thirty days of this rather intense lunar cycle.

The Uranus- Eris conjunction is also very close now, and perfects for the first of three times on June 9th. This bring up quite a strong hit of Uranus, so that we might think to expect the unexpected, as we have already been seeing on the political scene — here in this country at least — with the unlikely candidacies of Bernie Sanders to the left and Donald Trump to the right, both in opposition to the status quo. Sanders is calling his campaign a "revolution." Seeing the Eris archetype magnified as well means that people are becoming even more ready to take a stand that comes only from their own unique perspective that emanates from deep inside.

We also have a powerful presence of Pluto, because aspected by this New Moon, only two degrees off from an inconjunct aspect of 150 degrees. With both Uranus and Pluto activated, and still in the remains of their square alignment until 2020, the same sense of total transformation that we have been seeing these past few years is still operating to jolt us out of our everyday lives and our former hang-ups, to the extent that we are ready for it, into something excitingly novel that frees us from the past in a creative way. The effect of Uranus and Pluto in combination is a one-two punch that allows the revolutionary vision of startling new possibilities represented by Uranus to stir the pot and prepare the way, and then calls forth the wrecking ball of Pluto to come in to radically rearrange the field for the seeds that have been thrown to take root and prosper.

Jupiter and Saturn have their own dance right now that is also triggered in the course of this monthly cycle, especially at the timing of the New Moon. They are still in square, having completed their final perfection a few days before June 1st, and remaining less than two degrees away from exact at the New Moon that so directly aspects each of them. The optimistic element of jumping ahead with joyful abandon to welcome in a new future without reservation (Jupiter) is tempered by doubts and fears (Saturn) as well as his reasonable sense of caution, and profound reluctance to leave the status quo behind. Some of each is excellent but a tug of war ensues so that fruitful compromise takes working at it.

Chiron, the Wounded Healer, stationing late this month at 25 degrees of Pisces, is aspected by Uranus and Eris in conjunction, and by retrograde Mars, as he drifts backward into Scorpio, stationing direct at 23 degrees plus, on the 29th. With Chiron so greatly emphasized in this current monthly cycle, we are more aware on an intuitive level regarding our trepidation about making needed changes, and our feelings of lack, not good enough, usually stemming from early childhood trauma, that can trip us up and hold us back from our most concerted efforts to achieve inner goals. Getting past these feelings of insufficiency allows us to cross the threshold into a brighter future that truly works for us, long term, and that matches our most deeply felt values. The necessary action on our part, to move beyond this limitation, is to find the place within ourselves from whence our fears arise, and to come to terms with this part of ourselves, a part that needs love, acceptance and reassurance. This is the path that will lead us into greater wholeness, allowing us to unleash our true potential.

SAVE $84 Now through the end of June!