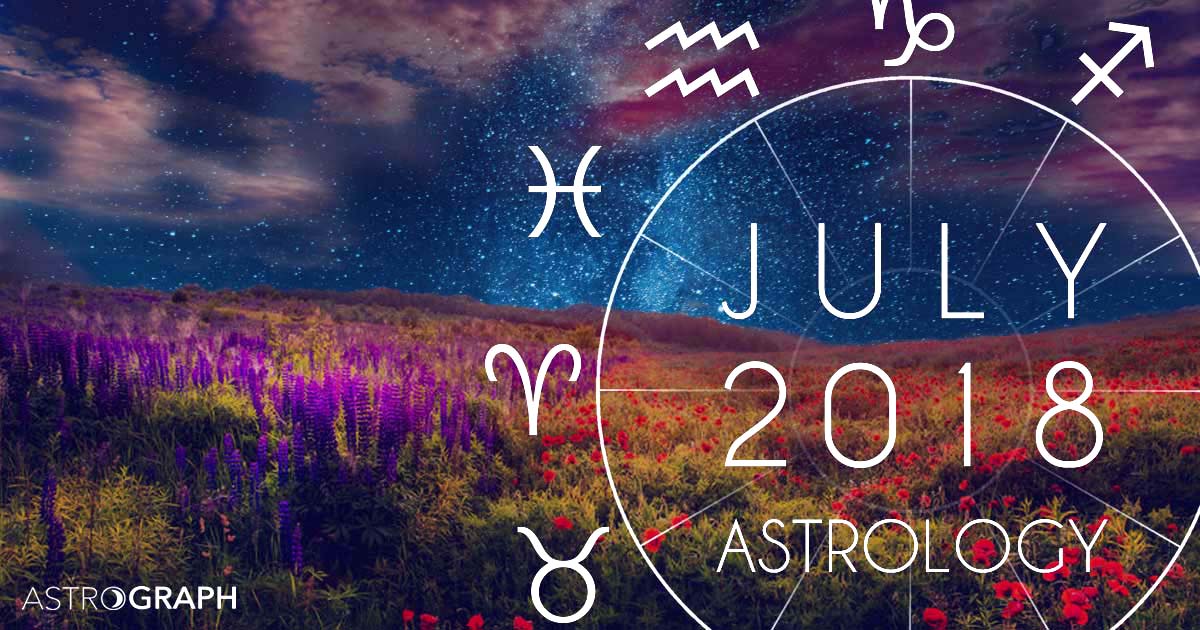 A July of Transformation and Spiritually Looking Within

Posted on June 30, 2018 in Overviews |
By Henry Seltzer for ASTROGRAPH Horoscopes

The astrology of July features two eclipses, as well as the retrogrades of Mars and Mercury, along with the planetary energies of Venus, Chiron, Saturn, Uranus, Neptune, Pluto, and Eris. This is a big month, to say the least. The midmonth Cancer New Moon and Solar Eclipse, taking place on July 12th, is exactly opposite Pluto, bringing this transformationally oriented planetary archetype that has been featured in recent lunations even further into prominence. We are all in the soup now, and it is the soup of change. Like the stone soup of legend, this is more a matter of what you bring to the situation than what comes at you. You are being encouraged on the part of the universe to let go of blocks and barriers to growth and transformation, to open to deep intuition, very active now, and to find your most sincere set of values that you might aspire to, your actual bottom line intentions for this lifetime. When you act strictly from these, you proceed with the spiritual evolution that is your birthright. Then, late in the month, another eclipse, this time a Lunar Eclipse and Full Moon, taking place on July 27th, highlights many planets including a newly retrograde Mercury, plus Saturn, and Uranus, and represents an important moment in the Mars retrograde as well. After sunset on this day, once the sky is dark, this happens to be the second of two nights when Mars shines most brightly because opposite the Sun, with the earth lodged directly between them. This entire summer has Mars in retrograde so that ordinary activities are suspended in favor of inner contemplation. We leave off from the “getting and spending” as Wordsworth puts it in his poem entitled “The World is Too Much With Us,” and take up the soul task of searching out what it is that we have inside us, to make good on, as we intimately re-engage with our lives.

Reactionary old Saturn, implying conservative empowerment, as well as retrograde Mars, are emphasized as the month begins. Saturn was featured in the June 27th Full Moon that preceded by a few days the current month. We all must recognize that we are currently in a mode of slow or stop, which is frustrating, and that, on the other hand, the lessons from this period of time will be long lasting. The Solar Eclipse of July 12th features a Venus-Uranus-Saturn grand trine which is also aspected by Chiron, the Wounded Healer. As we delve beneath the surface of masculine-feminine relations, we will explore inner wounding, as well as new avenues for relating, such as that implied by the current #MeToo movement. There will also be the resistance symbolized by Saturn toward departures from any existing status quo. The Mars retrograde lasts all summer and brings greater consciousness to the underpinnings of assertion, aggression and masculinity (you can see a full article on this at Mars Retrograde 2018 ).

In the timing of this extremely potent Cancer New Moon eclipse there is also a grand trine in water – between Sun/Moon in Cancer, stationary Jupiter (beginning to move forward once again, in Scorpio) and Neptune in his own sign of Pisces, thus bringing a spiritual component to the mix of ideas and energies swirling around us now. As has been increasingly evident to many observers who take astrology seriously into account, you simply cannot discount the extra-dimensional and trans-personal possibilities beyond the physical that are included as a fundamental theme running through all of our astrological analysis. The ancient science simply does not function in any other way.

The new planet, Eris, a Feminine Warrior archetype of fighting for deep purpose, or soul intention, has also been featured in the astrological currents, most recently in the Solar Eclipse of July 12th, which squares her. Recent news items have also emphasized this symbolism, as revealed in the position of Eris in the US chart from July 4th, 1776, which has Eris at 8 plus degrees of Capricorn. Eris in the US chart lies in partile aspect to US Uranus, a planetary archetype that signifies, among other things, a sudden crisis. The Mars retrograde degree of 9 Aquarius was trine US Uranus, within ¼ of a degree, and within a degree of aspecting by semi-sextile US Eris as well. It is therefore quite significant that, as has been dominating the news, the resignation of Supreme Court Justice Anthony Kennedy in that same timing suddenly created a situation where progressive values are threatened, including most expressly a woman’s right to reproductive choice. This was famously granted in the landmark 1973 decision of Roe versus Wade, which President Trump has vowed to overturn by means of his judicial nominees. The Democrats intend to stop this, by postponing the confirmation hearings until after what is now an even more crucial election in November. Both parties in the United States are thus saying that this sudden announcement means that, if their side is to triumph, then everyone in their camp will now have to stand up and be counted for what they most sincerely believe. It is fascinating to note that this is precisely the message of prominent US Eris, closely conjuncted by the Full Moon of June 27th, the day of Justice Kennedy’s announcement, and aspected by the retrograde of Mars one day earlier. This correspondence is so striking, and so redolent with the meaning of this new planetary archetype, that it cannot help but give us pause as we contemplate the wonders of the larger, and fully spiritual, world that we are actually living in. As astrologers are often fond of saying, you just can’t make this stuff up!