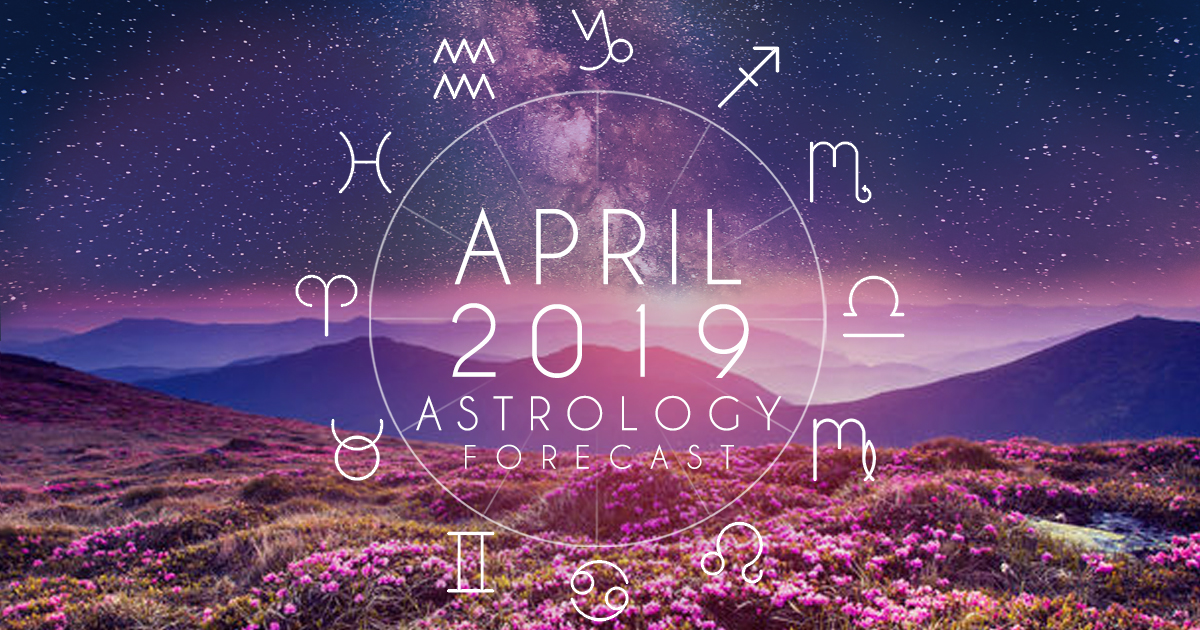 An April Month of Recovery, Recognition, and Further Transformation

Posted on March 30, 2019 in Overviews |
By Henry Seltzer for ASTROGRAPH Horoscopes

This current month of April is in many ways a continuation of the intense transformational thrust of the previous thirty-one days of March, although Mercury is now in direct motion, and slowly recovering. The first few days will feel very much like Mercury never even turned around, because of a unique circumstance: in the waning days of the previous month, Mercury stationed just ahead of mystical and otherworldly Neptune, so that a forming conjunction immediately took place. This dynamic aspect, with Mercury still slow-moving, stays partile or same-degree all the way through the third of April. We will see further evidence of vague ungroundedness, idealism and illusion, and questioned perceptions. Then, two days later, the Aries New Moon makes close aspects with Neptune, including the Sun being contra-parallel to Neptune within one tenth of a degree. The first week of April is therefore likely to be a quite confusing time. Mercury finally leaves its retrograde shadow on April 17, having entered Aries quite late on the previous evening, and this indicates another shift in the psychic weather. This current month also finds trickster Uranus very much highlighted, especially in the timing of the April 19th Full Moon. With Uranus, Neptune, Pluto, and Eris continuing to dominate the astrological airwaves, major structural change is still very much upon us. This means in summary that the intense transformational cycles of this spring continue into April, and seem to present opportunities along the lines of resolution of existing issues, or at least a partial resolution, as we move forward into greater wholeness.

The Full Moon that enlivens the second half of April has an interesting twist, in that the Sun and Moon occupy the 29-degree point of their respective signs. This is considered a problematic degree, indicating the “last chance” a planet has to get it right with the lessons of the sign that the planet has been occupying. Because the Sun is hesitating on the very brink of Scorpio, and for the Moon, of Taurus, this does bring the beginning of these signs into the picture. In particular, the presence of Uranus in early Taurus, Mercury and Chiron, the Wounded Healer, in early Aries, and Venus in late Pisces are all part of this quirky Full Moon configuration. Mercury, having escaped from its retrograde shadow, makes a partile aspect to Uranus. We may well expect surprises, and surprise information, especially as we navigate our relationships and questions of aesthetics or money (Venus) and the consciousness of inner wounding ( Mercury-Chiron). In dealing with Chiron issues, consciousness is more than half the battle. As a significant part of this month’s developmental cycle, the awareness of where we have been traumatized in the past, and where we may yet allow ourselves to heal, is therefore vital, especially in this latter part of the month.

Eris, too, Feminine Warrior for soul intention, remains prominent, being in partile square with Pluto in Capricorn, trine Jupiter and contra-parallel the Moon in the Aries New Moon of April 5th. This implies that cosmic pressure is upon us to speak out, and to act, in accordance with our most sincerely held values. Eris is also closely opposed to Haumea, another of these new planetary archetypes discovered as recently as 2006-2008. Because Haumea represents earth consciousness, and seeing Nature as a spiritual path, the implication is that environmental issues will begin to get more airtime in this progressive Congress, as indeed seems to be the case.

Transformational Pluto is also quite prominent in these April skies, maintaining the connection with nearby Saturn supplied by their close parallel, of a mere ¼ degree. This indicates, in the words of seminal astrologer Richard Tarnas, “conservative empowerment,” as we have been seeing lately, and, as well, major structural change. This latter is an important component of what must happen in the culture, if global society is to confront the challenge of looming climate change and be at last able to deal with it. As we near 2020, and the powerful societal transformation that is indicated by the triple conjunction of Saturn, Jupiter and Pluto, in square with Eris, we will see if this month’s increased awareness might provide a blueprint for the future.