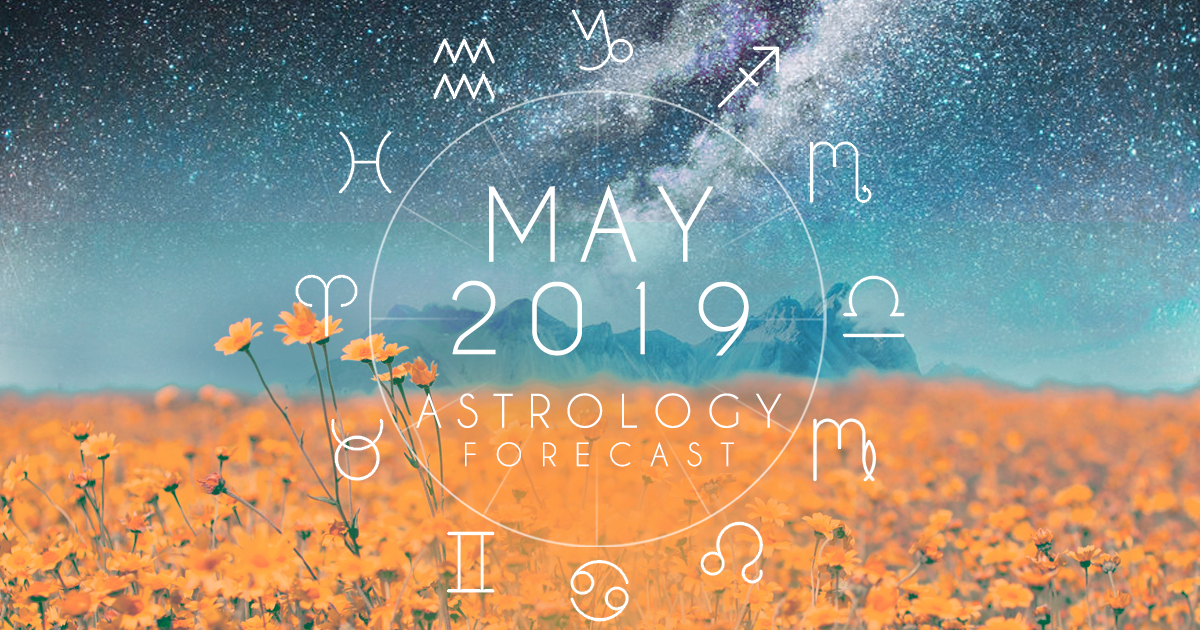 A May Month of Marshaling Resources and Acting From Soul Perspective

Posted on April 30, 2019 in Overviews |
By Henry Seltzer for ASTROGRAPH Horoscopes

The Astrology of May reveals many of the same themes that have dominated the cosmic airwaves for the entire beginning part of this year. In particular, Uranus, Neptune and Pluto make strong appearances in the May 4th New Moon, signaling the transformational beat of recent months. Pluto is once again very powerfully emphasized in his partile square with Eris, the new planet that is in some ways a twin energy to Pluto, centered in a similar part of the solar system, although even further out, and about the same size, implying a connection to the unseen and largely unknown depths within us all. In my research, which is slowly becoming more generally accepted by the astrological community, she can be shown to be a feminine warrior archetype, fiercely in support of soul intention, or our most sincere and deeply-held values, encouraging action that aligns with this profound inner purpose. Pluto also remains closely parallel and conjunct to Saturn as the month begins, with both of these powerhouse planetary energies having recently stationed in late April. Because they are moving extremely slowly in the sky, this increases their apparent influence. Uranus is also prominent in these May skies. Having recently entered the antithetically themed sign of Taurus, Uranus is featured by the New Moon being in the same sign, widely conjunct, with the Moon also in close parallel. At the Full Moon of May 18th, Uranus is clearly emphasized by his close conjunction with Venus, the Taurus ruler. Additionally, with regard to Neptune, Venus lies in perfect semi-sextile in the New Moon timing, with Uranus in perfect semi-square to Neptune, so that this planet of otherworldly and mystical proclivities is also extremely activated. With all five putative outer planets, Saturn, Uranus, Neptune, Pluto, and Eris, so distinctly emphasized now, we might well expect that the massive structural challenges that the society is facing, together with all of us as individuals, will come to a further level of intensity this month, leading to near-breakdown. But, as it is always good to remember, breakdown also can be the necessary prelude to breakthrough.

The prominence of Neptune in the astrology of May leads to several different ways of looking at the month’s effects. Importantly, the Neptune archetype fits in with Uranus and Pluto as agents of the trans-personal and the transformational. Uranus represents the unexpected and startling vision of possibility, including the potential for jumping the tracks of existing predilections and swinging for the fence, transcending the bounds of the pre-existing status quo. Neptune in turn frees us up from routine expectations and mind-numbing conformity. With our physical eyes tightly shut and yet our minds wide open, Neptune encourages us to dream and to dream big, taking on to a certain degree the transformational nature of more intensely changeful Pluto. Pluto, of course, represents the death and rebirth that true transformational change implies. As far as the other indications of strong Neptune, now occurring, most typically perhaps, is Neptune’s reputation as a foggy and indistinct purveyor of fantasy and misconception, together with the potential for self-deception. This is the hallmark of our propagandistic current culture, with its cry of “fake news!” whenever one side finds online evidence that seems to contradict its stated mandate. Then, too, Neptune represents the spiritual dimension of our lives, the compassionate feeling of oneness with all sentient beings that characterizes us as humans at our very highest. As stated in the Tao Te Ching, one who recognizes all people to be a part of oneself is a sound person to guard them.

The interesting presence of Eris in close square to Pluto, for last month and most of this one, also deserves further mention. This partile square between Eris and Pluto returns at the beginning, and then again near the end, of 2020. This is a dynamic configuration, made still more potent by the presence in opposition to Eris of another of these new “dwarf” planets, Haumea, which also seems to be quite powerful in charts, representing “profound connection with Nature.” Makemake, the fourth largest of these new dwarf planets that are officially named, representing, along with Haumea, an activist connection to Nature, and to earth issues, is also prominent, being opposite Chiron in the current astrological patterning. And indeed, we have seen an up tick in earth activism in the current zeitgeist, with efforts such as the “Green New Deal” gaining popularity. This T-square to Pluto lasts throughout the month, and distinctly emphasizes the transformational intensity of these fraught times, as represented by the focal point of Pluto. In the May 4th Taurus New Moon, we also find Mars opposite a relatively slow-moving Jupiter, in his own sign of Sagittarius, another spiritual factor, similar in its own way to strong Neptune. In the midst of chaos, optimism for the future since, at least, change is near. Of course, Jupiter famously conjoins Saturn and Pluto in a triple conjunction neat the end of 2020, representing a strong push for the total metamorphosis of society itself at that critical juncture.

We also have briefly an indication of a potentially more conscious appraisal of our situation coming up on May 21st, when the Sun enters Gemini in perfect conjunction with Mercury, Gemini’s ruler. The difficult factor of Chiron, the Wounded Healer, is also powerfully present with these other strong indicators, since Chiron in early Aries remains semi-sextile to Uranus, partile opposed by Makemake, and is squared by Mars as he moves further into the sign of Cancer, after the 21st. The indications are this: that as we become more aware of our inner wounding, we can begin to move beyond this barrier to becoming all that we can be, thus fulfilling our spiritually fore-ordained destiny. May this be so !

Buy Now for $107.00 Download Demo Learn More
Dates given for astrological events are based on U.S. Pacific Time. Add or subtract hours as appropriate for your actual time zone; for example, East Coast, add 3 hours; Western Europe add 8 or 9.