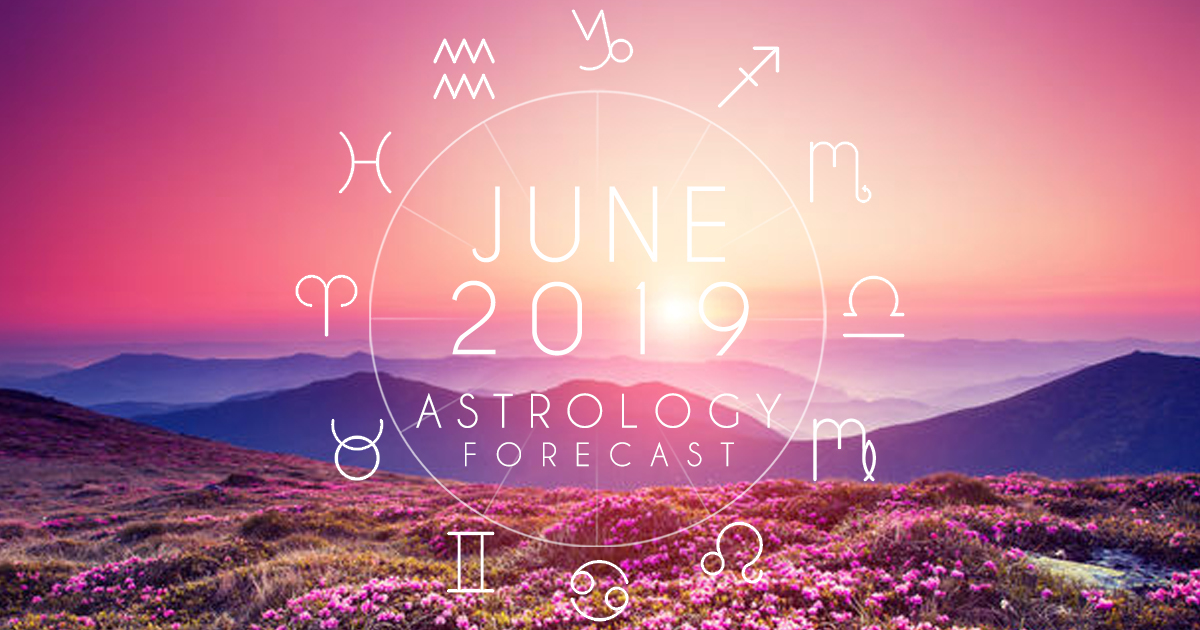 A June Month of Spiritual Alignment with Necessity

Posted on May 31, 2019 in Overviews |
By Henry Seltzer for ASTROGRAPH Horoscopes

The Astrology of June reveals the strongly transformational theme that has been a near-constant factor lately in the astrological currents that symbolize our actions here below, the challenges of our zeitgeist and also of our personal struggles to maintain equilibrium in the face of that. Our world is changing rapidly as we head into the maelstrom that is 2020, and its dramatic cosmic indications, one way that Astrology helps us to understand our moment in history. This month, while Pluto and Saturn in combination continue to dominate the patterns, in the power of their message of massive structural metamorphosis, a stationing Neptune also makes the occult headlines since he is in nearly perfect square to Jupiter as he does so. Neptune, as most know, is a multiple-edged sword of a fuzzy and insubstantial nature, signaling on the one hand “fake news” of various persuasions and intended deception, on another, the compassion and spiritual sense of wonder at the recognition that “there is really only one of us here,” that all people are a part of what we might call God, and of each other. Referring to a funeral signal, therefore, the poet intones, “Never send to know for whom the bell tolls, it tolls for thee.” Actually, in addition Pluto and Neptune, the planet Uranus is also specially emphasized in what looks to be another climactic month. Besides closely aspecting Neptune all month, Jupiter – in the timing of the June 3rd Gemini New Moon – also makes a close forming sesquiquadrate aspect to trickster Uranus. This presages further strange attractors and unexpected happenings that lead to greater enlightenment concerning who we are, and where in this world we might actually be heading.

On the world scene, one huge subject matter looms, that of global warming, as storms grow in their violence and their impact, with the near-certainty of devastating future sea-level rise, and as governments, rather than taking concerted action, continue to dither and deny. This vitally important and topical issue is actually reflected in the current astrology. The two new “dwarf” planets, Haumea and Makemake, can be shown to be Nature planets connected to both love of and concern for our earthly environment, and they are also prominent in these June skies. Makemake, at 3+ Libra, is closely opposed to Chiron, the Wounded Healer, while Haumea at 24+ Libra lies in partile opposition to Eris, thus in a T-square with Pluto in Capricorn. Makemake with Chiron indicates the painful place that many are in these days with regard to climate change inaction, while Haumea with Pluto and Eris is a prelude to determined activity. We might therefore expect to see the giant question mark regarding what to do about intensifying global warming to receive additional scrutiny in this month of June, and over the summer. This issue is indeed turning out to be a defining characteristic of the U.S. presidential race, with the Republican side trying their best to deny it as a serious problem, while several in the Democratic field are making it a key talking point, and supporting the concept of a “Green New Deal” that would also be helpful for the economy. As relatively low profile as this rather crucial issue remains in the public consciousness, it is likely to gain significant ground over these next few months to become a surprisingly significant factor in the election itself.

Along with the T-square from Eris-Haumea to Pluto, at the Sagittarius Full Moon of Monday, June 17th, when Mercury and Mars conjoin around the 20-degree mark of Cancer, opposing Pluto, this configuration becomes a grand cross. This intensifies even further the issues described above, in the timing of the Full Moon and subsequent Summer Solstice of June 21st, of massive structural societal change, and, as well, needful transformation of life style in the face of the obligatory response to global warming. This configuration also brings Eris herself more greatly to the fore, which has been shown to be a Feminine Warrior energy in support of soul intention. For more information see my book, The Tenth Planet, available from Amazon. This newly rising archetype makes for a perfect fit with the idea of the necessity of radical action, of taking a stand for whatever it is that you most sincerely believe, because such action is vital now and in the decade to come, starting with 2020. Each one of us must articulate the views that they feel most strongly about, independent of the advice of friends and family, or the undertow represented by popular thought, and what is more, act on strictly that inner conviction. All this and more is necessary if we are to save planet earth, enabling future generations to thrive.