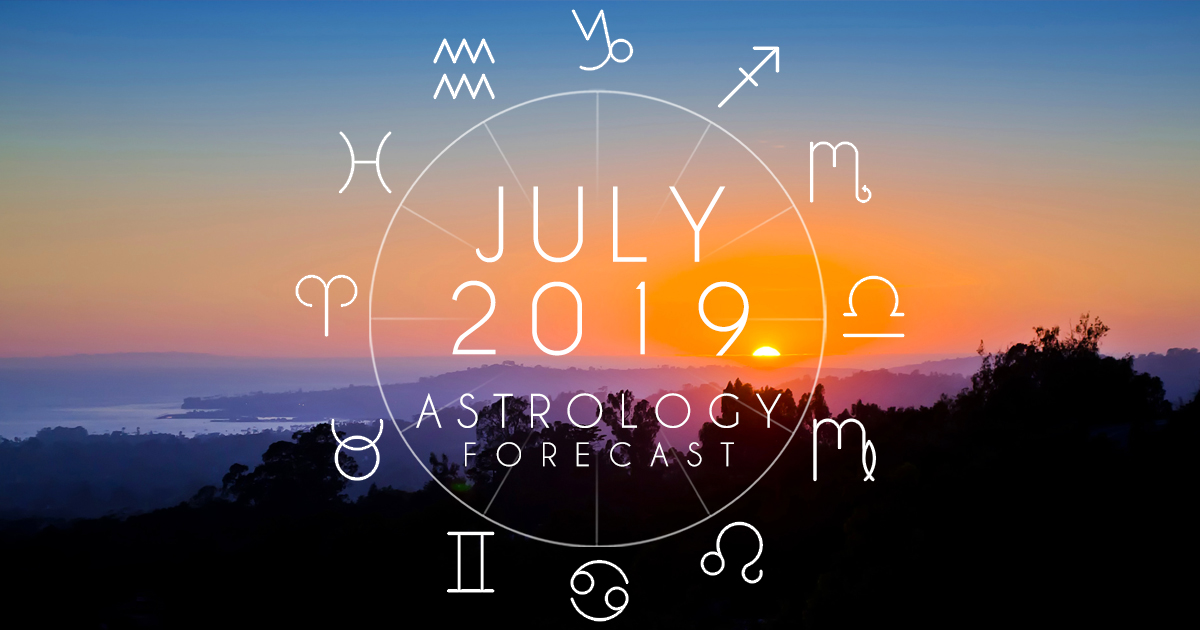 A July Month of Looking Back and Through

Posted on June 30, 2019 in Overviews |
By Henry Seltzer for ASTROGRAPH Horoscopes

The Astrology of July features the return of Eclipse Season, with both a Solar Eclipse in Cancer at the very beginning of the month, on July 2nd, and a Full Moon Lunar Eclipse in the Sun’s opposite sign of Capricorn that takes place on July 16th with the Moon conjunct transformative Pluto. These lunations are big astrological news but there’s more. This month also contains a full three weeks of Mercury in retrograde, through the signs of Leo, and then Cancer, and with the start of this retrograde period slated to be quite an intense moment because, as Mercury begins to move backward through early Leo, it will be in close conjunction with feisty Mars and in square with the startling trickster energy of Uranus! This is a Mercury Retrograde that will be, as usual, an intensely introspective stretch of time, and yet the beginning of which will be an unusually active and eventful few days, between Sunday, July 7th through the powerful First Quarter Moon of Tuesday, July 9th. Therefore, besides the introspective musing on where your energy is taking you these days – and perhaps some rather wild directions will be revealed – there are as well the usual suspects: Saturn with Pluto, a close parallel, Jupiter with Neptune, in square, and prominent Chiron in semi-sextile aspect to Uranus. With all this outer planet activity, the transformational beat continues, as we can clearly see in our own lives and as well in the trending of the surrounding zeitgeist. Here in this country, as the run-up to the November 2020 election picks up momentum, there exists massive polarization and rhetoric on both sides of the conservative-liberal axis, with the constant reminder that no matter which way you happen to lean, the times indeed are a’changin. Most astrologers feel that the triple conjunction of Jupiter, Saturn, and Pluto that comes up in mid-November 2020 will be the peak of massive societal change, and that we are in stage 3 or 4 of this major transition. And every one of us might in fact be going through a similar transformative cycle during these pivotal years leading up to 2020, depending on how vigilant we may have been. We will all want to recognize that this is the time to tune in to whatever is going on within our psyches. This month of July, with its strong inner focus, can be utilized to our great advantage if we resolve to take a profound look at what we have on offer, and at how we respond to others, and to the life situation that we find ourselves in. We win when we can truthfully state that we are following, at least to the best of our ability, the basic principle that the more awareness and self-knowledge we have, the better.

The Solar Eclipse in Cancer taking place on July 2nd is powerful in and of itself, because an eclipse is considered an extra-potent New Moon, and also because a number of outer planet energies are emphasized, including Pluto and Saturn. Saturn is opposed by the Sun and Moon, and aspected by Jupiter and Neptune, themselves in square, as they form sesquiquadrate aspects to Mars in the first degree of Leo. Saturn and Pluto are also exactly aligned by parallel declinations. This implies massive structural transformation for society and for individuals as well, who are after all dependent on the surrounding social matrix for many details of their daily life. This has been going on all year, and everyone is feeling it on some level, with some more conscious of this than others. Because Mars is also conjunct a slowing Mercury, a conjunction that perfects in the timing of Mercury’s station to retrograde motion taking place on July 7th, the early going of this month will be in fact, no idle summer frolic, but rather will be characterized by getting down to some serious internal business. You will want to be asking yourself who you are, and where you are heading, and why, looking deep inside yourself for the answers.

The Lunar Eclipse of July 16th is another powerful time, when also Venus is directly opposed to Saturn, bringing concepts of limitation, dedication, and observing boundaries to relationships and to aesthetic endeavors. Because Saturn in combination with Pluto is again emphasized, this entire month is a time of massive transformation and growth. Also, the Sun and Moon at the 24-degree mark of Cancer and Capricorn are matched by two new planets, Eris and Haumea, at the same degree of the other two cardinal signs, namely Aries and Libra. These were officially named as planets of the dwarf persuasion in 2006 and 2008 by the International Astronomical Union. Although little is known about these new bodies, my research on Eris, characterizing her as a Feminine Warrior in support of soul intention, has been well received. Eris encourages each individual to stand up for themselves, and for the values that they hold inside, that run deep, constituting an important life mission, that which you cannot not do. Haumea, along with the other newly named planet beyond Pluto in the Kuiper Belt, called Makemake, has to do with profound connection to Nature as a spiritual path. Since this Full Moon eclipse makes a precise grand cross with Haumea and Eris, there is a great likelihood for even further predominance of earth issues and animal rights concerns to arise in this mid-July timing. As is becoming more and more recognized, climate change is THE issue of our times, one that requires an attitude of “all hands on deck,” as it were, in response to the accelerating global threat. An eclipse is said to last six months in its effects. This summer and fall we will likely see the issue of climate change even more widely acknowledged.