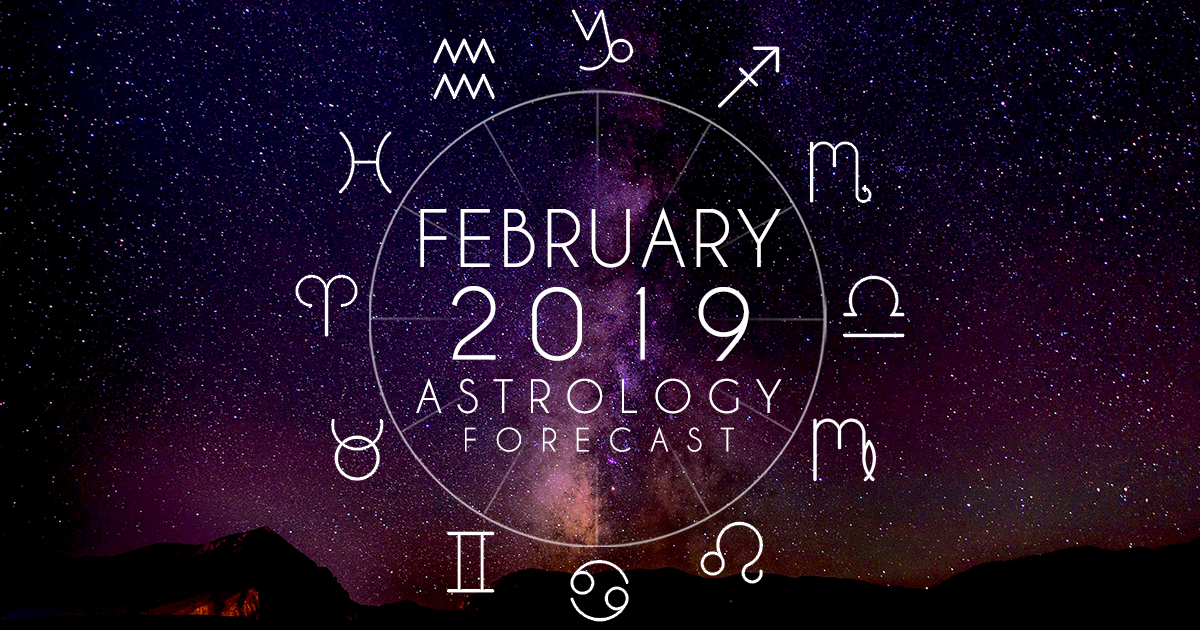 A February Month of Magic, Mystery, and Practicality

Posted on January 31, 2019 in Overviews |
By Henry Seltzer for ASTROGRAPH Horoscopes

This month starts off in the aftermath of a powerful Lunar Eclipse, and this is followed by an extremely potent New Moon that takes place on the first Monday of February, at 15 plus degrees of Aquarius. This New Moon fixed-sign energy is flanked on either side by Neptune at 15 plus degrees of Pisces and Saturn at 15 plus degrees of Capricorn. These two outer planets, each in their own sign, bring the numinous and otherworldly energy of Neptune down to the hard-knocks reality of Saturn. This implies recognizing the fundamental truth that we are, in essence, “spirits, living in the material world,” and that we also must be willing to take our physical 3D presence here quite seriously as worth inhabiting to the fullest. We can do this by striving to create an amalgam of Spirit and matter as we go about our daily tasks and prepare to fulfill our future goals. The Aquarius New Moon also brings all the outer planet energies into play, including Saturn. It is important to note that Saturn is precisely parallel to Pluto, a factor of connection between them that gets stronger as the month continues to unfold, and that stays active until early summer. With Uranus also triggered by the recent Lunar Eclipse, and by Sun, Moon, Venus, Mars, and Chiron in the February 4th New Moon, we have a full complement of outer planet energy on board with us this month. And this presages continuing massive structural transformation for our society, and also for ourselves.

In this intensely powerful New Moon configuration from nearly the beginning of the month, the other mighty emphasis on Pluto is represented by the highlighted square from Eris to Pluto, This narrows to less than a degree by the timing of the Virgo Full Moon of February 19th. This Full Moon also features the Sun and Moon in aspect with the awakening and trickster energy of Uranus, and also in aspect with Chiron, the Wounded Healer, newly in Aries. This makes the last ten days of the month both exciting and also, to some extent, filled with angst and awareness of our internal wounding. Considering for a moment just the Eris-Pluto square in the February 4th New Moon configuration, this is also a Mars-Pluto square, because Mars occupies the same degree in Aries as Eris, greatly enhancing this entire interaction. The message of prominent Eris is that each one of us must consider where our deepest values lie, and proceed to act from this standpoint, and from this standpoint alone, ignoring other voices of illusion and distraction that might threaten to throw us off course. And, with Pluto and Uranus both so greatly highlighted, this reminds us that the Uranus-Pluto square alignment that so aptly characterizes this decade remains active, right through to the potent configurations of 2020. We are still struggling to understand the massive ongoing structural transformation of the society in which we have our being, and as well our own part in this great shift. We, too, will find that there is something that we will have to give up, some part of our life that no longer serves us, as we head – over these next twelve months or more – into our next major phase.

Another of these new planets that was officially named by the IAU as recently as 2008 is also highlighted in the configurations of these next few months. That is Haumea, earth goddess of fecundity and protean flexibility, and profound connection with Nature. The Eris-Uranus midpoint remains in close opposition to Haumea, now at the 26-degree mark of Libra, until mid-April. We may therefore expect further emphasis on earth issues, and on the fight to save the planet from catastrophic climate change, as we have already been witnessing in this infant year.

With Chiron also highlighted this month, just as he returns to Aries, we also might expect issues of early wounding to come to the fore, perhaps exacerbated by a form of future shock, as we contemplate the situation of our culture, and of our planet, virtually headed over a cliff. The good news is that once you can see that the universe always has your ultimate progress in mind, action is far easier to take for exploring your own deep and hidden places within your psyche. The committed desire to do so is half the battle, and this intention, if carried to its logical conclusion, will allow you to more fully accept yourself, warts and all, as you make your way into the uncertain outcome that lies ahead. You win when you have faith in yourself, and in your process, and in your resolution to keep on forging onward, no matter what.