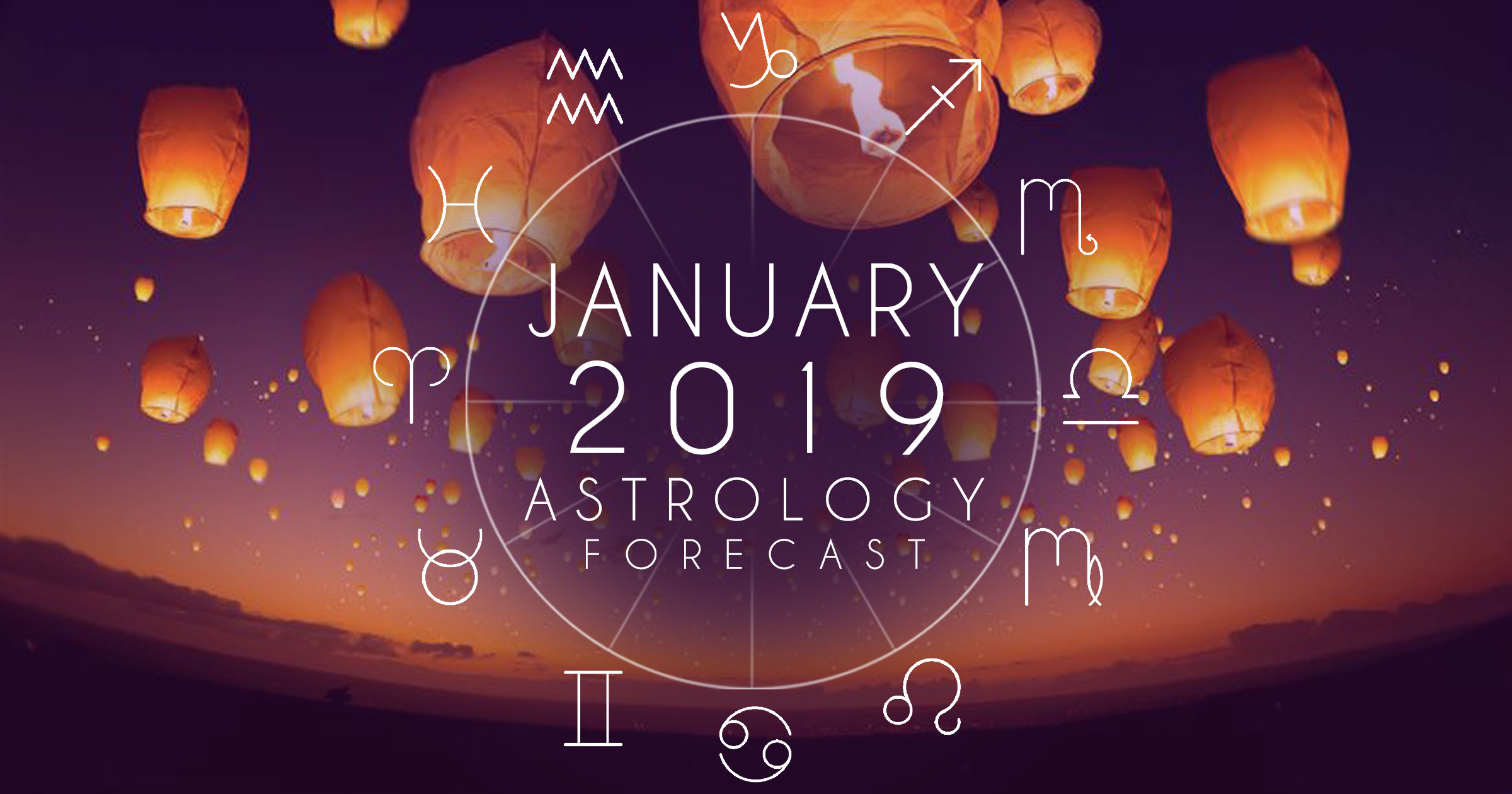 A January Month of Illusion, Recognition and Transformation

Posted on December 31, 2018 in Overviews |
By Henry Seltzer for ASTROGRAPH Horoscopes

This January month, featuring two powerful eclipses, represents in many ways a continuation and an intensification of the transformational thrust of the past few weeks and months of the old dying year. The New Year will not be easy, far from it, but by picking up where 2018 left off, it can definitely prove satisfying if your major theme is your own evolutionary advancement. And, as noted astrologer Alan Oken is fond of saying, this form of personal development is “the only game in town” for those who are paying attention. The society itself is going through its own massive changes right now, the birth pangs of a more inclusive and equal-opportunity society that is still to come, and this is reflected in the strong Saturn-Pluto parallel which gets even closer over the next few months, peaking in March, and then again in August. Pluto with Saturn implies a draconian approach to social ills, and a re-forming of the society itself, and of the patterns of our individual lives. On the societal level this idea of radical restructuring is linked to the response to global warming, another major theme of 2019 as we can see from the prominence of the new outer planet, earth oriented Haumea, operating in connection with trickster Uranus during the first half of the year. Other societal themes are likely to involve the illusions and idealizations of Neptune, also quite prominent in these January skies, and beyond. This leads to further exploration of the concept of “fake news,” outright lying and misinformation, as well as feelings of distrust in absorbing the statements of pundits and the news organizations that feature them.

Another featured alignment is the rather dire square between Eris and Pluto. This next year is of course the prelude to 2020, and the square, already quite close, will then become still more prominent. We might expect both a radical empowerment of the extremely potent transformational energies represented by Uranus-Pluto, in square until 2020, and the rise of individualists following their own inner compass to the exclusion of all else, in a dedicated fight for what they most deeply espouse. We have already seen some of that in the 2016 candidacy of Bernie Sanders, and also in the triumphant idiosyncrasy of Donald Trump, himself born with strong Eris. This maverick energy fights for what it believes, possibly supporting odd-ball causes until it finds its actual center. The rise of feminism, and of #MeToo/Time’s Up, and of women in politics are further example of the recent prominence of this Feminine Warrior rebellious energy emerging into the zeitgeist.

While the Solar Eclipse of January 5th is powerful, with the Sun and Moon in strong sextile to Neptune, supported by Jupiter’s square to this numinous and otherworldly energy, as mentioned above, and also features a very strong presence of Uranus, the Full Moon eclipse of January 20th is also an extremely intense lunation. This takes place at the 0-degree mark of Leo and Aquarius, and is therefore in some ways a harbinger of the Jupiter-Saturn conjunction at 0 Aquarius taking place on December 21st of 2020. We are being asked to take seriously our individual contribution to the social matrix that surrounds us, and to expand our viewpoint to include the previously unimaginable. The Sun and Moon make a T-square to Uranus, emphasizing surprises, unexpected breakthrough, and significant enlightenment. The goal through the last two weeks of January is thus to stay open to possibility. Numinous Neptune is again strongly aspected, and Pluto as well, by declinational connection, bringing his energy of through-going personal transformation to the fore. Pluto is parallel to Saturn, Jupiter, and Mercury in this Lunar Eclipse configuration.

A quite interesting configuration that I have discussed on FB Live and in this blog series over past months is re-emerging in this January context, and growing stronger over the first few months of 2019. That is the partile or same-degree opposition of the Eris/Uranus midpoint to Haumea, earth goddess energy of Profound Connection to Nature, and to natural law. Haumea is located at 26 plus degrees of Libra, opposite the midpoint in Aries, having reached it late last year, and is stationing retrograde there on January 24th. This brings renewed attention to earth changes, and to global warming as one super important issue. This is in fact likely to become the biggest agenda of the next decade as the struggle to reverse the presence of greenhouse gasses in the atmosphere becomes a crucial worldwide goal, ultimately uniting nations. This fight is obviously only just beginning, but already the liberal politics of the progressive wing of the Democratic Party is shaping itself around it, calling for a "Green New Deal." Perhaps it really is true, as a philosophical sage once remarked, that the best concept of freedom is to understand the direction that history is moving, and head that way.

With a new year upon us, now is a wonderful time to receive personalized astrological wisdom for your year ahead with a transit report.

It's been a very interesting, transformative year, and 2019 is sure to hold many more surprises and mysteries. Thankfully, the wisdom of astrology can help us all prepare for and navigate life with more grace and ease. See what's in store for you with a personalized astrological transit 2019 Forecast Report.