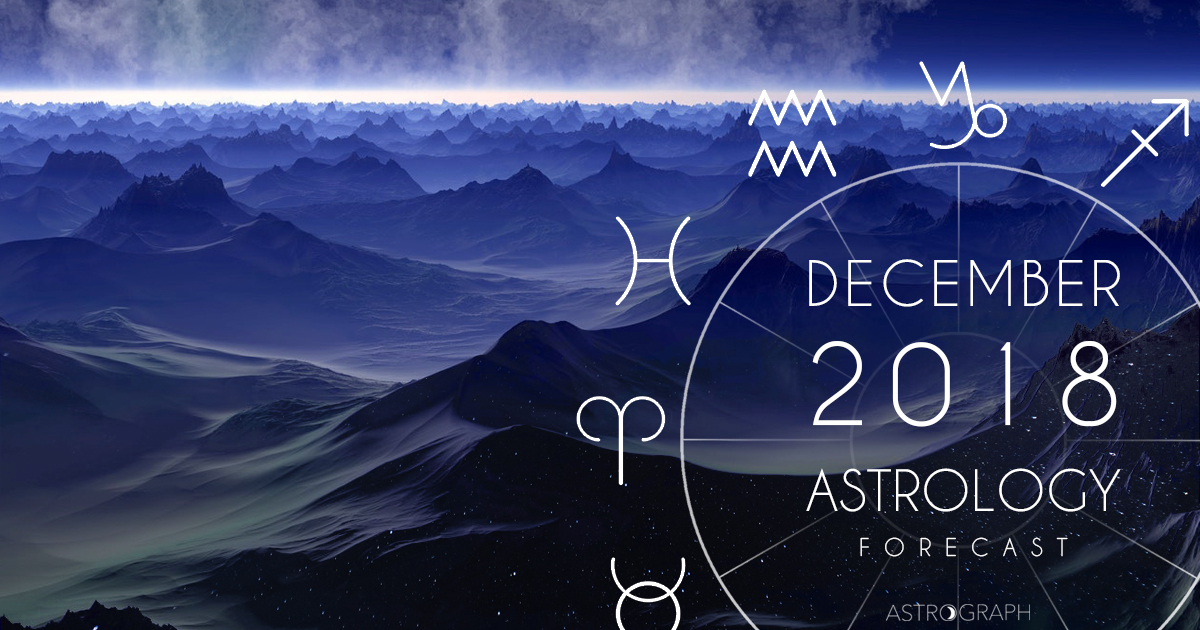 A December Month of Looking Within, Action and Transformation

Posted on November 30, 2018 in Overviews |
By Henry Seltzer for ASTROGRAPH Horoscopes

The month of December is an exciting one, astrologically speaking, and presages a startlingly intense year of 2019 ahead. It features the continuing retrogrades of two inner planets, Mercury and Venus. The Mercury station to direct motion takes place on December 6th, the same timing as the Sagittarius New Moon, while Mercury does not escape its shadow period until nearly Christmas Day. Venus, even though she is in direct motion as the month begins, is still recovering from her mid-November station, only recovering from her retrograde period by December 16th. Venus additionally is in recovery for the first part of December from her late November timing of outer planet connection, being conjunct the new planet Haumea for most of the preceding month and opposite Uranus just as December begins. This implies a certain degree of introspection and spiritual impetus remains on our emotional horizons for at least the first half of the current month, with also an attempt to understand the underlying motivations of relationship in our lives. With Uranus involved, the realizations of this initial time period could come upon us rather suddenly. Then, too, as Mercury stations on December 6th the messenger planet is in partile tine to Chiron, and also inconjunct to Uranus, indicating that old wounds could come up for renewed attention and steps toward at least partial healing. There is also a definite pull toward an action orientation, because Uranus and Eris are both involved with an opposition across the zodiac to Haumea and the station degree of Venus, in late Libra. We are enjoined at this time to discover where our deepest values lie, representing our own unique viewpoint, independent of consensus concerns, and to act constructively from this place within us, and from no other motivation. This is the true road to freedom, because you have articulated and taken a stand for what you most sincerely believe, and therefore no longer have any reason to feel powerless.

In the New Moon configuration from the late evening of December 6th, continuing into the next day, we have also a partile conjunction of Mars and Neptune in mid-Pisces, squared by the New Moon. This brings a sense of action to the fore, but it is action in gentle Pisces, and in connection with numinous Neptune, so that it is more likely to be action on the otherworldly planes of transpersonal energy, and within the unconscious process of the deep psyche. This is also the day that Mercury changes to direct motion, and as it does, trines Chiron, the Wounded Healer. There are thus many indications of an inner orientation, and a recognition old wounding, the residue of which may still remain as inner complexes, together with the healing sense of integration that can be the result of new awareness.

The Full Moon of December 22nd , at the 0-degree mark of Cancer and Capricorn, follows immediately upon the Winter Solstice of December 21st. Mercury conjoins expansive Jupiter, while Venus trines Neptune and Mars makes an aspect to the new planet, Eris, a Feminine Warrior archetype in support of soul intention. This presages for the year ahead another transformational time, when our every action is vitally important and not to be shirked or ignored. This is also a time when knowledge and information, including self-knowledge, as well as the consciousness of other planes of being beyond the physical, and of the moral strictures implied by natural law, will be a major focus. “Ye shall know the truth, and the truth shall make you free,” as we have it from ancient wisdom.

As we look ahead beyond this next year to 2020, the square between Eris and Pluto, already quite close, will become still more prominent. The triple conjunction of Jupiter, Saturn, and Pluto, late in the year, by mid-November, is square to this position of Eris, while Uranus and Eris are also still within the ten-degree orb for their 2016 conjunction that marked the presidential campaign of that intense summer, still going in early 2020. This implies nothing less than a revolutionary fervor to be getting on with it, for whatever it is that the planet and our straying culture needs in order to begin to heal from the excesses of recent decades.